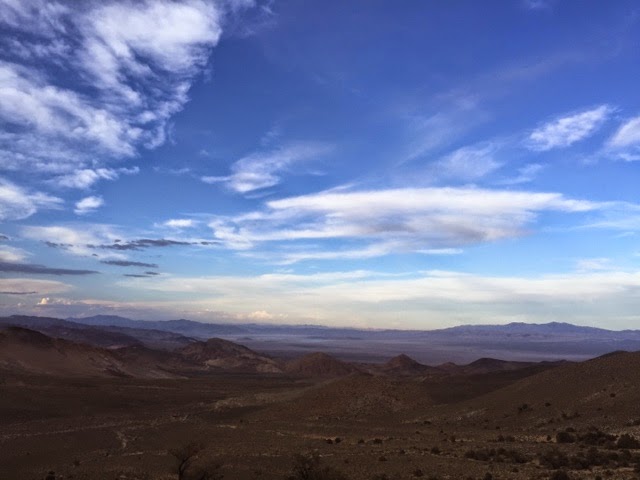 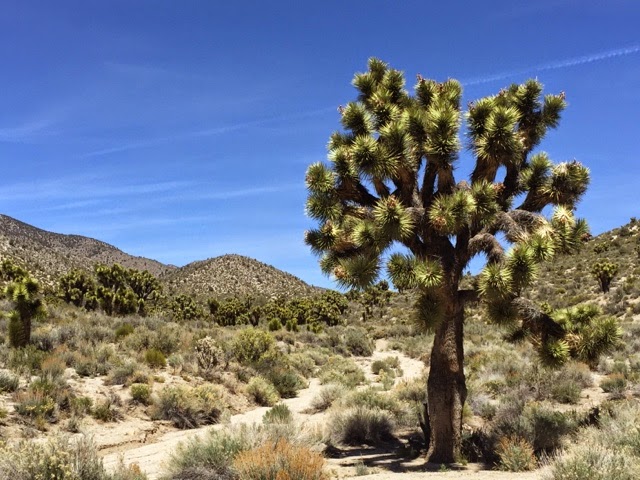 Within 2m of Willow Spring I passed an innocuous orange carsonite post and crossed into Nevada. The Great Basin Traverse now began. I followed the Desert Trail maps to guide me through the Sylvania Mountains. Mining dominated the range, however, Steve Tabor, author of the guidebooks, found a cross country route through the range using drainages to tie the highest peaks together. From thick Joshua tree groves to pinyon pine and juniper, the 8,000ft range showcased a fecundity not seen from the basins and valleys below. From a few thousand feet lower the trees looked like tiny black dots. 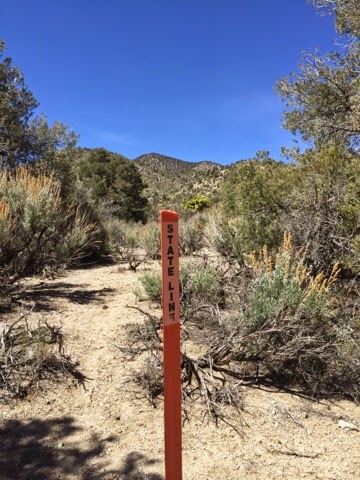 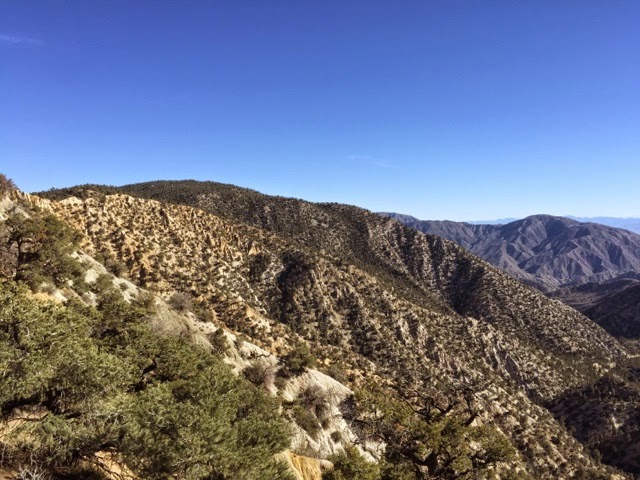 At Magruder Spring, I tallied up my food. After some mileage calculations I figured I was a good day and a half short in food. I had to make a decision. Do I take a cut off and bust out some high mileage to end the section in a less scenic way? Or do I hitch all the way to Tonopah, gather some supplies, and hike the Silver Peak Range and make the Great Basin Traverse a more quality drive route? I decided on the latter. But hitching to Tonopah on a rural desert highway straddling two states proved to be way more difficult than I expected. This hitch gave me the perspective I needed: I am in the middle of fucking nowhere.

And that's exactly what I wanted in this route. 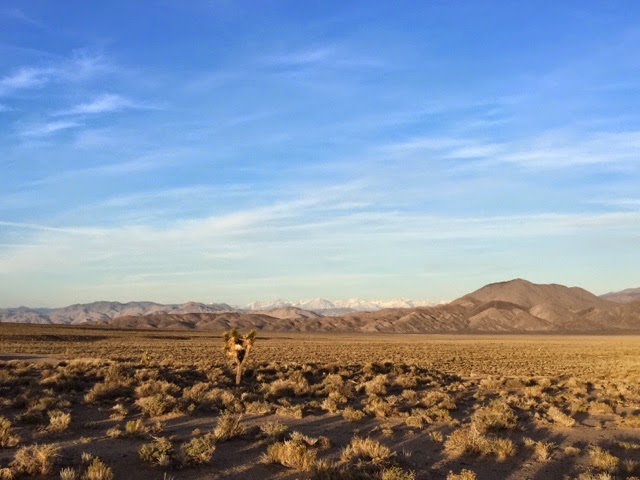 After 3 hitches, including the last one into Tonopah with an old showgirl/pot grower/chiropractor/gold miner from Alaska/Sierra Vista/Yuma/Las Vegas in a gutted out Ford Astrovan with a dog named Taco Bell, I finally ambled into Tonopah. I tell you, that was the only hitch I've had where I felt really uncomfortable. But I truly needed the ride. So, after re-grouping, assessing my needs and the hitching situation I decided to trek southbound and reconnect from where I initially hitched from. I figured that way I could get back on the route way sooner. 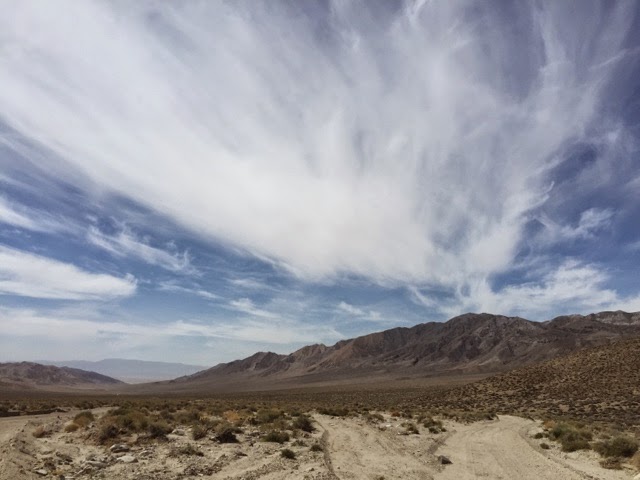 There's much of this route that is 'on the fly,' or adapting to what is in front of me as it happens. I under-stocked myself with food due to emotions running high with recent personal events, a tad disorganized with the route because of personal events, and the Death Valley route taking a little bit longer than expected. I would like to hope I learned from this mistake, nevertheless, flexibility and being able to be resourceful and adaptable are of my biggest concern. 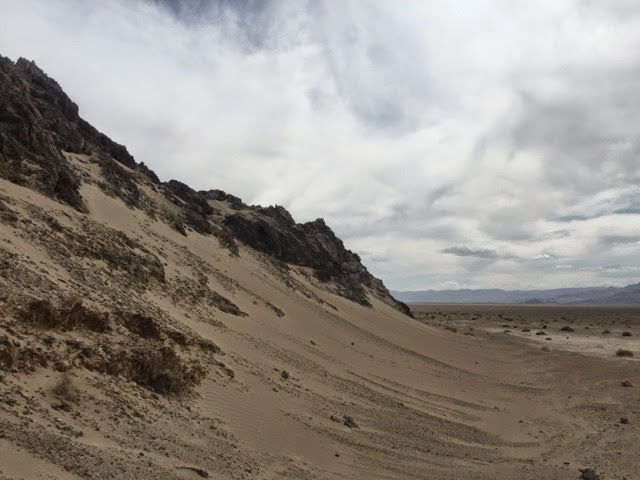 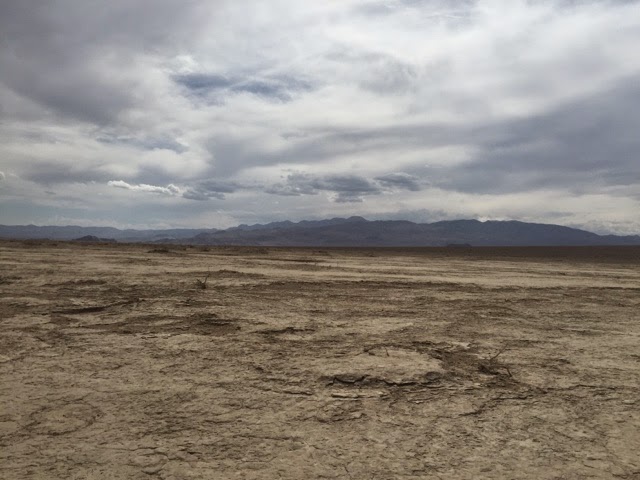 I left Tonopah relatively early and legged out a 35m day. Of note, I had another 40m waterless stretch. Despite the lack of water, leaving from Tonopah helped me out. Trekking through Paymaster Canyon under Lone Mountain and the Weepah Hills turned into a pleasant surprise. The colors of rock represented a palette of incredibly interesting shades of reds and blues. Then, after the canyon, I entered the expanse of an alkali lake bed. The various types of soils and dirt struck me as astonishing. The squishy type, the hard cemented sort, the fluffy, the dusty, the rocky, you name I crossed it. The occasional sand dune buffeted the arid-loving plants. Bristly and thistle-like, the shrubs clung to life in a moonscape. Most of the landscape was shaped by water but the wind left its unmistakable mark. Some shrubs' roots held the caked dirt in a piled up casing, as the windswept sand left a circular furrow around the shrub. I had seen the Devil's Cornfield in Death Valley, so with the similar shapes that these shrubs made I dubbed the round, big clumps Devil's Haystacks. 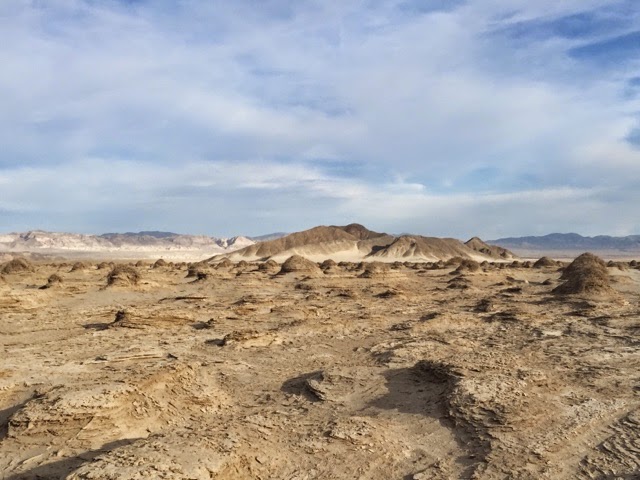 Unbeknownst to me, Silverpeak is a mining town still populated by miners who work in a Lithium Plant. The mine seemed relatively new and because of that the town still shown its old ghost town appearance. No new buildings, except portable trailers, nor businesses, just old junk, a boom town starting back up again. The stench of hot springs sunk the air and metal scrap yards littered the fields and lots. I camped on a barren ridge line anxious to get to the mountains.

Up early the next morning as the miners and their beefy Ford trucks lumbered up the newly graded road. I pushed hard to get out of the unsuspecting traffic. The good thing was that I found 3 springs, the last of which came out of a giant cave. From there I went up Argentite Canyon with purple basalt rock formations peppered with green and orange lichen. A few old miner's cabins, a tagging of Piper Peak, and I flew down to Big Spring, where I sat beneath a large sagebrush and had a five minute staring contest with a young jackrabbit. He couldn't quite gather what I was as he nibbled the green grass near the rivulet. He even stood on his hind legs to observe me more, his nose wriggling constantly. 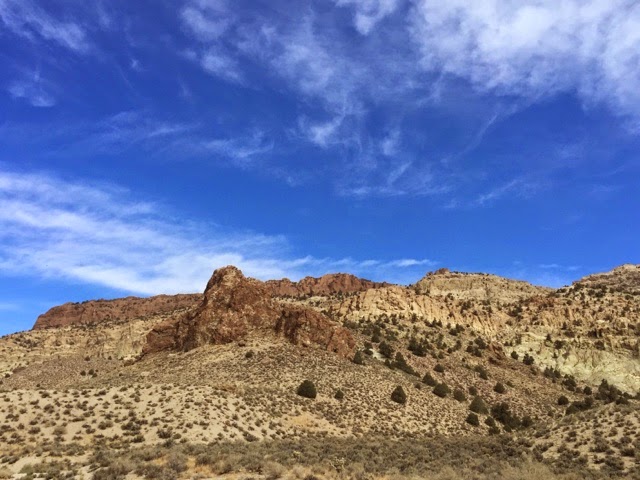 I left the spring fat with water. Up into the Oasis Divide via the Desert Trail and eventually found camp on the crest and a wide saddle. I was blessed with a beautiful sunset. Thunderheads loomed to the west but I could still make out the White Mountains. Snow dappled the chutes and the northern aspects under a pink and blazing orange sunset. In the far west I could see the High Sierra cloaked in a purple haze. I could even make out the ubiquitous serrated ridges of the Sierra and the Palisade Glaciers. I relished the thought of why I was on this route, of being so far away from the popular places and still finding this unknown and unseen beauty. With everything that has been happening with me personally lately, I simply stared into the Sierra so faraway and thought 'What if?' and 'Why couldn't?' I owe the High Sierra something. The clouds moved on, the cloak of darkness quickly dimmed the alpenglow, and I fell asleep with a whistling wind singing to me. 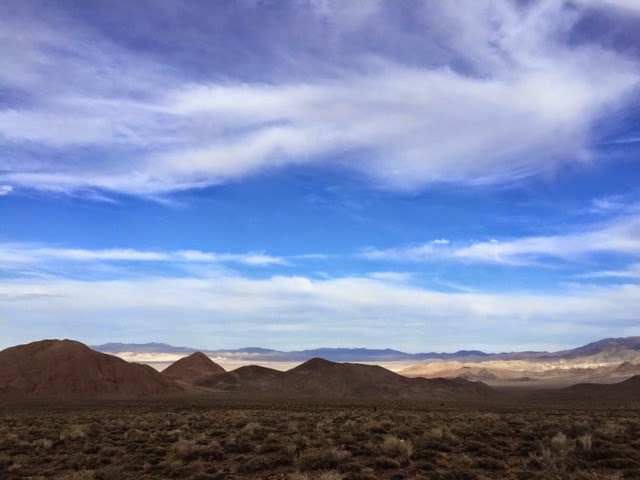 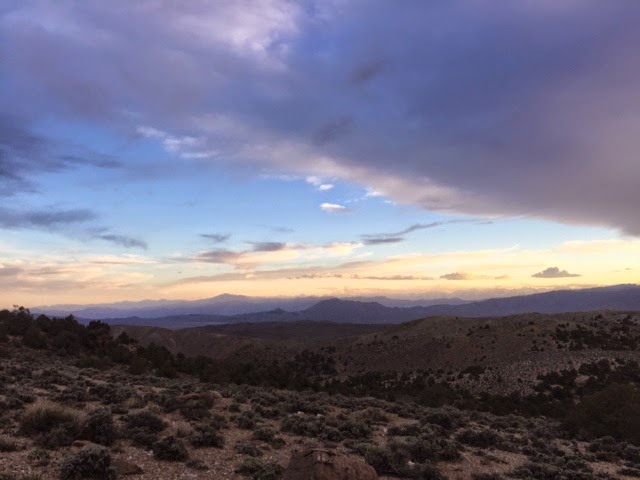 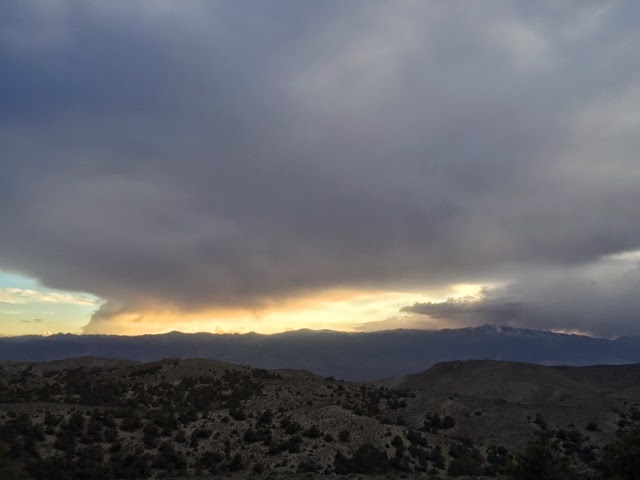 Posted by dirtmonger at 9:23 PM