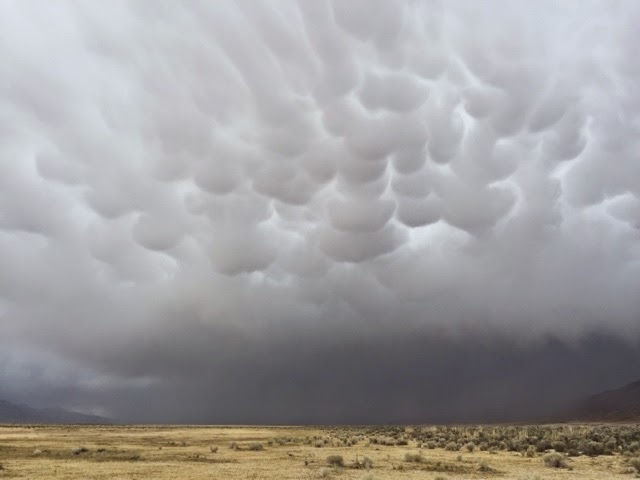 Strategy is difficult to implement when emotions get in the way, when you really feel the need to be outside. But if I learned three very important things last year they are to not force things, listen to the truth Nature presents, and to not be so hard on myself. 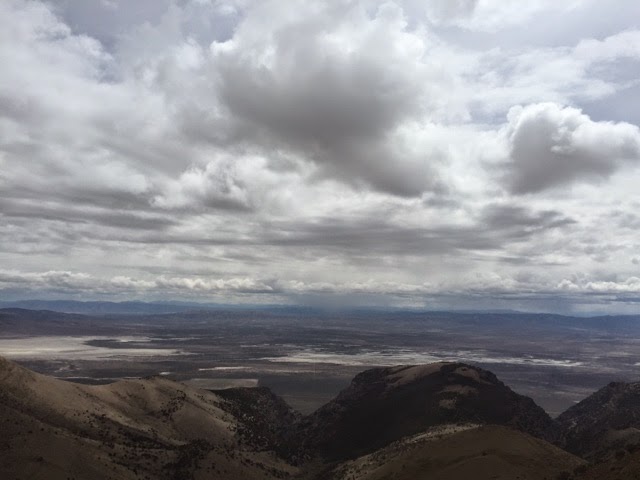 After three long days in Eureka waiting out very unstable weather, I left town in hopes of traversing the Diamond Peak Range and the Ruby Crest, the latter most easily the highlight of the Great Basin Traverse. I hiked into the town of Eureka on an incredible high only to have my momentum waylaid by my early-ness of the season on the GBT and the weather. My mind caught up with me and my emotions settled. I felt cheated, lied to, because of the position I was in. Even though I know it isn't right for me to blame anyone else, and I won't; I had to make do and fight off these feelings.

I left under heavy clouds and a heavy heart. As I summited the crest of the Diamond Peak Range, a storm smoldered from the west. Grueling winds and puffy, dark clouds slammed into the ridgecrest. I took coverage beneath knobs between saddles on trodden wild horse trails, the air redolent of blooming sagebrush and dank horse apples. Diamond Peak loomed within a short distance away with clouds and vapor curtains smothering the aptly named peak. Suddenly, little pellets of hail fell, the wind whipped with gusts pushing 50mph. I could see the summit so close, so attainable, yet I knew what lay ahead of me: 25m or so along a severely exposed ridgecrest in inclement weather. 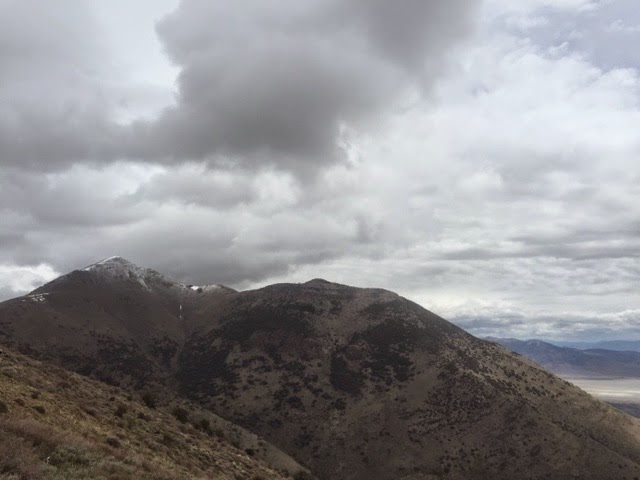 I scrambled down a broad ridge plunging steeply into a beautiful canyon. Water flowed in a small creek, babbling peacefully, as I picked my way towards Newark Valley. I felt safer under the dark skies. I ended up hitting a paved highway and walked it a few miles. I had wanted to cross the Newark Valley dry lake bed but with the unstable weather the prospect of such a crossing seemed unreasonable. Dry lake beds when wet are an absolute bear to hike across. You'd be lucky to keep your shoes. And they're even worse to hike across in thunderstorms. No cover whatsoever. 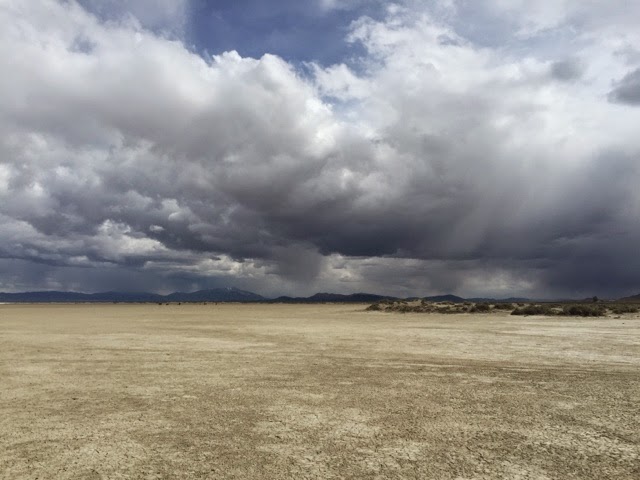 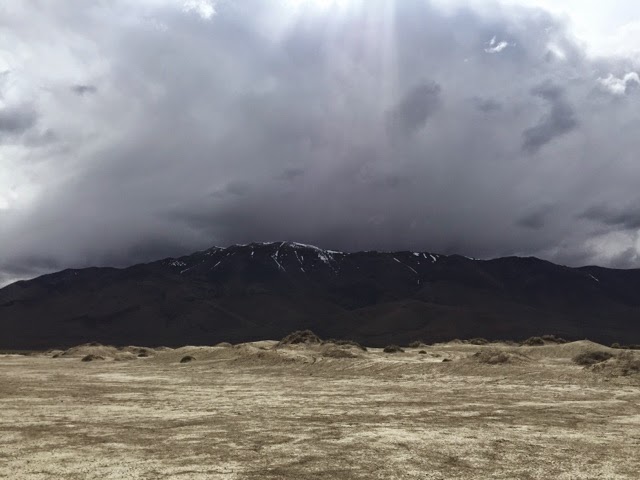 Nevertheless, I took a go. I needed a mission, something to train my mind on. I plodded on as thunderclaps pealed from behind me. I moved quickly on soft mud tiles, curtains of rain nearing me. Three large cells poured down on me, thunder reverberating all around me. After a few hours I hit the sage plains that had soggy meadows scattered occasionally throughout; due north of me the southern flanks of the Ruby Crest inundated with snow appeared imposing. This was my first observation of the 'Nevada Alps' and my first swallowing of the notion that I may have to take time off because of the conditions and the unstable forecast. I struggled with what I was going to do. The cloud level was around 8,500ft and I would be above that elevation in the Ruby Crest for roughly 70 exposed miles. I honestly didn't think I could keep warm with the winds and cold temperatures. After 33m I laid down under my tarp on the plains of the basin and told myself: you need to be nicer to yourself. Rain poured down all night. 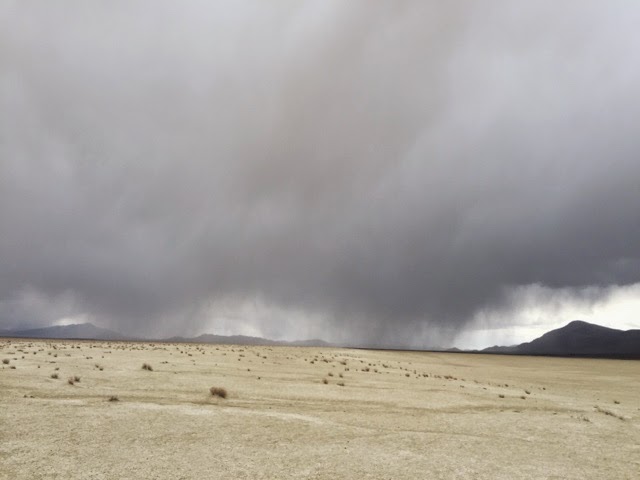 The next day a dirt road turned into a 'really good' dirt road and I noticed a large mine near Bald Mountain. I thought this to be negative not because of the mine use itself but rather I knew it meant if I stayed down low in the valley I had a real road slog of a hike. I racked my brain. I was still 85m from the town of Elko via the road slog. I would hike, then look all around me and understand the predicament I was in. I knew I could not live with myself if I missed the Ruby's. It would be akin to missing the High Sierra on the PCT or the San Juans on the CDT. I felt a bit defeated. Then, I broke down. The same feelings I had in that Eureka motel room began to resurface. I felt cheated. 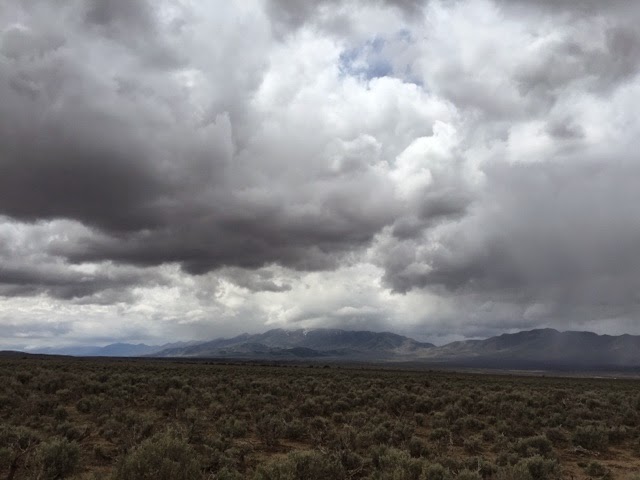 But this is my responsibility, my actions, and I have no one to impress out here. I have no one to blame. I chose my path, ultimately. My footprints leave a trace of me: my integrity, my character, and my honesty to myself. Since I already knew I'd have to sit out some days at some point since I was 13 days ahead of schedule, I told myself that I wouldn't stick my thumb out, however I would agree to a lift if someone asked what the Hell I was doing out here. After a slew of trucks, one finally stopped.

'Are you sure you WANT to be hiking this road. This road is not ideal for what you're doing,' says Randy.

I pointed up to the Ruby's. 'I'm supposed to be up there,' I tell him.

I hopped on in and like that I was on my way to Elko. And I'm glad I did. The road turned to pavement within a few miles and I understood clearly what I would've been in for if I hiked all the way to Elko.

I decided to wait out the instability in the weather until things warmed up.

My own footprints are all that matter. 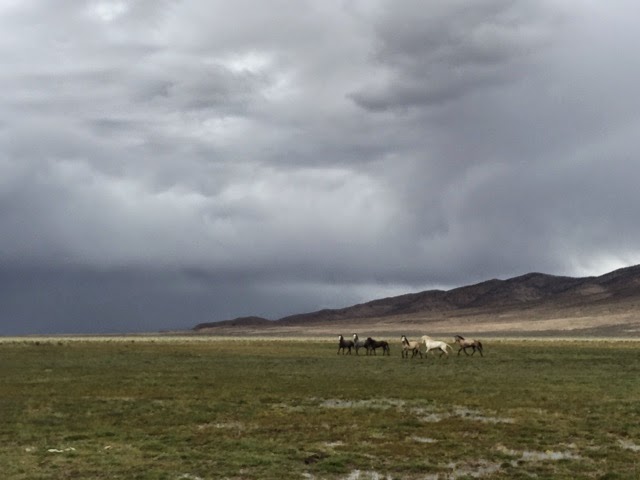 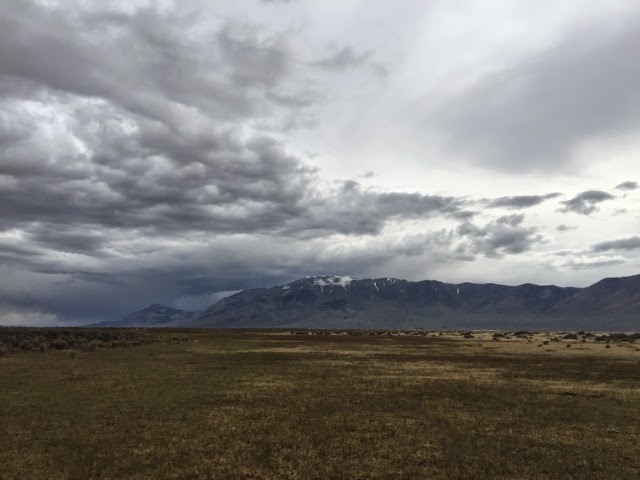 Posted by dirtmonger at 8:54 PM