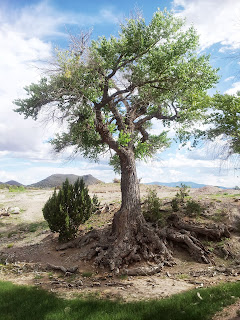 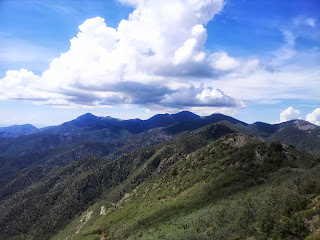 Forced to zero in Magdalena as I got there on Saturday afternoon, I fell for the quaint, small, dusty town. A water shortage has the town on high alert for conserving water, however, little did they know the upcoming week would be a really wet, monsoonal one. In the end, I was glad to rest there as the next 230m or so it would be tough to have a place to chill.
I left Magdalena and entered the namesake mountains. Steeply up, 3,000ft, I persisted until I hit North Baldy Peak. Massive, porous rock walls clung to the high reaches of the Maggie Divide unknown to the wayward valley viewer. A grand vista lay to the west and south of my next leg. Again, dark clouds hindered my view of the upcoming mountain ranges. At the apex of the Maggies a forceful storm moved quickly in. Up there on the crest sat an observatory and a lightning research center. I wondered if the scientists ever got used to the reverberating thunder and electric lightning. Because I sure as hell have not yet!
﻿
Moving along the crest road thunder clamored the thin air, now thick with water vapor. I picked up my walking pace into a slow jog. The rain fell harder as I found my trail off the Maggies. I descended quickly before stopping under a humungous doug fir, lightning being the culprit for stoppage. A white strike hit the alpine grass a couple hundred of feet above me, the thunder grinded like cogs in a generator. My hair on my neck stood on end, and then marble-sized hail fell. In a flurry of white, hard-hitting pellets I wended my way down switchbacks. The trail became a creek and the giant mechanical machine echoed violently above me; I was in the belly of an electric beast. I moved faster becoming drenched, but I needed to get down. I flinched at every white flash and clap. I yelled at the sky: 'Give me BLUE!'
﻿
After an hour in the mess, and I somewhat down the mountains, blue sky and sunshine blared from out the clouds. I kept walking, wanting to dry out, amongst short grassy plains speckled vibrantly in green. In a sandy wash, just below a cholla choked plain, I stumbled onto a coyote den. Two pups screamed from out their hole, the mother sprinted towards a hill top. One of the pups kept on nagging me from about 75ft, barking and yipping and growling. I kept on trekking but quickly. Soon the barks became a distant murmur, the ululating wind of the plains and washes enveloping all sound. 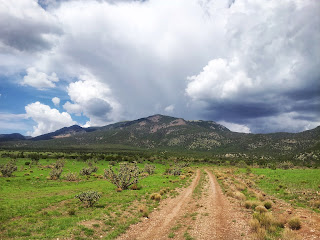 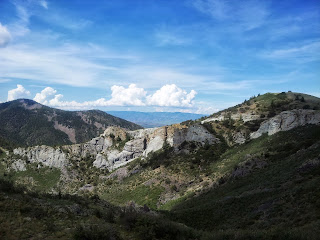 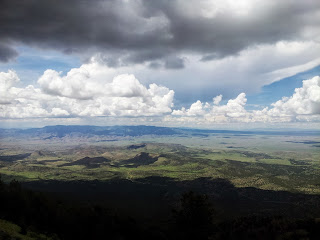 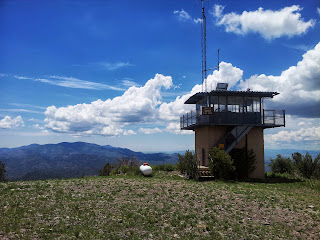 The San Mateos loomed in the short distance. The range became black as the day came to an end. Another nasty storm hammered me in the night. A hundred feet or so from my tarp the dry Big Rosa Canyon became a roaring flood. In the morning, I walked up the flood plain littered with detritus from the minor flood until I hit Potato Canyon. Another 3,000ft up and I was on the crest of the San Mateos but rather than trail I followed a dirt road, my views of the valleys stunted by the tall pine forests lying along the road.
﻿
The San Mateos are distinguished by 2 sides: the northern being a rolling gentle range, while the southern undulates ruggedly from apex to saddle. In between the split, however, after an initial steep plunge, long ribbons of canyons flounder lazily to their connection. Broad cottonwoods line some of the drainages and stout ponderosas are situated in green glades, simply beautiful and peaceful. The air was muggy and sweltering. If I wasn't wet from rain, then it was from the humidity, drenched actually. My tough day ended after climbing up 2,500ft, only to go down another 1,500ft to climb back up again, until I camped on a saddle beneath the San Mateo Mountain lookout tower. A large bear scurried away from me as I climbed tom the saddle. Night fell and I stayed alarmingly awake mainly from an electrical storm that surged overhead and not just the bear. My nerves had begun to get shook from all the tempestuous weather. 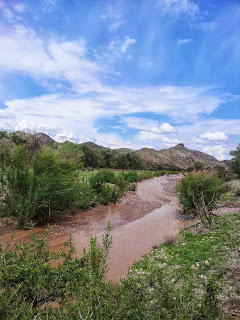 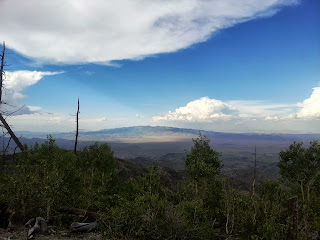 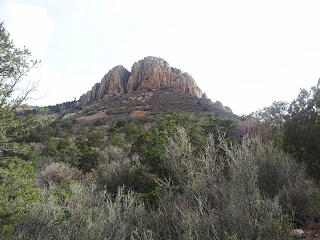 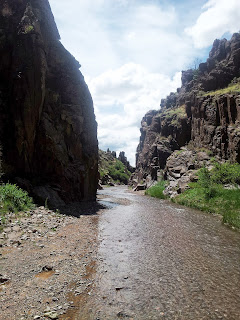 The southern edge of the San Mateos broke completely off, or at least they appeared to do so. Rock and talus slopes funneled down a sharp gulch, straight down the mountain the trail descended. Water rushed from pockets in the rocky talus giving me fresh rain water to drink. The range ended in high alluvial plains the fell sharply into San Mateo Canyon and neighboring Monticello Canyon. Once in Monticello Canyon I noticed the effects of major flooding. Muddy water forcefully rushed down the creek channel. Mud caked the dirt road and grass and other shrubs flattened from the high water mark. The picturesque canyon was very verdant and the air was redolent with Spring's aromas yet everything seemed to be in disarray. Soon the road was completely washed out and I walked up the middle of a low, muddy flood. The murky water was warm and tiny speckles of dirt and other crap pattered my legs. My socks became filled with sand and pebbles. Through the canyon narrows I waded, the sight became tropical with a thick bosque and green plants, as well as the cawing and tweeting of seemingly far-out birds.

I hit the NM State dirt road highway hoping for an uncertain hitch. My prospects seemed bleak as in the hour I waited not a single vehicle passed. Since it was mid-afternoon and I had no shelter I decided to push on. My plan was to attain the paved, lonesome highway some 20m or so away and try for a potentially 2 vehicle hitch. Thunderstorms weighed heavily on my mind and the urge to stay ahead or to use clear weather for mile gainage was utmost on my mind. I left the lonely highway and hiked crosscountry up a juniper-lined ridge. In Knisley Canyon, at a windmill, I harkened to waterproof my self and gear, for a giant cell of cumulonimbus hovered over me.
These storm systems are strange. I can feel the soft wind down at floor level and I could tell you which way the system is moving to or coming from. I use this to 'time' my way in proceeding on hiking. But times, in sudden, quick changes of time, these clouds form without notice, instantly. I know the storms come and go, fleetingly, but then time seems to stop. I imagine the weight of some of these enormous clouds must be beyond comprehension, in fact, I know they are.
I hiked up Knisley Canyon trying to get as far up it as possible before I knew I would have to hunker down for cover. The storm hit and sat. Rain fell in a deluge in a matter of seconds. The canyon had little coverage so I settled for an broad-canopied alligator juniper. The hills around me were painted a bare green grass. Day became night, thunder rumbled, and I huddled even closer. The heavy rain became heavier, lightning struck all around me. I hope it would be a short dump. 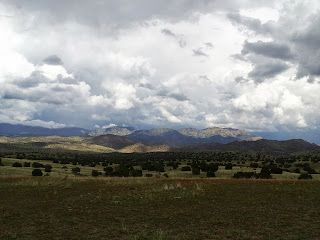 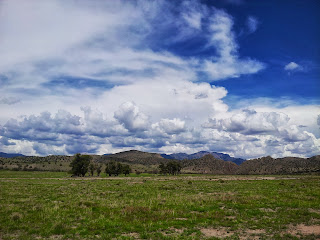 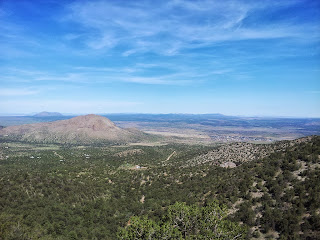 An hour passed. I could see the system circle in the heavens above. I realized that the sunshine I had been walking in earlier was in the middle, or the eye, between 2 large cells converging on each other. I now huddled up underneath a lone tree in a bare canyon waiting for the end.

A flash of lightning hit on the hillside opposite the canyon, only about 150ft or so. An explosion of mud erupted in the air; the white flash and bolt and roar of thunder all hit simultaneously. I jumped from my crunched position. I yelled out: 'Fuck all!' I instantly became frightened. For the next 2 days whenever I blinked I saw that particular white flash of lightning. My heart raced, my adrenaline pumped and I began to think erratically. I had to make a move, so I thought! CRASH!!!! Another white flash and electric crunch hit near me. I thought the tree behind me got struck! I could hear, wait, no, I could feel the electricity. I leaned back on the dirt and closed my eyes. I mentally embraced the scene in my mind's eye. All the noise, the feeling of the air. Then, I realized the loud rush of things wasn't the wind: Knisley Canyon had become a roaring river. A muddy torrent flowed down a chasm some 50ft from me. Shit...

The tree I hunkered under became flooded. My ass sat in cold water. A gnat flew directly in my eye and I let it dig in. I zoned out on the hillside across from me and every time I blinked I saw that white flash. Another hour and a half...

Suddenly, a window to the east opened up and the rain lightened. I sprang to my feet and ran up valley. I sloshed through the mud and puddles. Unfortunately, I had to ford the flooding creek a couple of times, I had no choice! Walls inside the creek channel gave way, everything became super-saturated and liquefied under its sopping water weight. I kept up a brisk running pace, breathing in a calm, meditative manner. I had to be in a better position. I couldn't wait for that fleeting, violent storm to end, especially with the possibility of getting struck by lightning.
I ran. I ran, on and on for an hour. A loud electric whirr filled the air. The noise was so loud I thought it was a giant laser beam being shot, you know, like the ones from cartoons or comics from the evil genius. I ran up a slippery, muddy hill and saw a cow pond. Hundreds, maybe thousands, of frogs and toads croaked so loud it brought a tingle to my spine, like electricity from lightning. At least they were enjoying this deluge.

I meandered way off route and settled up under another large juniper for the night. I laid on my sleeping bag feeling quite gloomy. But during this state of despair I surmised my experience as thus: 'In order to do great shit, sometimes one must endure great shit.'

Rain continued throughout the night. Around 5am I hurriedly broke camp and hiked onward up drainage. I had an idea of where I was at but I couldn't continue up to the Divide and the GET. Mist clung to the trees and drainage I was in, while on the Divide clouds still grumbled and groaned. I couldn't take the chance, plus I was still pretty well shook up from yesterday. I made my own alternate, with my own bearing and did a shambled mix of forest roads and crosscountry until I hit the pavement. I walked towards town and saw only 3 cars, all going the other way. All the way to Winston, by foot...

Sometimes in order to do great shit, you must walk counter-current normal to the flow of others. 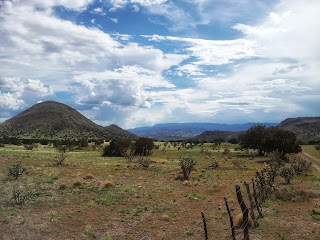 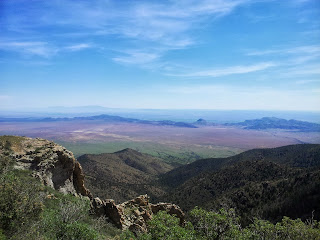 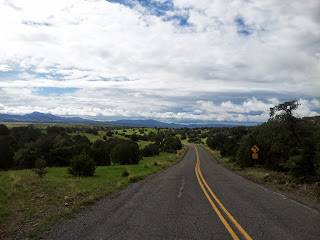 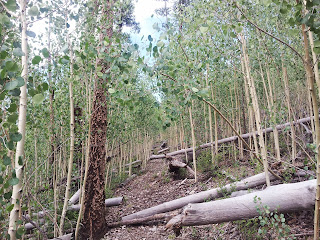 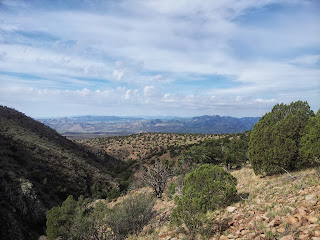 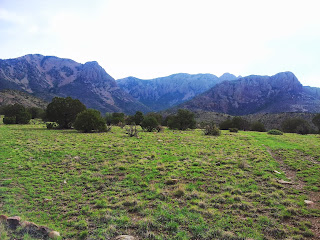 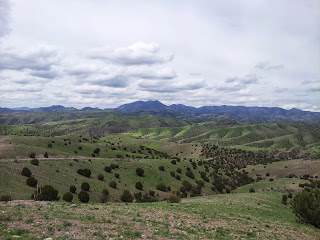 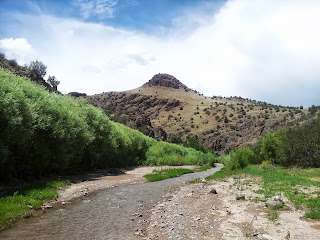 Posted by dirtmonger at 6:46 PM