Back on the CDT, I headed south along a new section of trail. I was going to follow, and loosely follow, the Northern New Mexico Loop created by Brett Tucker, who also created the GET. I had gotten dropped off at Cumbres Pass from a sweet old German lady. She vibed with positivity and told me she moved from Germany to Chama when her husband died so she could be on 'Chama Time.' Coupled with this social interaction and the rest I had at the motel, my legs felt great, everything did actually.


The day went on uneventfully. However, things changed when, within 2 hours of each other, 4 Ride the Divide mountain bike racers trundled pass me. Friendly and exhausted, the managed the best they could with amiable chit-chat. Each of them wondered what the hell I was doing out there! I haven't seen much thru-hikers since the AZT, well only 2, and besides Lint and SOL the only other people who I can relate to on my adventure has been the long-distance mountain bike racers. So, when they passed me I wanted to go with them. I wanted to talk for long hours with them. The last rider, with a long, slow drawl from the South, said he just went over the 2,000m mark. I told him, "Me too!!" He chuckled at this coincidence and pedaled onward. 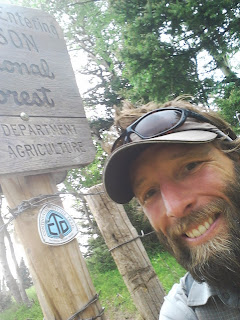 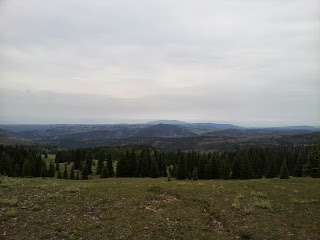 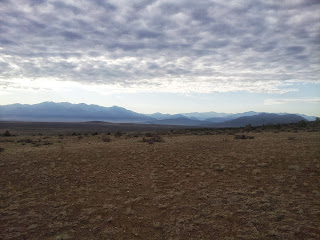 Though the sky was bleak and gray, from the crest of the Tusas Mountains I could see across the Taos Plateau and the Rio Grande Valley all the way to the Sangre de Cristos. With verve, I moved swiftly, determined.

In the morning, I woke up with another bout of diarrhea. Unexplainable to me, I backtracked the last few days of meals, interactions, and water sources. I had no other choice but to hike on. My stomach growled and grumbled more than the cumulonimbus clouds hovering overhead. Thundered boomed over the Cruces Basin as it thundered in my gut. My mood shifted to a mighty doom. All kinds of dark notions entered my head. Water sources all around me seemed to be dried up, as well. At the Rio de San Antonio I tanked up on 6L of murky, brown water and loitered in the shade of a willow.

I felt a bit better after my rest, but my plan was to walk another 14m to the highway and potentially go to a clinic.

Down a winding river road I went and ran into some horsemen and horsewomen. Heeler dogs and cattle ran around the trailers causing a minor chaos. A young cowboy handled 3 horses by their reins and kept them under control with stout arms. Another cowboy, this one older, sat on his horse drinking a Coors Light. His beer gut hung over the saddle horn. I admired him surreptitiously. The gals trotted their horses waiting on the boys.

As I passed them I blurted: "They got you workin' on a Saturday!?"

The young cowboy yelled out: "Hey!! We got an extra horse! You should come along!"

There was nothing more at that moment that I wanted to do other than ride along with them Indios on horseback, fighting the wind, shooting the shit, drinking crappy beer and getting fat.

My stomach rumbled as I laughed, and I thought I was going to lose a fart. I walked on.

I ditched the dirt road and went cross country. I ambled over grassland to a pine saddle between 2 pointed, volcanic cerros. I eyed San Antonio Mountain, a broad, saddle-humped mountain that loomed over the empty expanse of the Taos Plateau. At the highway, my stomach felt much better. And with the 5L I had left of the dirty water I decided to make a go of the bare plateau, not knowing how far my next water source. I knew the Rio Grande was out there somewhere; I just didn't know how far. 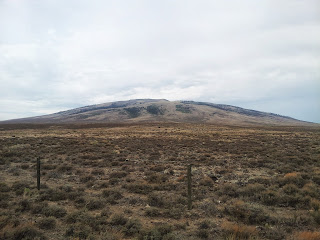 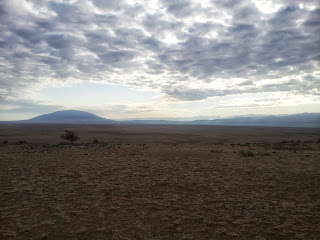 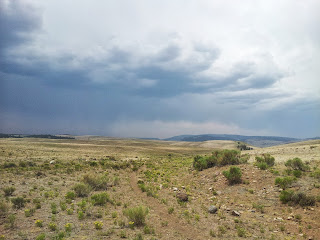 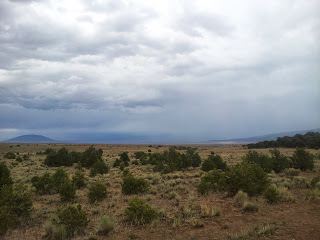 Isolation. Desolation. Exposed. All words that should be used in their most superlative to describe the Taos Plateau. Volcanic cones dotted the stark expanse. Their dark, tree-lined tops signified elevation change. If not for the trees' dark color everything would blend into one. The sky was constantly darkened from the marching of ominous clouds. They log-jammed against each other as they hit the high peaks of the Sangres. Thundered echoed violently in the empty plain, for their was nothing to catch the frightening claps. Rain pattered in large drops, the air turned cool, and the wind howled. I trodded along in pinyon pine forests which only made the wind seem sinister. I brazenly walked among the forests feeling the wind push against me. The rain came down harder and I walked on in defiance. I leaned into the wind and pushed; I was going to fight.


Out of the forests, my head ringed with the loud whirr of wind. The trees were no longer able to catch and harmonize such devilish gusts. My new role as vagabond was windcatcher. Every gust and gale went through me. The rain bounced off the bare expanse in the East, in front of me, causing clouds to erupt from the ground. I was swimming in a clouded fishbowl. I kept my eyes on the ground, hunkered my shoulders, and drove, drove with defiance. I kept an occasional bearing on a directional beeline to the northern flanks of Cerro de la Olla. From there I knew Sheep Crossing of the Rio Grande was not far off.

I couldn't make the coverage of the pinyons on the flanks of Cerro de la Olla. The train of clouds kept moving in crashing into one another. Ominous as they were, and predictable, I set up my tarp on bare, loamy knoll totally exposed to all the elements. I laid down, nearly 40m of the land conquered by my feet, and listened to the wind, as well as my stomach. One and the same. I felt lonely.

The morning went smooth. Around the flank of Cerro de la Olla, through thickets of sage, and some jeep track, I finally hit Sheep Crossing. From the rim I looked down in the gorge at the Rio Grande. I still had 2L left and I guzzled one of them right then and there. I scrambled down the ramshackle trail sliding down loose scree. At the banks of the Rio Grande I thought: "This ain't no Colorado River!" And plunged right on in. The cool waters rejuvenated my feet and legs. I carefully picked my way across, then scaled the other side along shoddy trail.

I decided to by-pass the Latir Peaks because of the sensitivity and ill-confidence in my stomach. I walked though the skirts of the town of Cerro, then Cuesta until I found a dirt road cut-off to the Forest Road of Cabresto Creek. Cars and trucks rumbled slowly by, all filled with campers. Because of the rain the dust from the road did not plume up. I could see face of all the people. Most with smiles, but all waved me. A wave of energy welled up inside of me. I really regretted not going into the Latirs but suddenly walking along this busy creek road filled with tourists and campers I felt like I was in the right place. I waved back at each car excitedly. Some cars stopped and asked me if I was okay. One lady even stopped and asked me if I lost a bongo drum. "No," I told her. She laughed and drove on but not before I could see the mysterious bongo drum in the back seat of her car.
I climbed up the dirt road until the saddle of Sawmill Mountain. From there I could see the Latir Peaks getting pounded by monsoonal weather. Now, I was really glad I was not up there. 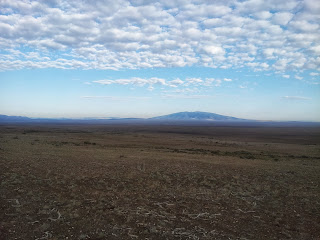 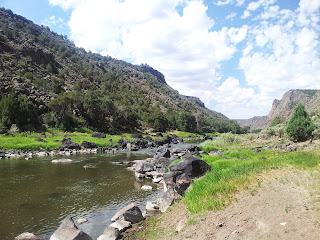 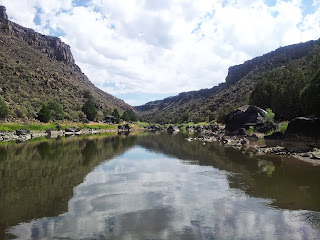 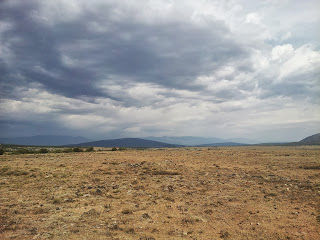 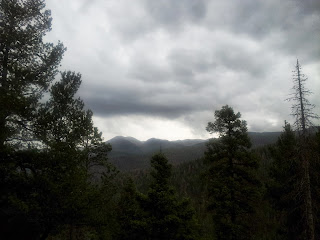 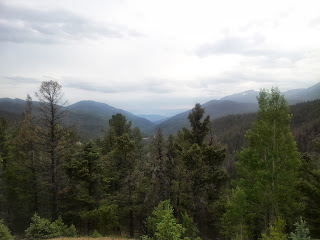