I have been a wanderer, a vagabond, my whole life. This realization is more evident to me while trekking this summer. I have floated in and out of people's lives. I have been positively impacted by them and I hope I have done the same. My time is brief, then I drift on.

Leaving the town of Tijeras was harder than expected. My first couple of days back on trail I felt intensely lonely.
Into the Manzano Mountains I went, now on a definite route. The mountains were lonely; nobody, not even a single footprint, imprinted their existence on me. The Manzanos rose steeply from the Rio Grande Valley. Rocky and rugged, I followed a trail tumbling along the crest, undulating on exposed ridgelines. At one point, from a high vantage point, I gazed west and followed the plains until brown alluvial fans swept underneath the Manzanos. My neck cricked towards my feet as the plains had a contradictory illusion of sloping downward into the mountains. If the brown, dusty terrain out yonder was seawater it was crashing along the shores of a massive island. 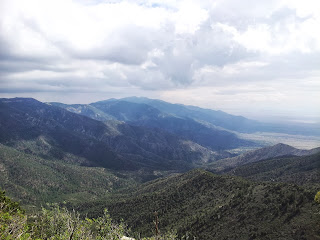 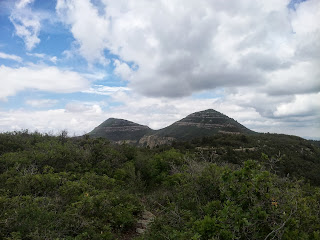 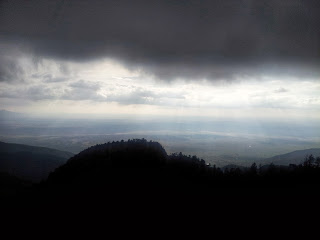 My mornings in the mountains were cold and humid. The air was heavy and the dampness clung to everything, every tree limb, leaf and needle. I, too, became drenched. The sun poked out of thin, low clouds crashing into the crest. Fog enveloped the high forest, the sun dimmed. I kept at it, walking with intent.

My second night in the Manzanos the wind howled and the occasional fat rain pellet would pelt my tarp. I was on a high, exposed ridge and was susceptible to lightning, but all the tempestuous monsoonal weather did was bark, no bite. However, it made for a fretful night of sleep. At one point, in the wee morning hours, I startled awake to silence. I said out loud to myself, coldly: 'The wind has stopped.'

The trail was littered with fresh bear scat and track. Sure enough, I ran into 5 bear in 2 days. At a spring, just off the crest, a cub and sow appeared. I left the spring immediately with the sow holding her ground. The next morning, I encountered a large male. He stood about 20ft from where I stood. I yelled at him and stomped my feet. He turned and darted the other way. He powerfully lumbered down the steep hill obliterating trees. Different than an elk in retreating with grace, the bear exhibited a pure essence of power. I remember thinking, 'Why should he be running away from me?!'

The ridgeline wended on and on, climbing up and down steeply. The views were stupendous and far-reaching. Eventually, the mountains petered out and I left the aspen and spruce forests for the pinyon and juniper savanna.

Shadows lined the stark contours of the arid land. In Sand Canyon, I followed tracks of a bear. Fresh as they were, I expected to see him, however, I would still be surprised to see him in that terrain. The rugged, torn canyon walls poked up higher the lower I went. Dark, ominous clouds moved in a battleship fashion. I hit the confluence with Abo Canyon, as a few bighorn sheep stood on knife edges on the rocky outcrop jutting into the canyon. Rainwater pools dotted the rocky crevasses and the muddy recesses beneath the salt cedar. A series of trains passed on the trellis hanging over the canyon, the sound of the engines soothing my inner, rushed tempo. 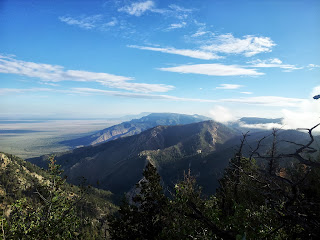 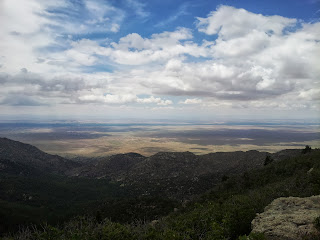 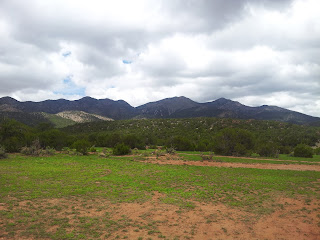 Out another lesser canyon, I found the bear tracks. Within about 2 miles I heard a scurry among the willows and a cinnamon bear hurried up the cliff and scampered in the open dodging pinyon and juniper. I yelled in a raspy voice: 'Lo! I've been following you! Long way!'

Low rolling hills and flat, large mesas dominated the scene. The occasional conical butte sprouted up; the scene changed. The wind whistled and a subdued peace resided inside me. I walked from windmill to windmill following a course mostly on lonely dirt roads and less on a crosscountry route. The land was barren but beautiful, even eerie. The clouds moved in a blitz krieg with ominous features--dark, puffy and low.

At the Puertocito de Bowling Green the Alamillo Wash drastically cut into an escarpment. It seemed all water in the basin funneled out through the outlet between the cockscomb. Cattle trotted away from me as I eluded the cowpies dotting the plain. I neared the Puertocito and spotted an abandoned homestead dug into the rocky hillside. The scene froze, all was silent save for the whistling wind and metal on metal creaking. I felt suddenly strange, even frightened. I could feel the presence of others, or spirits.

I moved on. Within a mile I found a large cistern tank, some 15ft tall. I climbed up the ladder and clung to edge trying to refill my water bottles. The reflection of the clouds showed on the still surface. I guzzled some slugs of water. Then, a gold fish swam up from the darkness, like a ray of sunshine. He wriggled up to nose my water bottle and I immediately felt happy. But I could not help but think that rather than having glass walls or a bowl to look out of this particular gold fish, in the middle of no where, could only see up into the sky. How did the gold fish get there? What was its life like? What did it see inside the cistern? I believed what the gold fish saw just wasn't black.

I climbed down from the ladder and got a move on; big, black clouds were rolling in. Not more than 50ft from the cistern I found a Somalian nickel. An elephant was etched on one of the shiny silver sides of the coin. I pondered in a baffling manner, I wondered deeply at the travel and story of that coin from so far away a place to another so far away a place. The world suddenly appeared enormously grand around me rather than being a gold fish in a fish bowl, or cistern.

These 2 moments, counter-intuitive to one another, conflicting in nature, one narrowing the world, the other expanding it, has left a great impact on me. Fleeting as they were, I felt a tremendous amount of hope as I hiked towards the Rio Grande River. I couldn't help but remain curious to the meaning of these conflicting, profound findings. I felt free, very free, yet occupied with an exploratory urge.

I crossed the muddy river and entered the bosque. Bugs zoomed around me and I hurriedly walked on. I camped underneath the overpass of I25. My sleep went from restless to restful as I got more comfortable under the highway as the night went on.

I awoke early the next morning and walked into San Lorenzo Canyon. It narrowed and the pink walls shot up tall. I climbed up a small, polished chute made slippery with spring water. I swiftly hiked the rest of the day trying to out-hike the incoming thunderheads. The land flattened and curtains of rain blocked my view of the north. For some reason, I fortunately avoided the heavy rain as I walked along the edge of the darkness. To the south, more dark clouds hovered over the Magdalena Mountains. I walked within a pocket of sunshine. 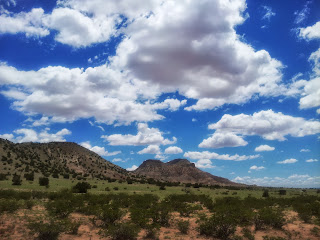 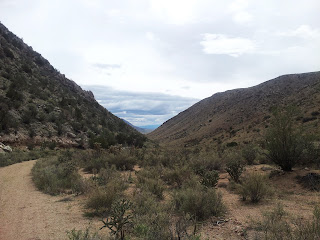 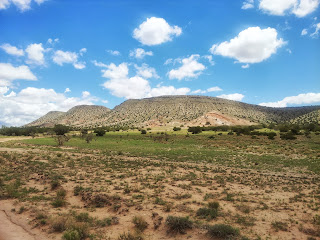 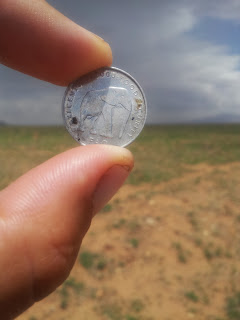 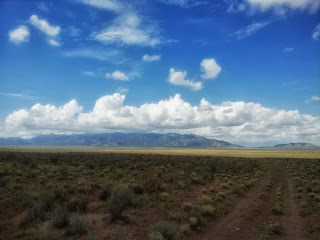 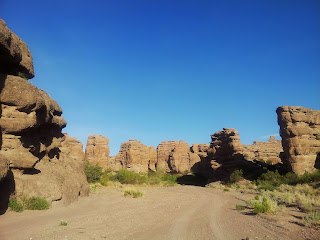 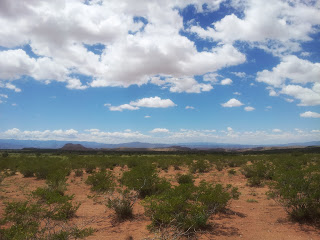 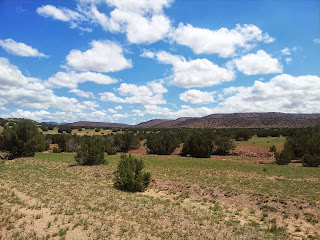 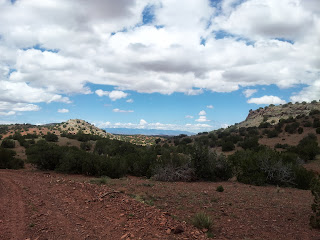 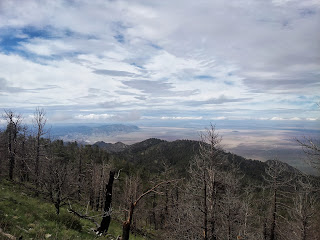 Posted by dirtmonger at 8:37 PM