Day 6:
Mileage is important to me. With mileage I smile, I feel that I have travelled, that I have been in sync with the movement of the world, the universe, the flow. I am seriously not trying to be cheesy here. However, what is not important to me is time. Maybe part of what I strive for with long distance hiking is to be living in the moment at a constant clip. Life seems to be always on the precipice of ending which makes it that more valuable. Distances ahead show me what moments lie away from my instantaeuos liveable moment. The urge to get to these distances is so great and compulsive yet if I couldn't walk another step and I evaporated into thin air I would be fine with that. Maybe that is what I want, maybe that is why I walk all day, to experience all that I can with each step, to put utter exertion into the life I want to live, until I expend and die out. And with steps the mileage adds up, in turn, with each step I forget about time.

I preface this non-descriptive entry with some inner babble because this is the section I cannot explain, that I find hard to write about. Simply put, this day was one of the best days ever-----5 massive passes between 15500-17000ft, incredible views and scenery, so much hard work, pushing ourselves deep within, exerting a massive physical effort that uplifted our spirits.

•Pass 1: We left Sharktooth's place and ambled up a long valley. We waited for a shepherd coming up quickly behind us at a rocky fenceline where the opening of the fence of the grazing area narrowed to a foot path. He was old yet hiked like a young man. Friendly, he smiled with no teeth. We let him ahead and kept a reasonable pace behind him to not interrupt his way to his daily task. I am sure he was going to his herd of llamas. On the top of a massive headwall we found a beautiful alpine lake nestled in a narrow part of the drainage with a serrated ridge above. At the pass, swirls of chocolate talus and caramel scree blended into the moonscape as if a giant chocolatier whipped up a confectionary concoction, or a barista swirled together chocolate and caramel on top of some type of mocha. (Clearly, I just drink regular coffee.) We gazed all around us in awe. To the south a stunning view of Huayna Potosi poking its nose over the 16,000ft chocolate ridge. After a few minutes lingering about this pass we had a fun descent into an enormous basin shrouded by massive peaks looming above. From the pass a sliver of trail could be seen weaving its way through the basin, as well as the next pass we were shooting for.

•Pass 2: Through the basin we followed well-travelled tread good enough to make me think that this is a popular thorofare for shepherds or guided trekkers connecting between base camps of popular alpine and glaciated peaks. A steep climb occurred. Huge glaciers appeared as we trekked among the chocolate colored rock and dirt. At the top notch it was windy and chilly which meant we didn't linger nearly as long as the previous pass. Maybe a reason for that besides the elements up there was that a charcoal colored volcanic scree descent laid in front of us. This meant fun and we jumped off the pass with excitement. Along the way down, with the charcoal scree transitioning to the tussocks of alpine grass, we met another shepherd. This time a young man. We found him relaxing in the tall grass gazing up at the massive skyline. He seemed to be relishing the sunny slopes, the incredible view. He seemed to be in a certain type of meditation with a look of deep love for the mountains. He was of the mountains, period. His task was to tend to the llamas grazing below and he took advantage of his post by merely chilling on the amazing hillside looking up at the massive blocked peaks. I could tell time was irrevelant to him other than in the form of the sun moving across the blue sky. His hiking boots had holes in the front, his big toe wriggling occasionally, his gummy smile wide, his skin dark; his demeanor signified he knew the area, understood the mountains. What a life he led. We let him be and aimed for a climber's refugio in the valley deep below. All I could think about was my next life. I wanted to be that shepherd in the Andes, the Cordillera Real.

•Pass 3: Steep! I'm tempted to leave it at that, but I would be remiss to mention about the pretty llamas, the weaving trail winding its way up glacial moraines and steeply carved drainages, the massive shelf hanging above a deeply cut valley, and the zig-zagging and beautiful path climbing steeply through gully filled with loose rock. From a distance, this pass was very difficult to discern, like what it would look like from the top, or if there would be snowfields or a glacier choking the way forward. Neither was the case. Just cold and windy. We took cover behind an outcrop of boulders that shielded us from the icy wind and kept us warm. The incredible views of peaks and glaciers gave way to a precipitous descent that plunged thousands of feet through cascading scree and slabs of rock, ledges that fell off into a glaciated abyss, a turquoise lake absorbing the echoes of our grunts, of our watching-steps. Looking back from a precipice up the carved glaciated channel, one of the biggest and most imposing glaciers I have ever seen dominated the valley. The sharp peaks looked somewhat small atop this massive ice flow. The beautiful lake situated below...so blue, the bluest of blues. After a mix of route finding following some cairns and some scrambling along rock ledges, we descended to another lake, the highlight down being the hogback which we tip-toed down.

•Pass 4: From the luminescent lake, the radiant azure shining against the backdrop of the Altiplano in the distance to the west, we trekked around a massive ridge line that topped out at 16000ft and crossed over into another valley. The striations in the dirt, almost zebra-like rock lines of scree, metallic and charcoaled, led us the way and in a way that fascinated me. I was reminded of the coloring of the San Juans above timberline, simply mesmerized by the various hues. We trudged through sand, clumpy and in-between tiny pebbles and flakes resembled pumpkin seeds. Another moonscape.

•Pass 5: We traversed another huge valley with steep walls jutting straight up. Punching our way through soft ashy sand the ascent evoked scenes of Muir Pass but WAY bigger. We navigated along a crumbly path, constantly climbing, indulging in a spring spouting up from the ground, passing peaceful glacial tarns, continuing up and ever up through boulder-strewn corridors until finally making the pass to be awarded with an instantaneous alpenglow. Fuck, the end of the day, the most amazing day, we marvelled at the scene around us, a profound high altitude silence, a solemnity of solitude amongst the rock and scree, the puffy clouds and thin air, the mild wind whistling, and the mountain cold settling in for the night, heavy on the being. We hurried down from the pass after lingering a tad too long. We bounded through boggy streams until finding a wonderful campsite at 15000ft.

Day 7:
Swami and I woke up a little sluggish in the morning after the monster day the day before. I think we also felt after the effort the previous day we could afford to take little extra time that morning pfaffing about. Of course, it didn't take us long to kick it in gear. Off we went and eventually rounded a high ridge that gave us views of Lake Titicaca. Around a shoulder we set our sights on a beautiful valley filled with two huge beryl-colored lakes. Another steep drainage up a talus slope, piles of cinder flakes oozing down from the top and we hit a gap over 16000ft with splendid views. A fun descent along cruisy trail ensued. W decided to stay a bit higher on the descent rather than get to the drainage floor. A path of least resistance at first that ultimately turned into a harder conundrum in which we had to choose amongst four options of gaps spanning a huge ridge. Either gap, the way up each had crazy scree slopes at 60 degree angles or more. Amid our problem solving we couldn't help but gaze up valley at the amazing glacier seeping and clinging to a headwall. Referring to the map, we really couldn't concretely decide which gap was the least challenging,, or the easiest. The landscape is so enormous it was hard to tell how steep a hillside is or where a trail may lgically go along the contours within the landscape. To further hamper our decision-making, the llama pathways that lined the talus slopes blurred our vision of gradation and gave us hopes that a particular way may be a good way when in fact only provided us with more work. Pushing our way up two feet, then sliding down a foot in the loose talus kept us using every ounce of energy possible. In the end, we chose the most entertaining pass and not necessarily the easiest. I mean, besides the fact that Swami and I relish this type of hard work and exhaustive hiking, but from the pass you could see an amazing chocolate milk colored lake and huge, menacing peaks. We decided to shoe-ski down a steep scree slope about 2000ft. So incredibly fun, I couldn't help but think of us as big kids. Typical of our meanderings and navigations from the cresting of high passes Swami would lead the charge downhill, no trail, shredding the talus-gnar, shoe-skiing and scraping his way down to another glaciated valley backdropped by enormous serrated and glacier clad peaks. Nevertheless, this particular pass may have been the most entertaining.

We wrapped up the day cruising along a trail in a very long valley. As dusk began to blanket the pampa, cold sunk. We hopscotched from platform to frozen platform that crunched under our steps. The spiky grass crystallizing in the frigid evening. We found hard-packed sand, bare and dry, a fossil of a pond that became our campsite. I soaked my feet in an icy milky river before it got too cold. Swami stayed out of his tarp longer than me and hollered at me to look at the night sky. The night was thick with stars, the ambient light non-existent, so pitch black that I could fathom my hand a few feet in front of me. Luckily enough, the stars of the milky way provided enough glow to gather the shape of my hand in my mind's eye. The night sky resembled the white, chunky spackle of a ceiling inside of most apartments I have lived in. I only wish the stars would fall down as flaky as a ceiling. 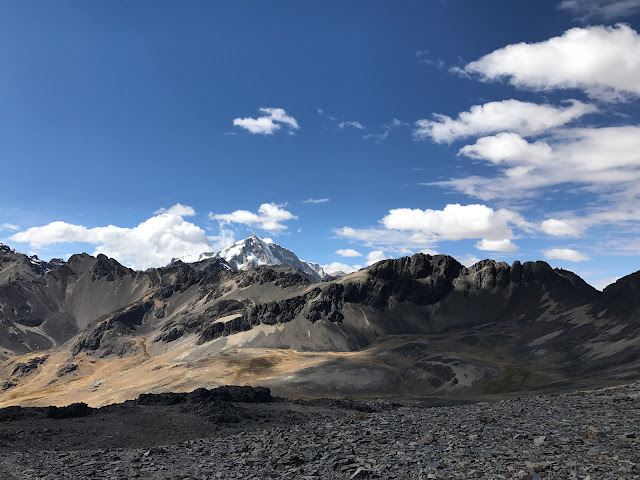 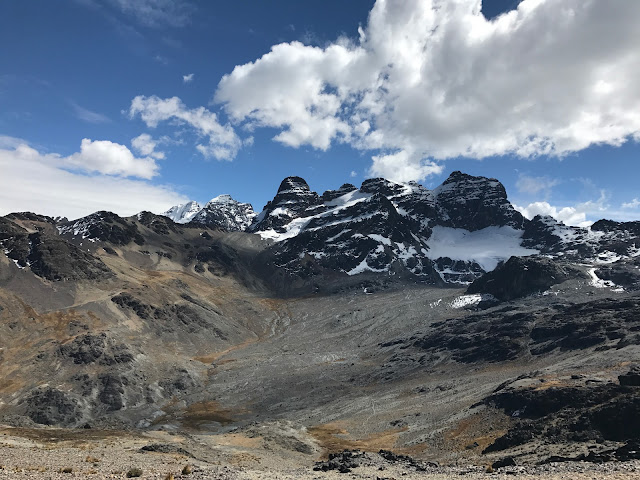 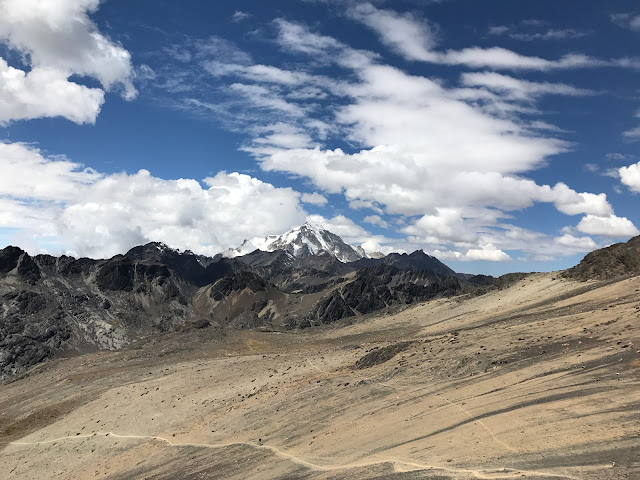 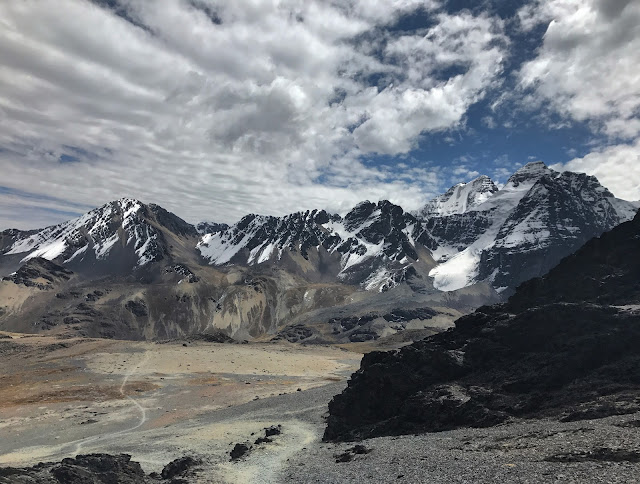 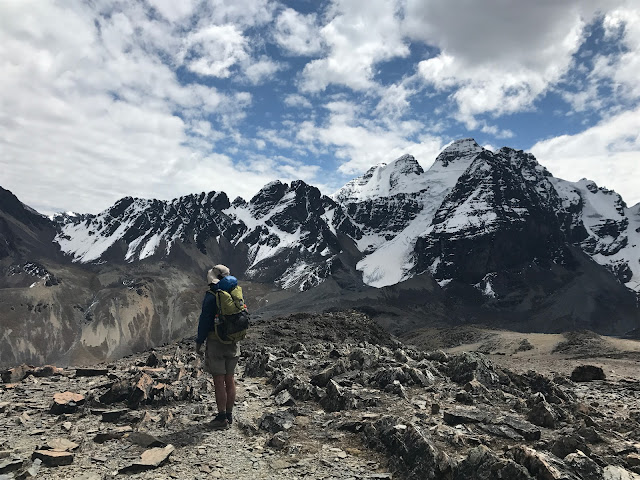 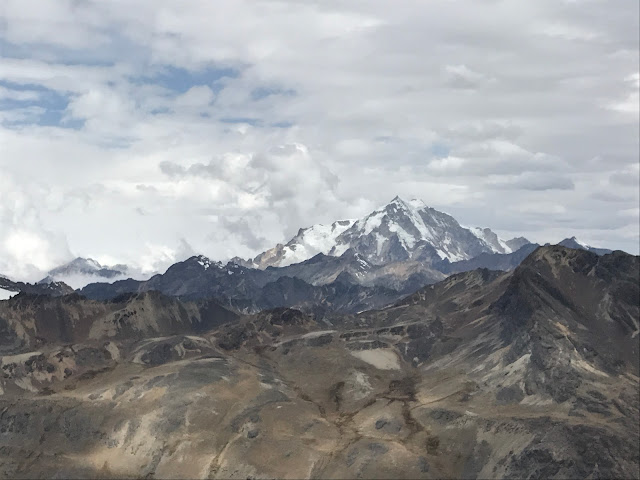 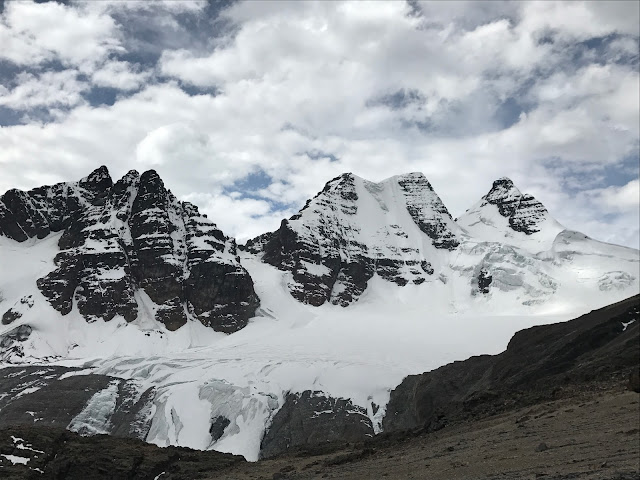 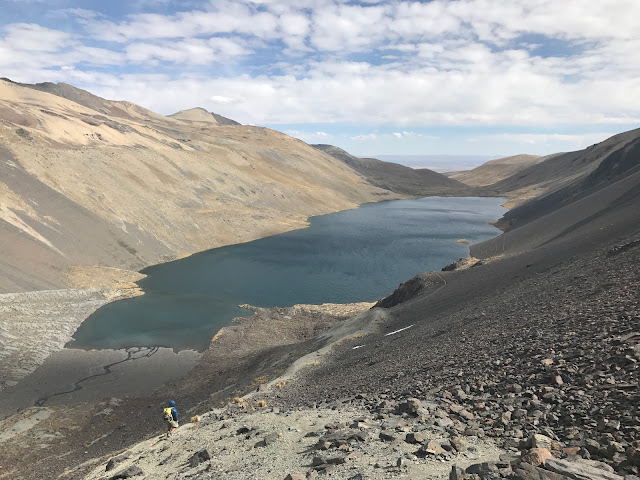 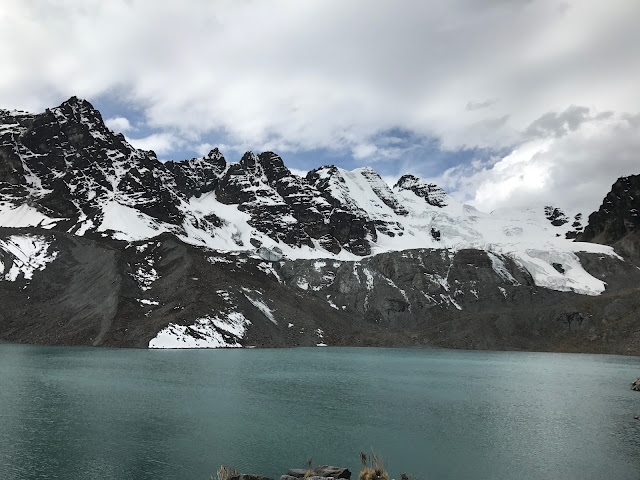 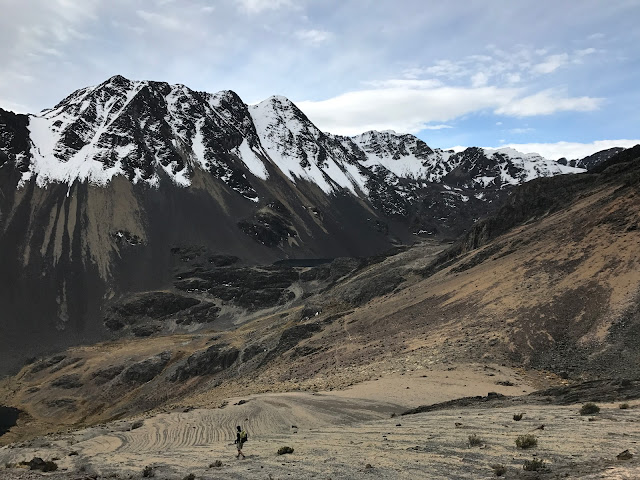 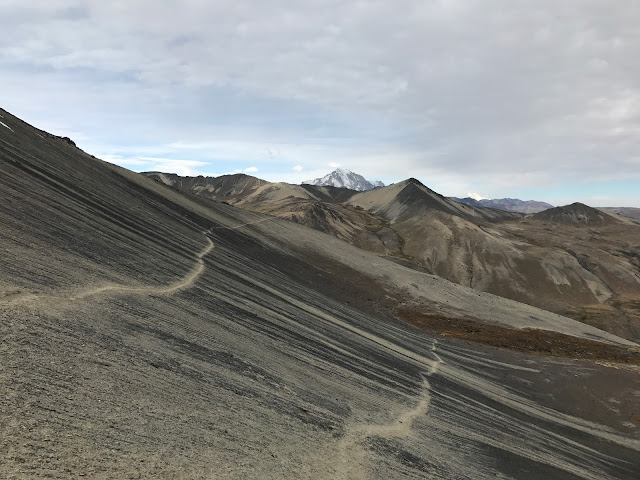 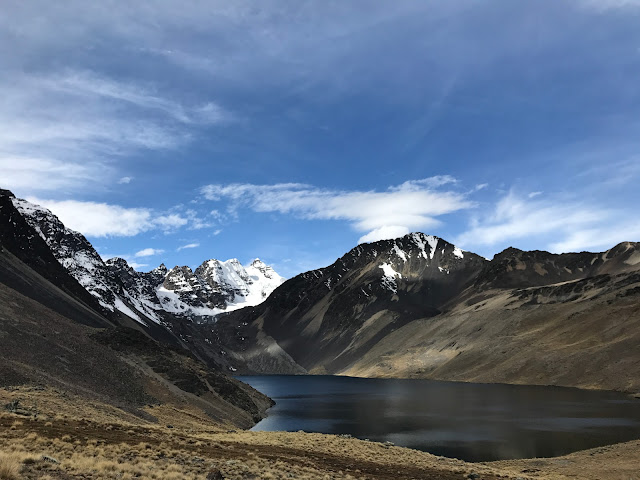 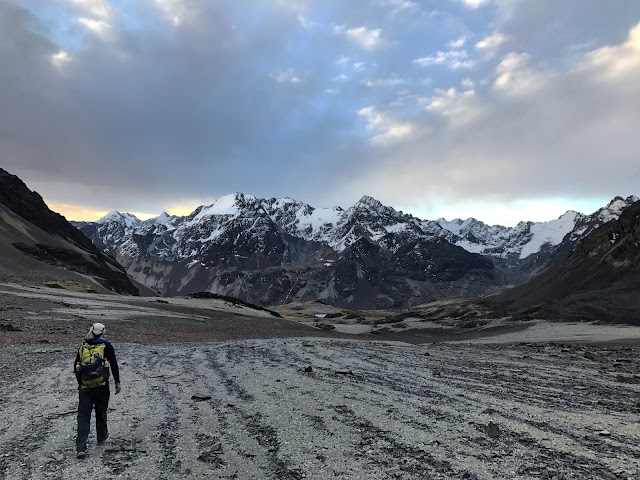 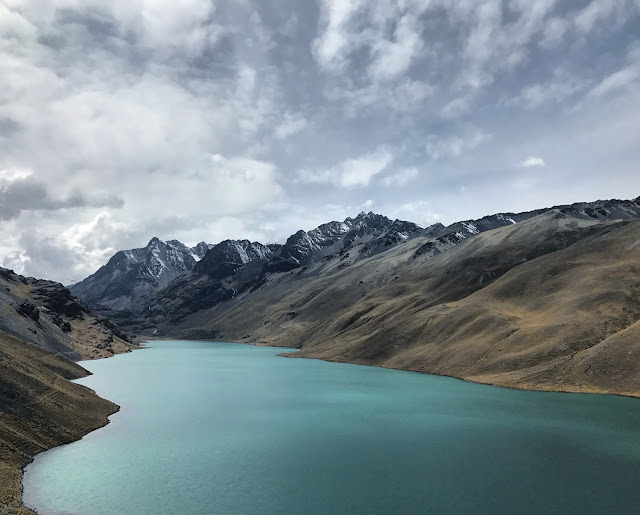 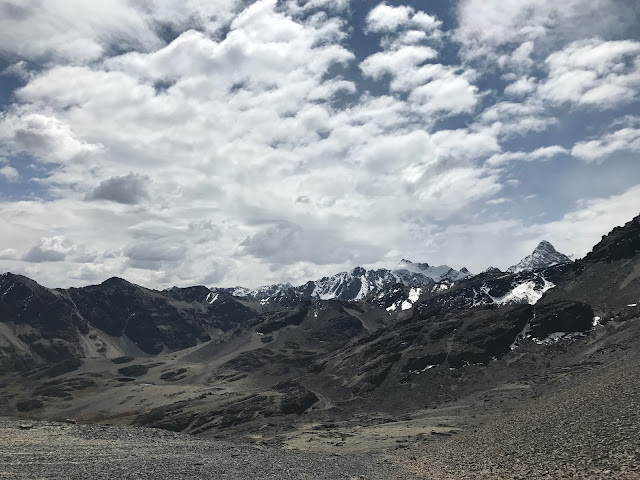 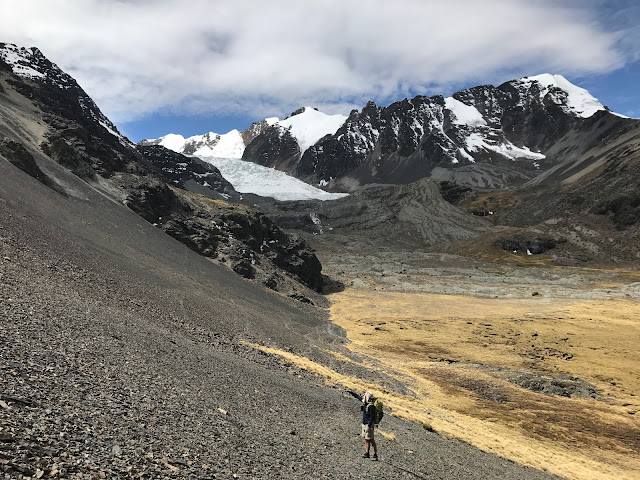 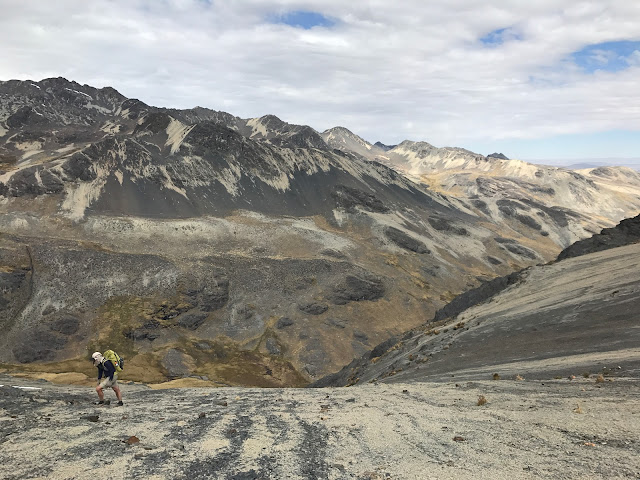 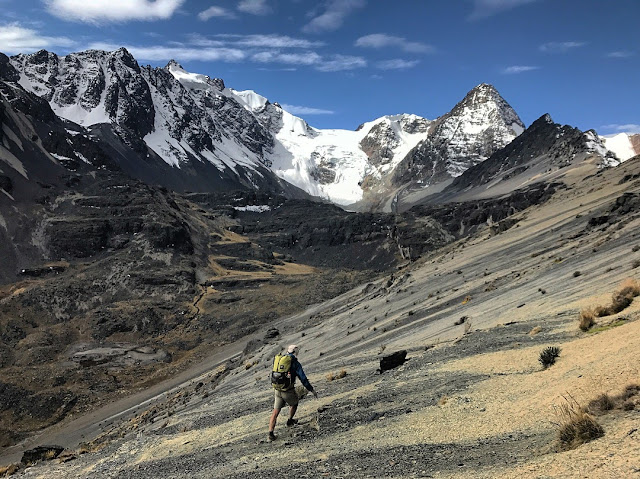 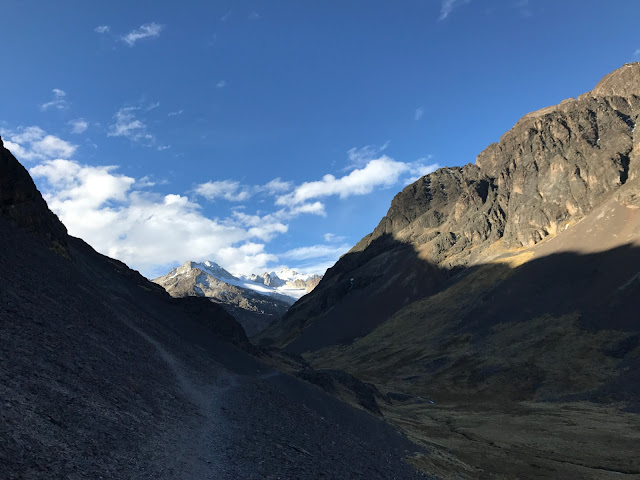 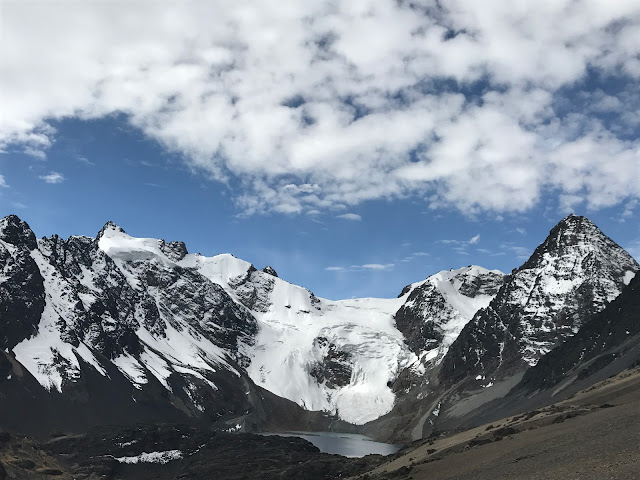 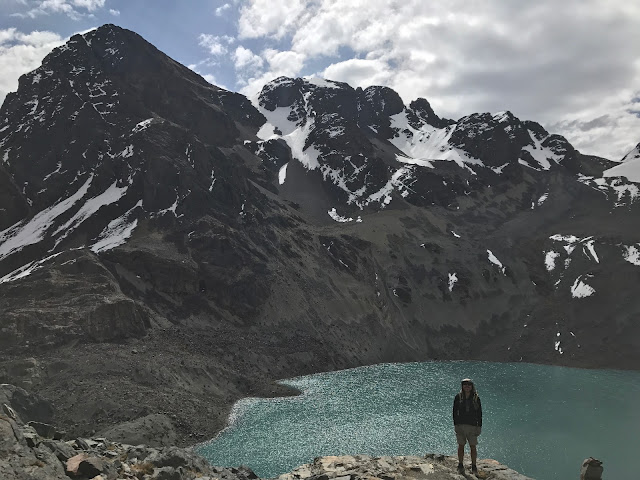 Posted by dirtmonger at 8:32 PM