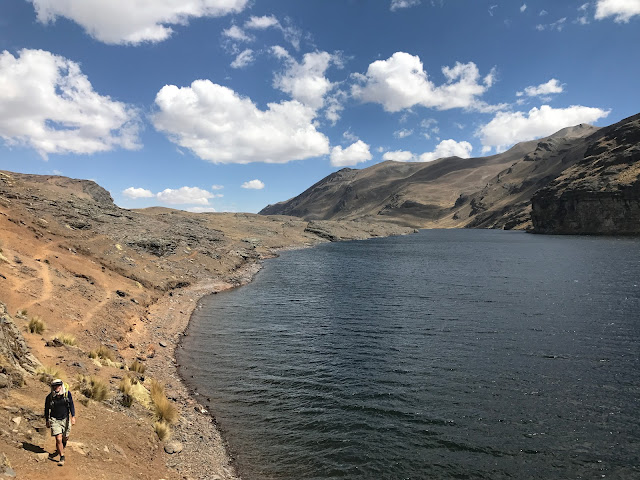 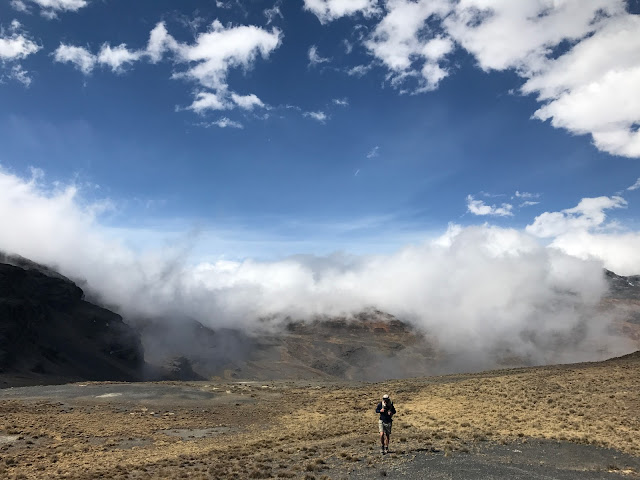 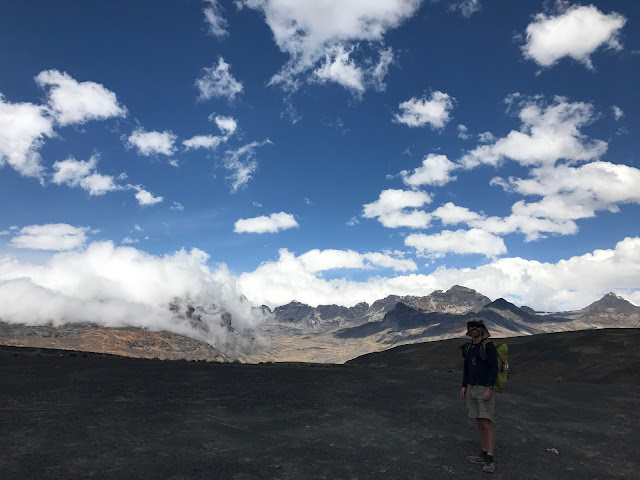 Day 4:
We took a taxi back up to Palkoma. In the dusty village all seemed quiet. We were back in the mountains although I couldn’t help but look for Chester. Every little mutt running around reminded me of him. As we started back on our trek trudging up a long dirt road headed ever upward into a massive range, I felt dwarfed under a barren sense of diminution, like I didn’t matter. I gazed back down towards the village, no sign of him.

The ribbon of the road went up the Rio Irpavi drainage passing 3 dams. Each lake behind the dam had that typical alpine blue characteristic of high altitude environments. The valley openbed up to incredible views with shepherd huts and llamas scattered about the terrain. passing through multiple pampas we finally attained a pass. The climb had been a gradual, pleasant trek, albeit the pass finally topped out at over 15,400ft. The landscape is deceptive in some respects, and not like the range is bigger than what it seems. It;s just that the illusion of something so menacing can be quite pleasant with the right weather, the right type of terrain, and the right company. Atop the pass, we actaully had to follow a ridge line to the actual proper top, an amazing moonscape of a mesa. Incredible broad ridges, smoky grays and reds, dusty browns and yellows, the wind-shaped and strewn-about talus all blended into the moonscape creating a magnificent pallete with ochre and earthy tones. We marvelled at vistas of massive mountains, all around us the panorama dazzled, the abrupt peaks jutting up from a hidden, deep valley below. The shadowy clouds with a bright halo silhouetting outer edge of the fast moving clouds swallowed up the sunlight directly ahead of us. We lingered up there, mingled around a bit in mountain glee; this was a hard place to leave. 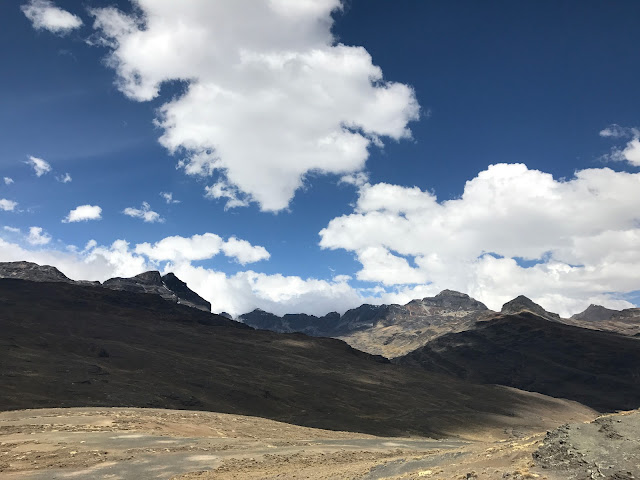 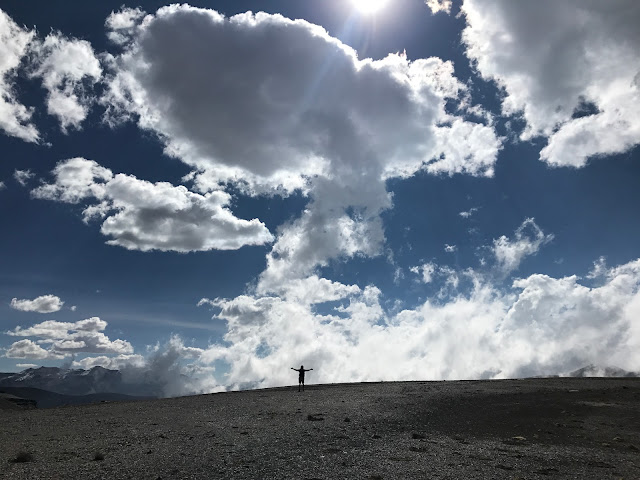 We had a fun descent down volcanic scree into the next drainage, simply shooting a bearing and following the line of sight with the path of least resistance. We, then traversed alpine slopes to La Cumbre, a popular pass for mountain bike tourists and locals travelling from the Altiplano over the Cordillera Real and down to the Bolivian yungas thousands of feet below. La Cumbre was a sight indeed. Abuzz with vibrant life, we met a rotund Quechuan lady who invited us into her tiny hut for rice soup. We then sat on a rustic bench watching locals praise a giant Jesus overlooking the enormous chasm below while others burned pyres or ceremonial incensed fires as the thick smoke swirled around the pass intermingling with the misty clouds. Separated from the more 'religious' sort a group of men drank alcohol and played music, their lamentations ululating in the alpine air. I could feel how special cool this place was.

We left La Cumbre to ascend the next high pass, Apacheta Chucura, just under 16000ft or 4872m. We had a kick in our step, even though the haze of La Cumbre stuck with me. I felt a bit uplifted. From Chucura we were afforded spectacular views of the Rio Chucura valley, a steep abyss of colorful walls and rocks with enormous peaks jutting up through the clouds. This pass also represented the beginning of the Camino El Choro that plunges thousands of feet to the yungas. The scene in front of us might have been the highlight of the whole traverse. If not, this moment certainly provided me with the most spiritual one, one that I will never forget. And, most of the time I cannot forget. So much so, I can't escape the images of my two year old mind recalling vivid detail of my first memory. This power of recollection and observation is something I cannot escape, even if it is what it was then; I just cannot forget. And so it is with scenes in hiking. I can tell you every campsite, every shitting-spot, you catch my drift...or sniff. Hitting Apacheta Chucura I could smell the damp air, the brittle wind chapping my nose, never mind the cathole I had just dug on the way up. But, these clouds, damp and heavy, thick like loomed sheep's wool, I could not help but imagine the knobby, dark knuckles of the old woman at Abra La Cumbre who invited us into her hut for a bowl of rice soup. Her hands pushing through a white veil resembled these exact knobby peaks sprouting through the thick clouds, so chafed the knuckles looked scabby, and like how the mountains looked craggy the wear of time had the imprint of immeasurability on both. Inside the hut, my knees hit the underside of the table. I sat next to an old man, his left hand trembling a tin cup, his right quivering a hanging ash on a frail cigarette. I took a deep, humid breath and merely wondered at how all matter is woven, loomed like thick sheep's wool reaching from the sky to the peaks to the yungas, to the people. And then I saw this scene from Apacheta Chucura, which I cannot forget. 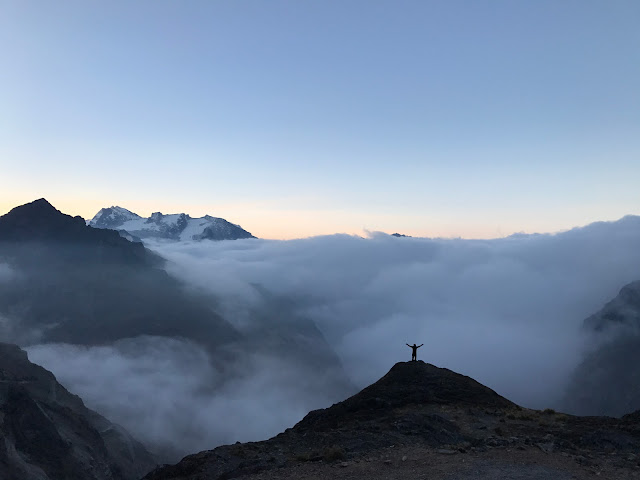 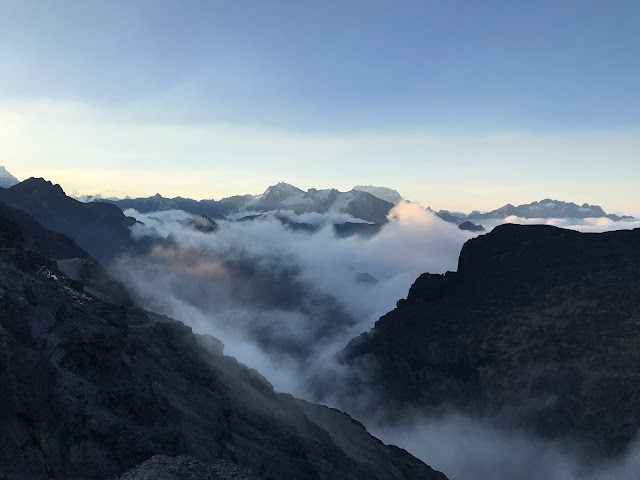 Day 5:
After the amazing amble down the Choro Trail the evening before, we awoke in an enormous valley. Up early, we headed down the Incan cobblestone path to Chucura passing ancient huts before taking a steep side trail up that went over a ridge into the adjacent drainage of Rio Phajchiri. In La Paz we had decided to take Camino Uma Palka instead of original scouted route on GoogleMaps by Swami. On the bigger, paper map we found in La Paz this seemed like a more attainable option to get through to the road near Estancia Botijlaca. After traversing along an old path we finally hit the pampas below. Things had been going a bit slower than we had expected, so after a powwow we decided to ditch the route to Uma Palka and head up the drainage to connect with the original route. I believe either way would have been hard work with a ton of route finding, but in the end, this certainly had been the right choice. In creating a route, value and creativity should be placed over ease and comfort, most of the time. And this was one of those times. We came to a high plateau flooded with stellar scenery that included the massifs of Cerro Tilata, Cerro Wayata and Cerro Charkini. Clouds, mist, and fog loomed over most of the day, although the elements did not take away the beauty, rather the gossamer wisps enhanced the surrounding walls and peaks. We hit a plateau before a notch. Views back down the wide plateau became swallowed up by the oozing clouds. A cold wind whipped up from the other side as even more clouds swarmed up the steep, loose gully and adjacent mountainside. We had a sense of confusion because of the cloud-blindind, so we decided scramble up a rocky ridge line to another notch, which we then scrambled down a precarious icy, muddy, and rocky gully only to scramble back up very steeply among a boulderfield to attain another pass that overlooked Huayna Potosi. Ecstatic after the challenges, we  earned this pass. With a long rest up there, the sky finally opened up to stunning views oh Huayna Potosi and an incredible heart shaped lake. This was one pass Swami and I gave an enthusiastic nod and handshake, a smile or two, nice and wide, shown on our faces. Another moment well-earned. 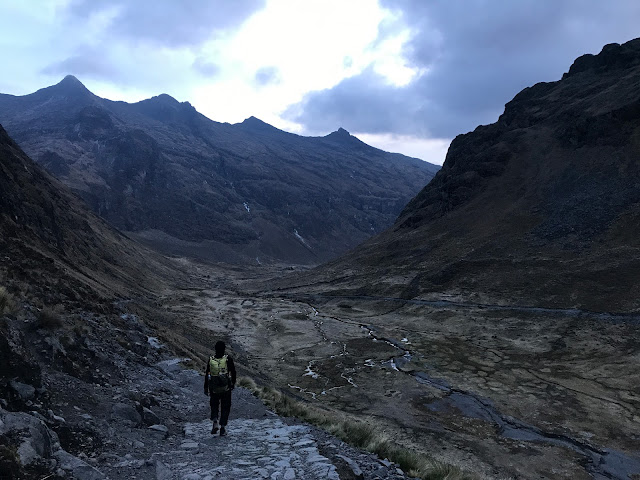 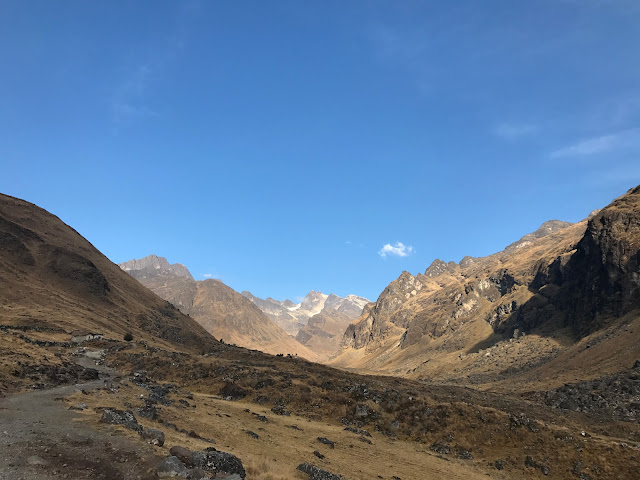 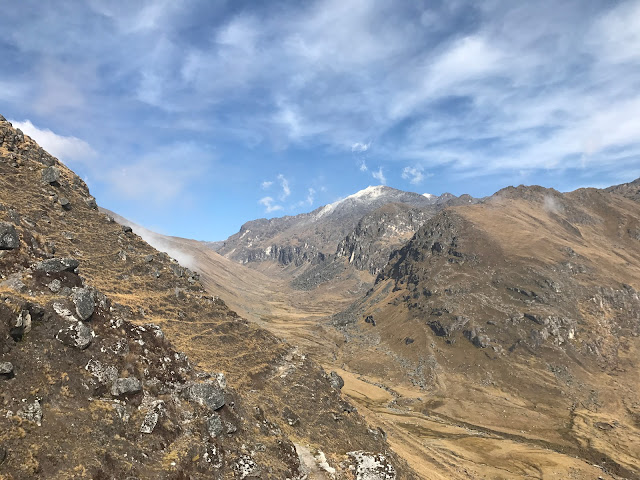 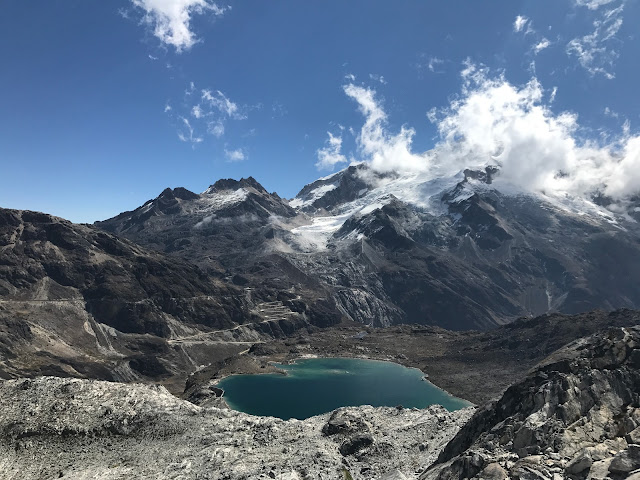 A long walk down an isolated road ensued for about 8m to Estancia Botijlaca. Shrouded in clouds, fog, and a blowing cold mist, we put on all our layers to retain our warmth. Temperatures really plummeted due to a really cold headwind. Head down, we trudged on passed the Estancia to a hydroelectric plant near the village. We asked some locals there for a place to stay, a shelter above our heads to say the least, for going beneath the cloud layer and touching the upper portion of the yungas the air became super thick with a sticky wetness. We were told to talk to the gentleman who watched the hydroeletric plant overnight. We found him and we stayed in a room that the caretaker had extra in his home away from home. Sharktooth, as this man was to be remembered by because of an incredibly large tooth jutting into his upper lip, described his duties to us, showed us his thermal suit, and gave us a couple pieces of bread. We call him Sharktooth in jest, mainly because of how much he tried to swindle us out of extra money the next morning. Nah, who am I kidding...the large, grotesque tooth was the real reason. Either way, we were so grateful for his hospitality and truly enjoyed his company. 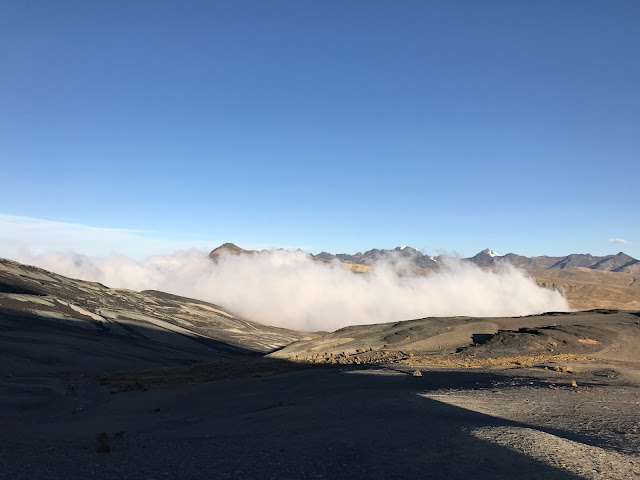 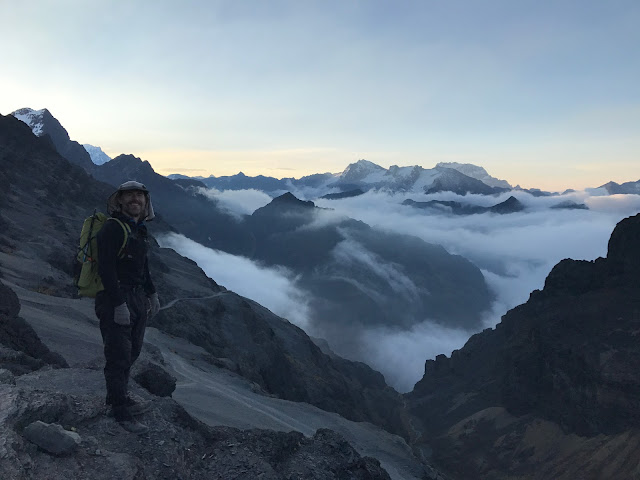 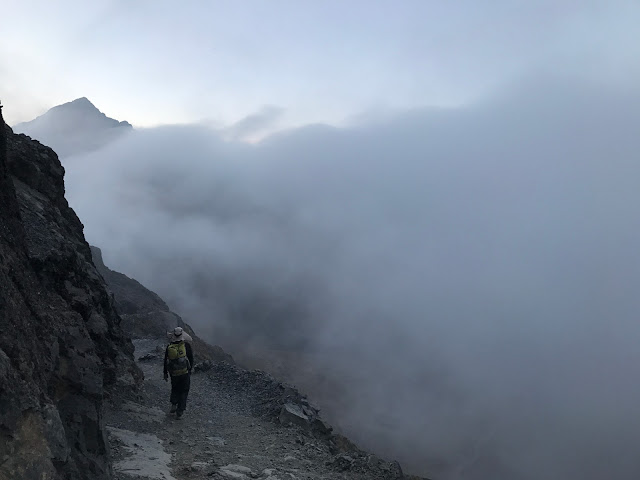 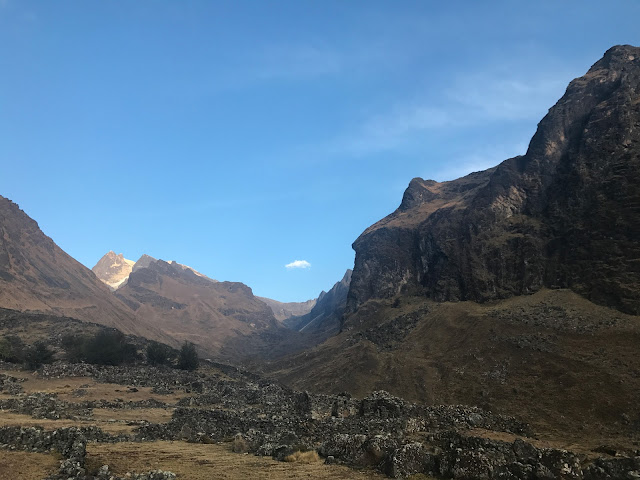 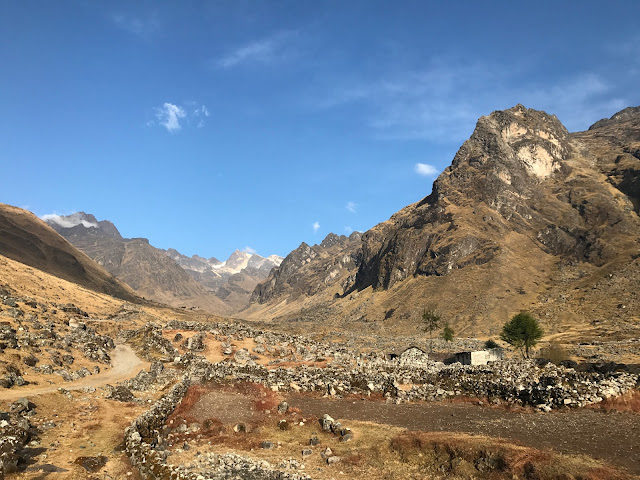 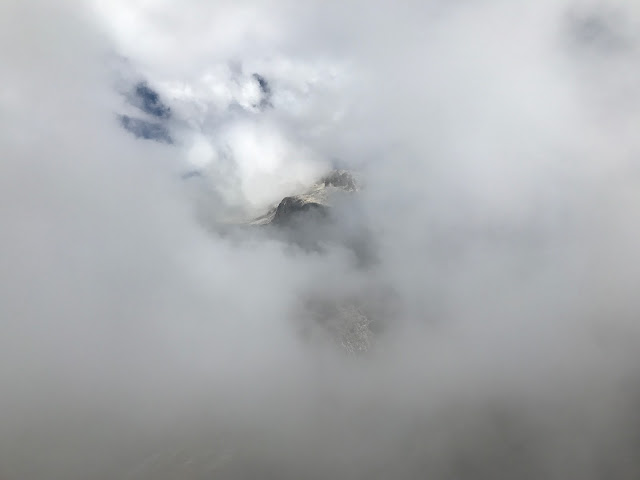 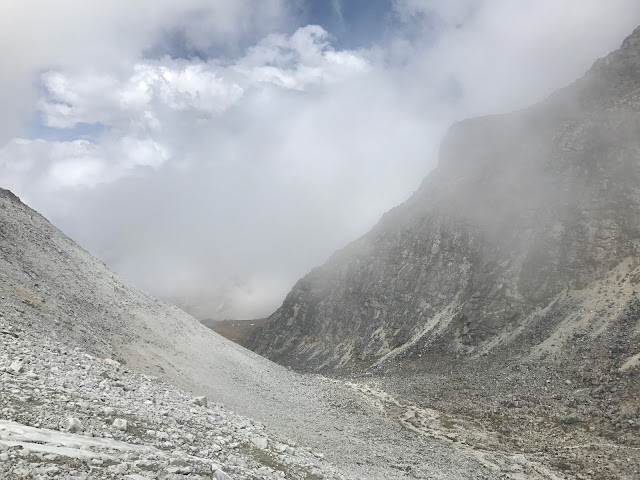 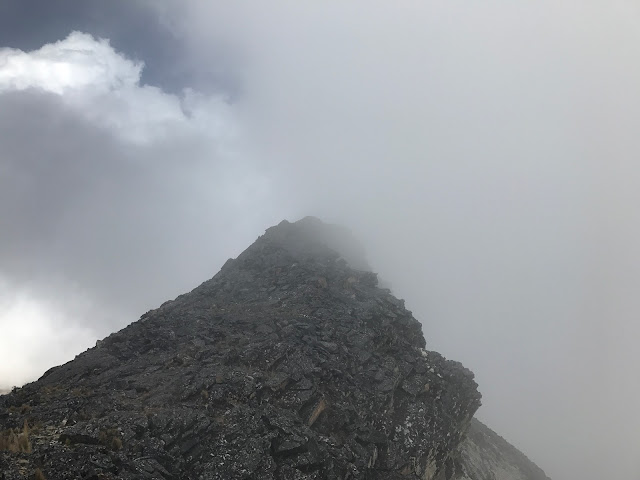 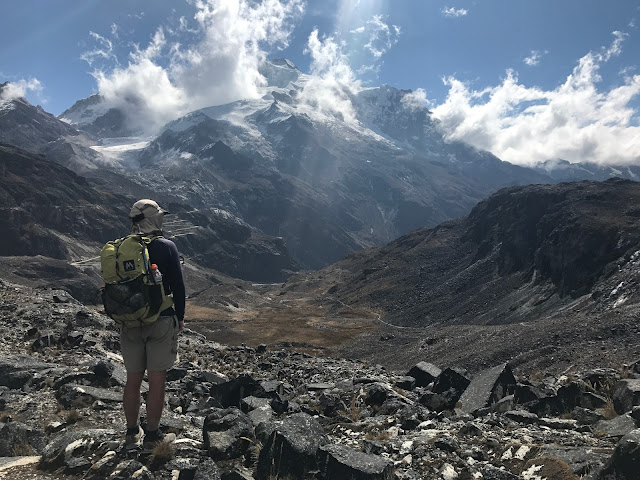 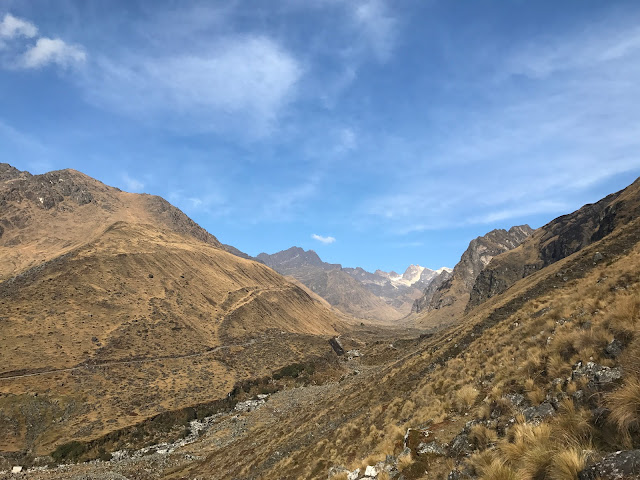