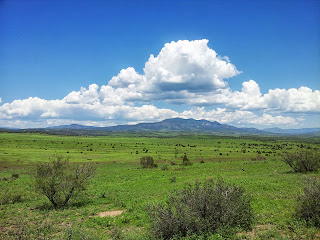 I was so excited for the town of Glenwood I hardly slept the night before. I was up at 5am and wondered into town for breakfast and some scrumptious homemade green chile and cheese biscuits. I found a motel room in the small town and loafed around all day.

The night came and I found 2 scorpions crawling around my bed. Needless to say, I hardly slept that night too. I kept the light on and slept on top of the sheets, waking up every half an hour or so, if I was lucky to fall back asleep, and check for other scorpions.

The next day started off smoothly. A pleasant walk under bright blue skies on Sunflower Mesa ensued. Up into the rugged range of the Blue Mountains. I crossed back over into Arizona and within a quarter mile a lime green rattler lay coiled and noise-making on the side of the trail. A fair warning indeed. 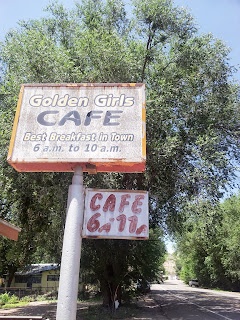 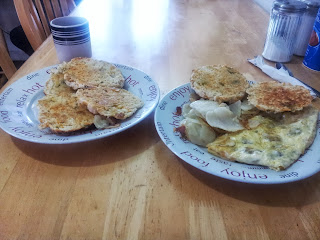 The trail petered out under the braids of cattle trail and the overgrowth of gambel oak and some other kind of thorny brush. Bushwhacked and flustered I laboriously worked under the hot sun. My legs became shredded with cuts and scrapes, the salt from the sweat stinging. I kept at it and moved along the crest trail until the descent down Wild Bunch Canyon. The canyon suited its name with jumbled rock for trail and poky and prickly plant life. The area was wild and ornery, only a rough and rowdy crew could inhibit such volatile environs. I saw several tarantulas crawling in hunt. The cattle were emaciated and bones jutted from their skeletal frame, especially their rumps and giant heads which only bulged out their large eyes through bony eye sockets. Fire ants marched in a furious line or swarm attacking anything moving. Everything looked like death was imminent. Even the sunrise showed anger in a blazing color of orange and red perforated against the foreground of a thick, blanketed wet wall falling from black clouds. I imagined a ripe peach's skin, that was the only way to put quiet, soothing thoughts in my head, for the fiery sunrise veradically evoked angst and contempt of the world around me. I impatiently walked under the veil of night and found camp on a barren patch of red rocky ground near a thorny mesquite.

The insects came: mosquitoes and no-see-ums. They invaded my tarp that night and for the third night in a row I hardly slept. 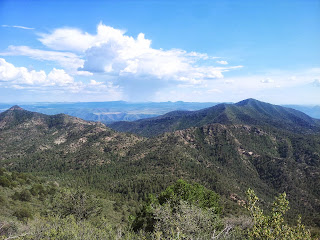 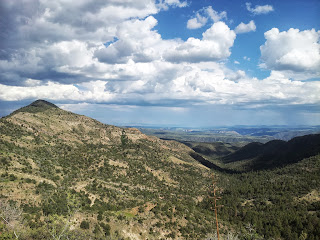 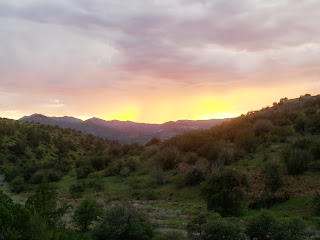 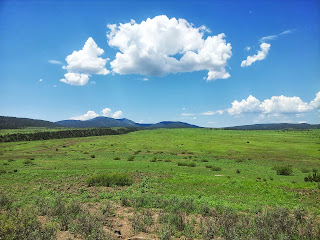 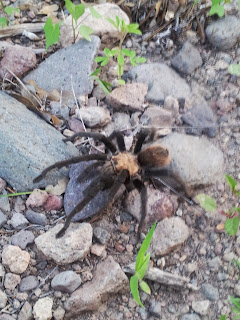 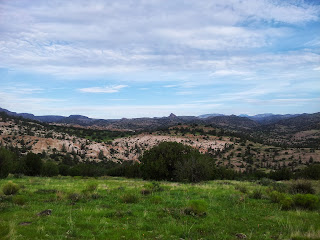 I awoke even earlier with a foggy head. I sluggishly hiked through even more rugged terrain, the rocks rolled under my foot and I slid under dodgy balance. The area was ruggedly handsome and isolated. It seemed to be a place where ill-doers were banished to. My days lingered on but I kept moving. If I stopped for too long the no-see-ums swarmed around my ankles. My ankles became knobby with bites and I fought the compulsion to scratch.


I made a poor decision in skipping Eagle Creek. Mentally I was bushed and needed something easy to do. I walked passed Morenci Mine, a ginormous engineering feat of modern man. A strange sight to behold after hiking in places where I have seen ancient relics of old mining activity. Rusted shovels and picks against the caverns of hand dug adits, to now witnessing a crater in the Earth plunging to depths beyond my vision with the tailings and dirt being moved by monster dump trucks and scooped out by giant cranes. 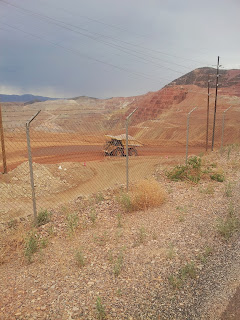 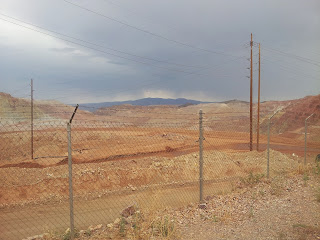 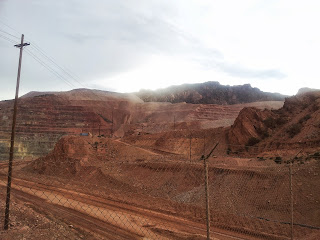 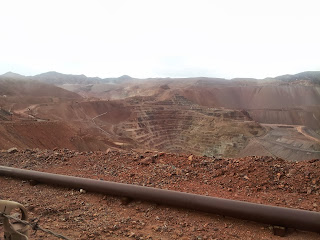 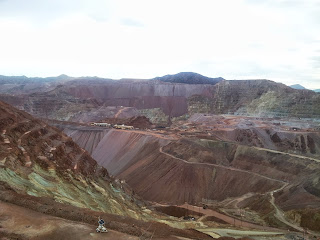 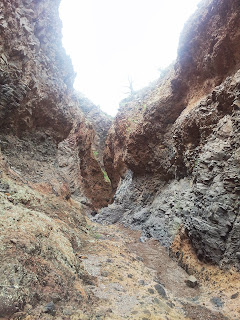 The land got even more barren and a stark nakedness of terrain tore into my soul. Time and place were changing and I needed to adapt. I felt low and disappointed and sludged through the hostile terrain. I wriggled up some beautiful slot canyons which showed some form of biota, especially Bonita Creek and its giant sycamores, willows, and cottonwoods. Up on the desert span greasewood, cactus, and ocotillo blended into the land. In the drainages life clung close together, while on the desert the life kept its distance from one another, as if showing an annoyance of life. I like this terrain, in fact more often than not, I find it beautiful and special. But I could not get over my mental exhaustion.

That night, 6m from Safford, I pitched my tarp under a big sky, clear of clouds. The drifting sun faded down in a vainglorious way, as if it brought life to all and it wanted to show the world how pretty it was. The desert neglects even the all mighty sun. The desert is a void and it sucks up even the sun, no matter how rosy its fingers may be. A mosquito hatch erupted into the humid air. Whizzing and whirring annoyingly attacked my senses. I could feel them on me. I swung my arms around in my tarp, I kicked in the air, all for naught at trying to swat any flying pest. I wrestled with them with a dead tired head. I hoofed out 33m that day but decided to run down a black desert highway 8m into Safford.

Something in my mood changed in that run. The mosquitoes still clung and dive-bombed me even as I ran. But I felt clean, refreshed. I managed to get a motel room and in the morning I slept in. I stayed in a cool room all day avoiding the oppressive heat trying to re-group.

The end is near but I've got to stay within this journey... 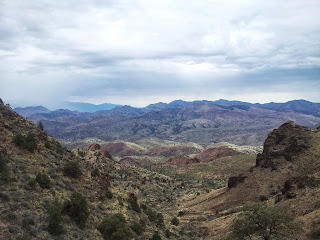 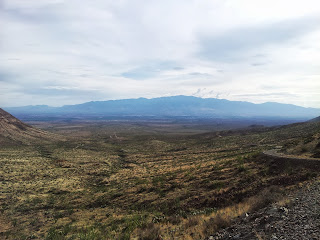 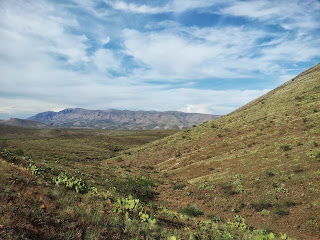 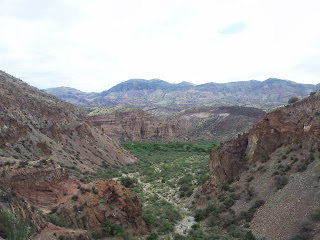 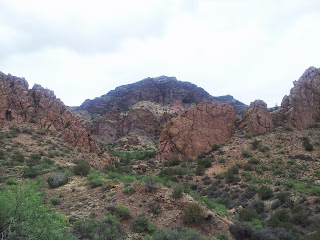 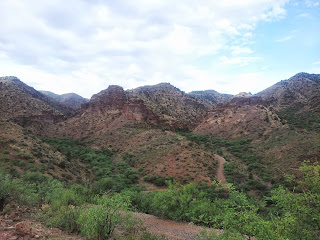 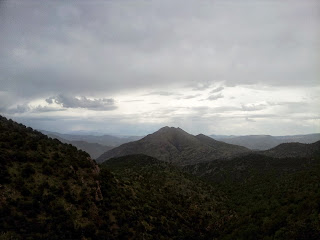 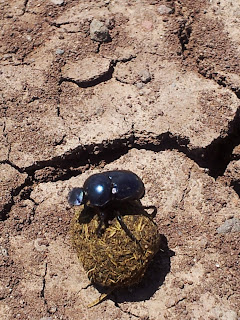 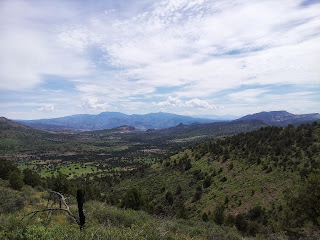 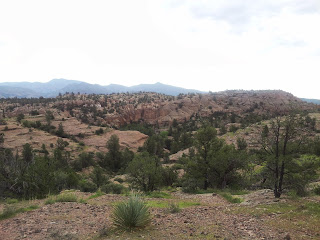 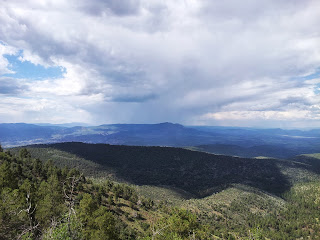 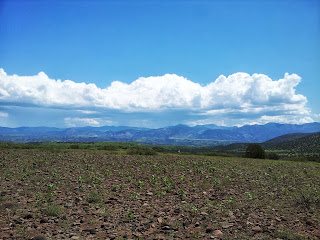 Posted by dirtmonger at 7:04 AM