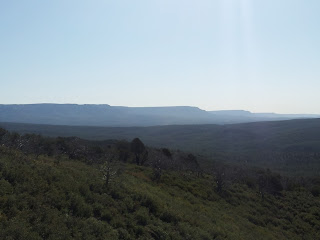 I left the cabin in Pine early in the morning. From the Pine trailhead I encountered the Highline Trail, my line of destination for the next 17m up to the Mogollon Rim. The Highline was used by early settlers to travel from settlements and villages to deliver goods and trade. Immediately, within the first mile, the sign of care and maintenance were evident in special consideration, a vast difference form the other side of the highway. Signs and trail markers were either tacked up against a tree or arrowed into the ground on a Carsonite post. The feeling of 'wild' left me and I felt a feeling of haste. 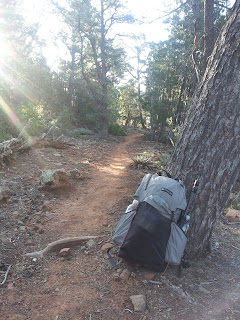 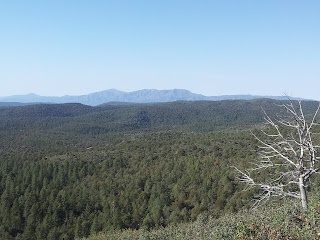 I walked under the rim that rose a 1,000ft above me. Sometimes the forest enveloped me and my views were stunted. Other times I was treated to elongated views of the rim that stretched for miles in the blue, hazy horizon.

A little bit after lunch I attained the top of the rim. A sense of giddiness overwhelmed me as the trail suddenly became easy to walk. In fact, I was whistling, and singing, and leaping. But the coma-zombie-walking soon became boring. My positivity went into a negative rut. The terrain was so easy I just wanted to get it over with. The tall, sturdy ponderosas stood individually strong all around. At first, I was ecstatic to among the really giant ones. Then my mood, and my drive, zeroed in on my next target: Flagstaff.

So, I mashed it, peeling off a 33m, 35, and 36m days. But on the last one at the end of the day, with a lot of to-dos on my mind for Flagstaff, I realized how foolish I had been acting, downright irresponsible. The third day I had been by-passing water sources that were a tad off trail. If the source wasn't on trail I wasn't going to it. I felt a tad arrogant and I began to chastise myself for being so hasty.

The last morning with about 6m to Flagstaff, after freezing my ass off again, I plodded along into Flagstaff. I thought long and hard about my last 3 days. Here's my assessment: I NEED TO CHILL!

Anyways, along this section I ran into again a mountain bike rider named Max. I was zombie walking the second evening when I heard him yell out my name. "Dirtmonger," echoed in the huge swale and meadow I was in. I turned back and shouted out in disbelief, "Max!?"

He was leading the Arizona Trail Mountain Bike Race. We chatted quickly and he rode strongly away. Maybe I'll see him again in Colorado as he bikes the Colorado Trail Race and I walk the CT. 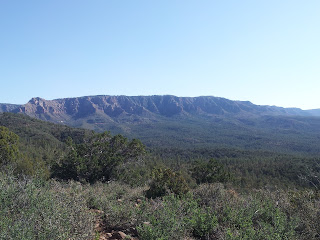 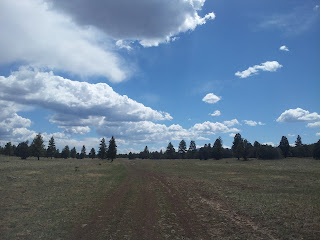 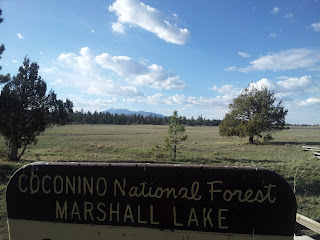 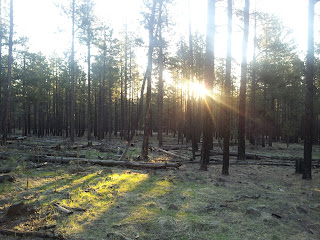