Sections 1 of the Great Basin Trail

Sections of the GBT: Section 1 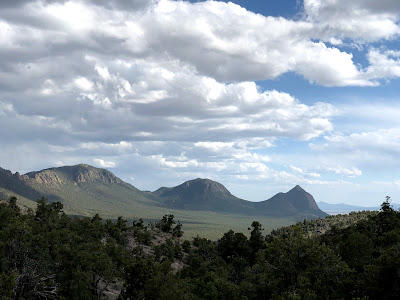 The Fortification Range is a low elevation mountain range eastern Nevada made mostly of volcanic rock. The highlights of the range include the wilderness area, which is close to 31,000 acres in size, the bulky, vertical ramparts at the heart of the range, and the system of wild horse trails that weave through the rocky terrain. This range is different than the usual Great Basin ranges dominated by limestone. The Fortification Range is made of a volcanic tuff that is pink, white, and orange in color and as you walk the Great Basin Trail you will find drastically different than any of the other ranges you will traverse through. 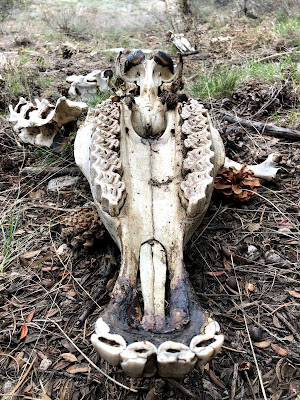 The Fortification Range surprised me probably more than any other range throughout the GBT. Not only was the range my first to hike through but the beginning of my thru-hike. After Ruta dropped me off I made my way unknowingly into the range, basically kind of freestyling and hoping that the cross country route I had planned would work. I found and explored a network of wild horse trails that otherwise made the inaccessible palisades pleasant to walk through and made progress through the range in an efficient and passable manner. Leaving lush area of Indian Springs I followed the contoured horse trails ascending above an angled cliff band. Red and orange boulders dotted the benches above the cliffs while in the background Wheeler Peak loomed across the wide basin of Spring Valley in a haze of gray clouds. The trails kept persisting beneath the craggy crest. After a pass I ambled down a hardscrabble descent pockmocked with boulders and tainted potholes.

The sign of wild horse is everywhere, not only in the trampling of a trail system to get through the range but the weaving way to watering holes, springs, potholes, or tiny streams. Under the vertical ramparts lining the walls ravens flew above and circled the pinnacles before swooping into the potholes gouged into the walls. At Fortification Spring water bubbled up from the ground into small pools. The water looked filled with horse piss and shit but one cannot be picky out here in remoteness. Horse bones littered the worn out area near the springs. The wind howled and the vast basin below me felt endless, even hollow, an illusory void of spookiness, like moans from the sun-bleached bones. 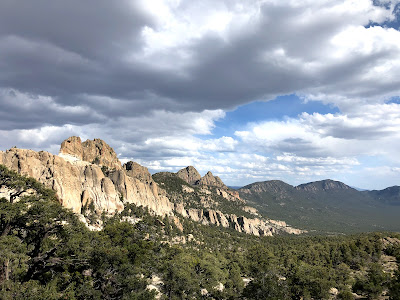 At Gouge Eye Spring a tiny chickadee alighted on the rusty pipe dripping spring water about a foot from my eyes. Out here in the Great Basin life lives on a thread and the wildlife shares the precious and scarce water. I am included in that wildlife to the chickadee, not so much to the wild horses who keep their wariness and trust at a distance. I crouched to fill my water bottle as the chickadee sipped the trickling water from the rusty pipe. I admired the markings of the small bird. Then, suddenly, the blew flew above my pack and sat on a broken stob and moved its head around in excited, flickering movements. Just as quick as the chickadee landed the bird darted off. I patiently waited for the water to fill my bladders as the hillside casted a dusky shade as the basin cove erupted in alpenglow. After, I ascended to a knoll above a lonesome pass in the southern part of the range as a dark night enveloped me. 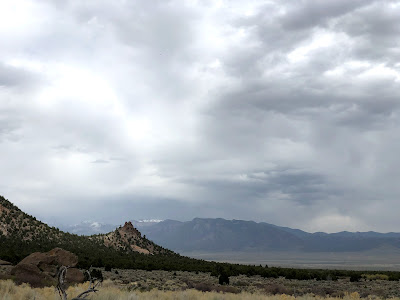 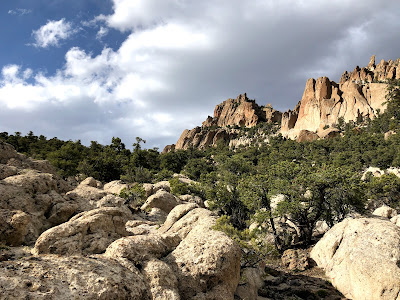 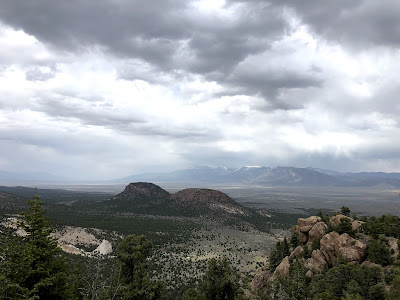 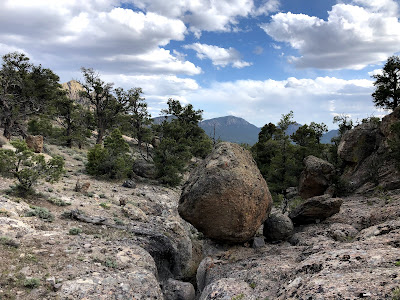 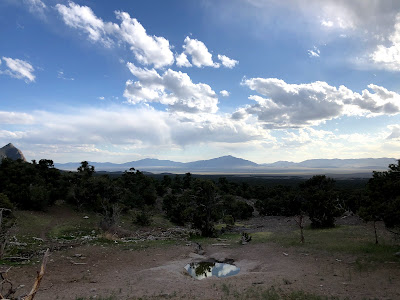 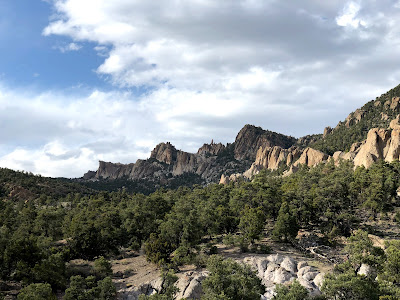 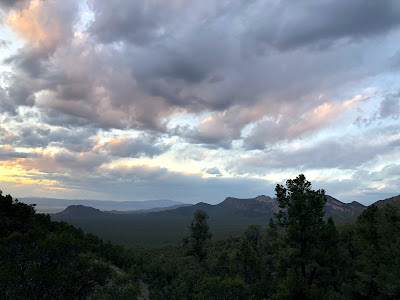 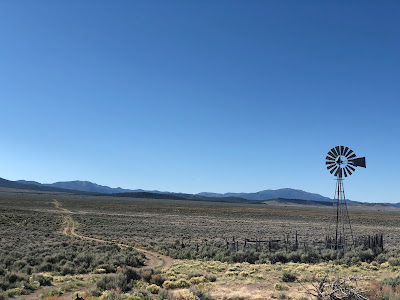 The Wilson Peak Range is a typical basin range but of with traits of the Mojave Desert chaparral. The route through this area follows little used jeep track through the foothills of the range until running into private land at Atlanta Road. From there the hiker takes a backcountry byway as the way through. I am considering looking at rugged route that would bypass the byway but the route may be too rugged. So, for the moment the backcountry byway will be the GBT route as it is still scenic and passes Tunnel Spring. Private land dots the area, so cross country ambling felt not feasible. I utilized the byway to ensure my legality and to have complete access of the public land. Near Pioneer Pass at a saddle the hiker ascends the steep two track towards the crest line. The round Wilson Peak looms off to the west where an observatory facility resides because of the range's remoteness and dark skies. 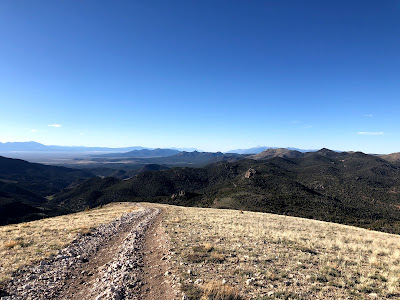 The nearly 44,000 acre Parsnip Peak Wilderness is a rugged and remote area with blanketed peaks of manzanita, gambel oak, juniper and mahogany. Because of these shrubs and trees travel across the ridges can be a hassle and agonizing, not only for the shins but the mind. Thankfully, one is not in the tangled mess for too long although the travel can be gruelingly slow. Solitude dominates the crest. In a small clearing or flat knob one can hear one's pulse beat because the air is so quiet. Thousands of feet down below the desert basin looks bleak and barren but more attractive than the burliness of the Parsnip Peak Wilderness. Throwout Knee Spring is aptly named because of the knee-wrenching terrain but is a sanctuary of relief as one can slug clear water and sprawl out from the tanglement of mahogany. From there the hiker weaves through Tex Canyon until a brief ascent up Red Cedar Canyon where one can make their escape into the desert below. From here a series of jeep and two track track across the alluvial fans to the highway shimmering in the distance. Solitude remains the hiker's companion as Highland Peak to the west becomes bigger as one nears Patterson Wash. The wash gouges its way through the lowest point of the basin where cattle trails make their way to the highway. The hiker has a choice from here, either walk into the town of Pioche which has all amenities or continue on to a potential cache the hiker has planted. 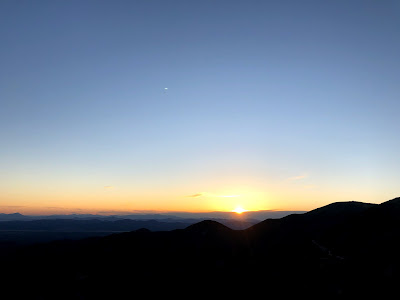 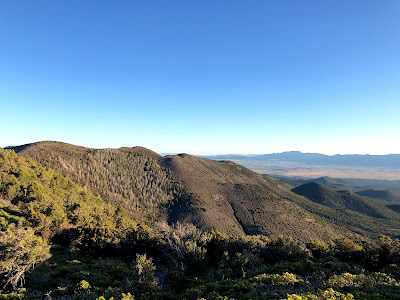 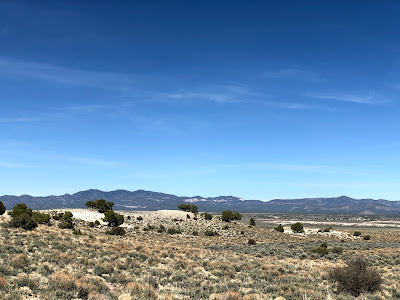 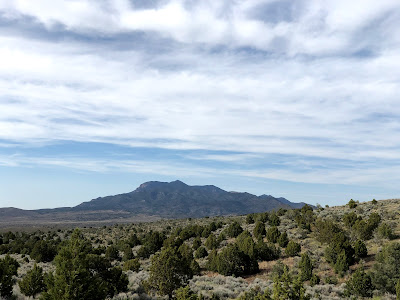 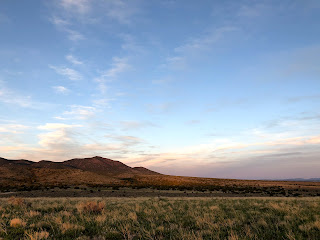 This is a long segment because of the long desert stretches and the brief spells into the mountain ranges. After Leaving Pioche the hiker briefly touches the Highland Mountains but the main goal here is to utilize the two springs, Pine and Connor Springs, especially if one has a cache in the area and has chosen to avoid traveling through Pioche for a resupply. The Highland Range has some brief tanglement of mahogany at a saddle above Connor Spring but open range motivates the hiker to gather some pace and mileage to cover the dry distances ahead. I ht this stretch in the late afternoon and walked under the purpling sky. The night skies felt adorned in the brightness of the full moon. Ritually I gazed at the moon and spoke some type of prayers and ambitions, some type of gratitudes and lunar invocations. By this point I felt completely committed to the Great Basin Trail. I camped under Chief Mountain in the high plateau dotted with juniper and pinyon. The next morning I played leap frog with a white wild stallion dusting up the loamy dirt between the sagebrush. Then, I found my water cache which proved to be beneficial. This segment holds the most unreliable sources and the longest average distances between springs or corrals. 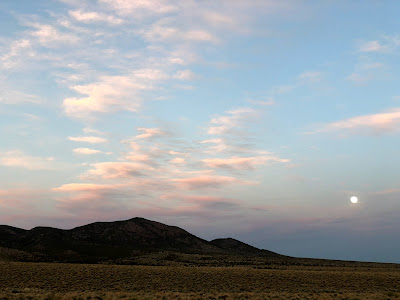 The OHV area surrounding Oak Springs Summit provide the hiker with an open path while hidden to maneuver through the range briefly I found a dirt bike trail that delighted my feet. The springs I passed seemed soaked up dry from older mining activity. Fences still lined most of the springs to protect from the tramplings of wildlife but all obstruction felt pointless because of the dryness. I did, however, found an insanely slow trickle that took 5 minutes to fill a 1L water bottle at Grassy Spring. With my confidence in water low amid the dryness and heat I felt lucky to have had my water cache fill my belly and pack with reserves.

The long straight line of a seldom used dirt road across Delamar Valley transfixed my squinted eyes as the heat waves kept the Pahroc Range appear still some distance away. Thankfully the evening became cool and breezy as the sphere around me dipped into the purple spectrum. That night though I startled awake from my torpid state, half awake yet half asleep, from a couple of sonic booms. Supersonic jets zoomed in the sky with the glow of dusk on the western horizon. A blue contrail glittered from each jet amid bright stars. I looked up baffled at what I was witnessing and I realized once I wiped my grogginess away that I was camping under the training ground of fighter jets from Area 51. 'No wonder,' I thought aloud, 'that the night skies are so fucking dark.' These jets continued to train at night over the next week as I paralleled north of Area 51. The only difference is that as the moon waned the Milky Way smothered the night sky seemingly darker than anywhere in the intermountain West I have been. 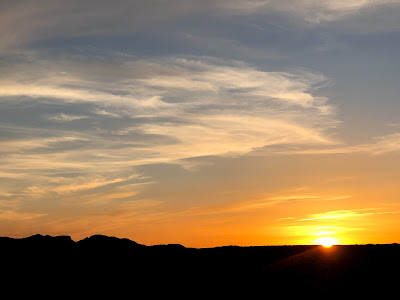 I have an unvetted alternate planned for the South Pahroc Range. I refrained from venturing up the route I had planned because I did not have the confidence in the lack of water. But sometimes when making a route you take chances and get lucky and sometimes you play it safe and miss out. In this case, I missed out. From afar the route looked doable from the east side. And from my camp in the Delamar Valley I stumbled upon a corral with tanks filled with clear water. As I passed through the easy way north of the range I could see cottonwoods at Sixmile Springs which I decided to mentally focus forwards as to not regret missing a wilderness stretch. Through a rocky gap of the Hiko Mountains I gathered up my food and water cache hidden among the rocky outcrops in a wide wash and hiked on to Crystal Springs and the roadside rest area under very large cottonwoods. Crystal Springs is the low point of the Great Basin Trail at 3,800ft above sea level. I waited out the heat under those cottonwoods and napped. 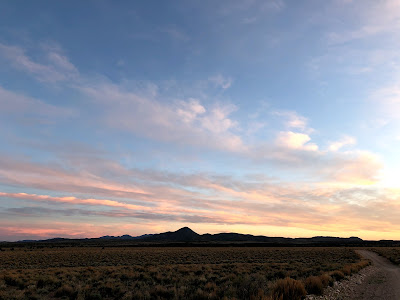 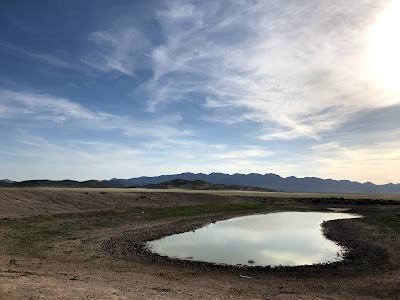 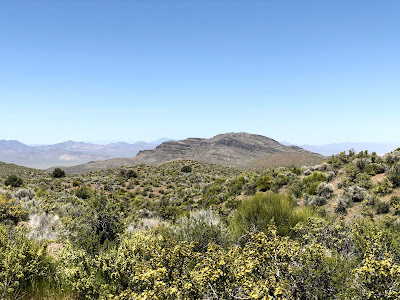 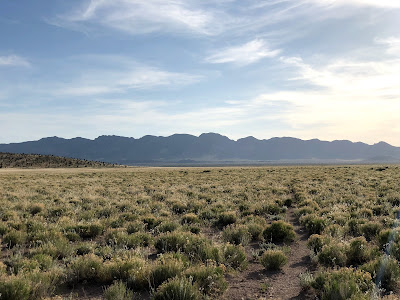 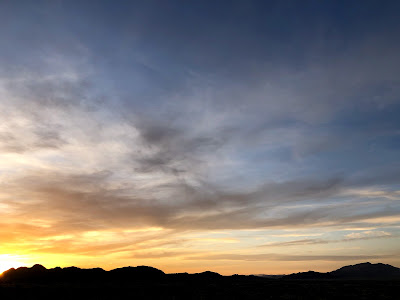 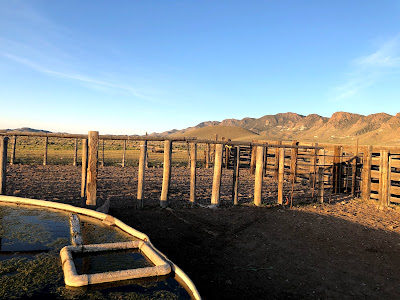 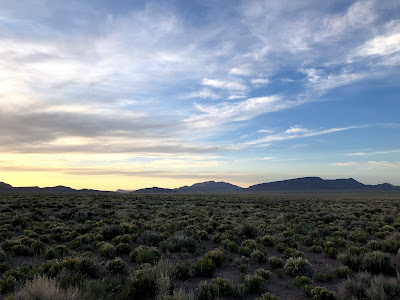 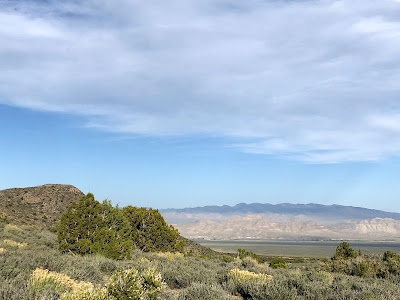