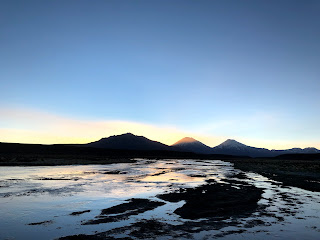 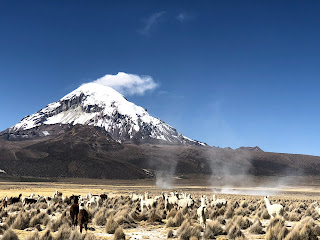 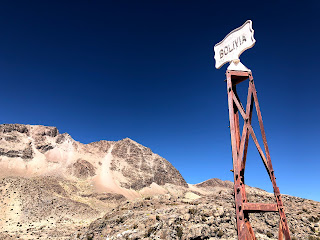 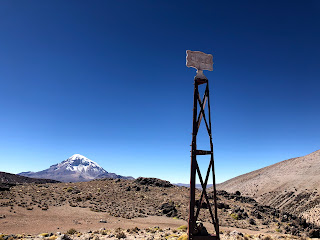 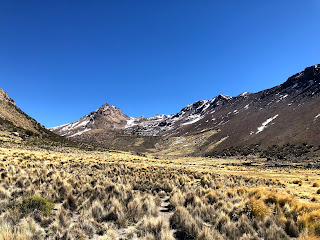 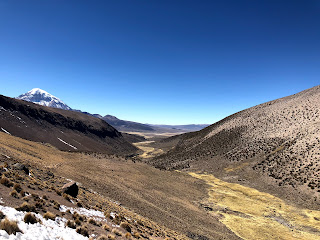 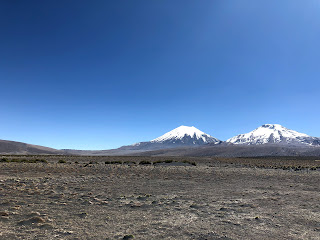 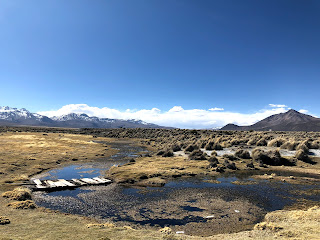 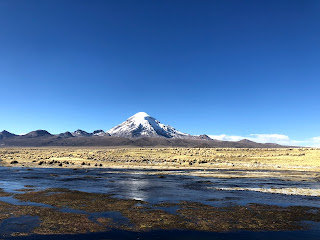 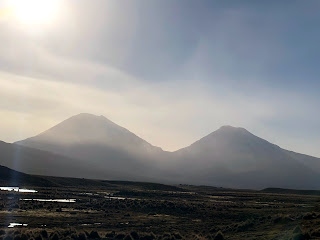 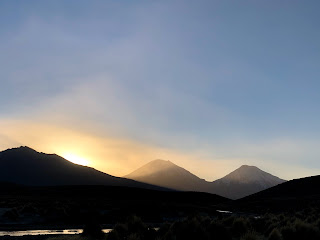 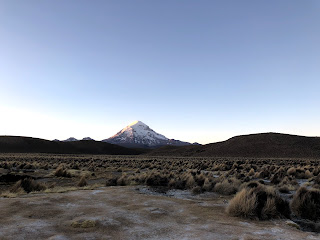 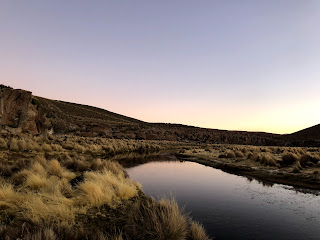 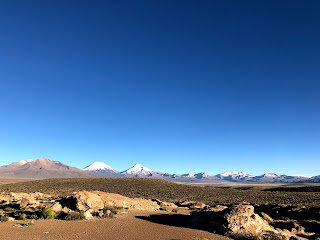 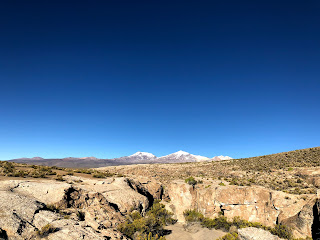 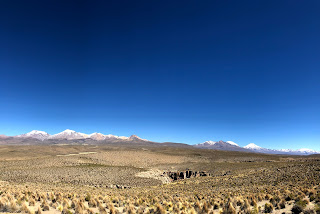 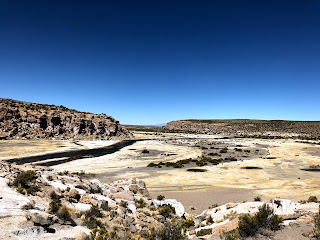 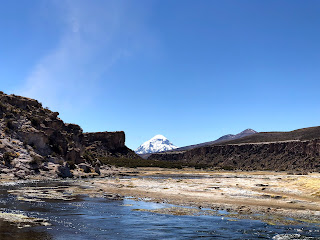 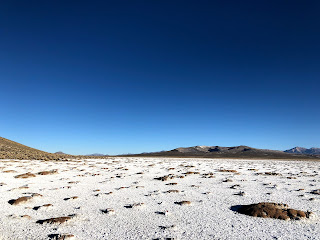 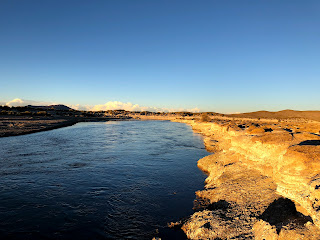 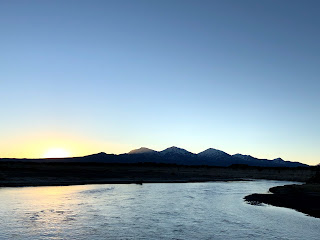 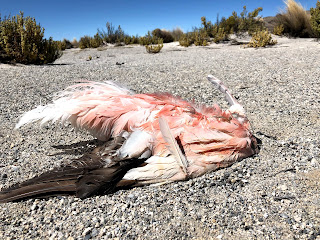 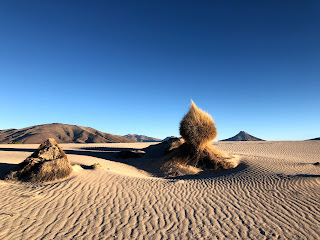 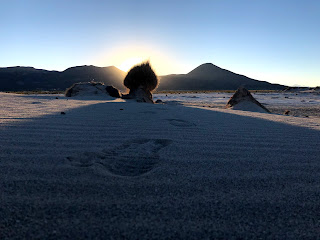 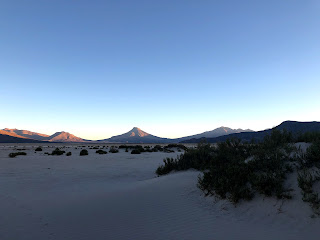 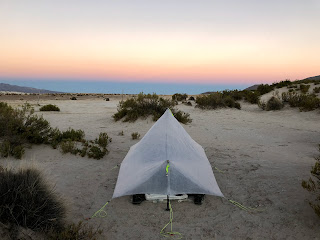 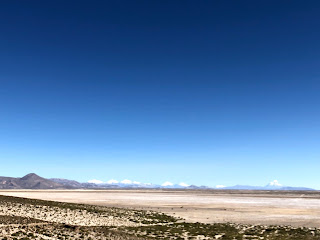 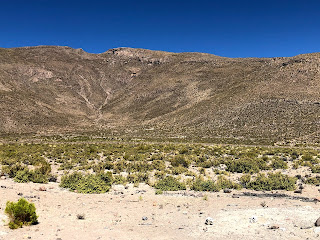 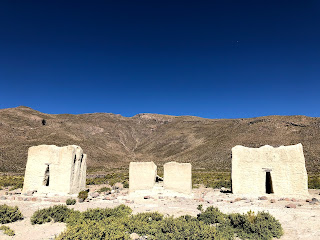 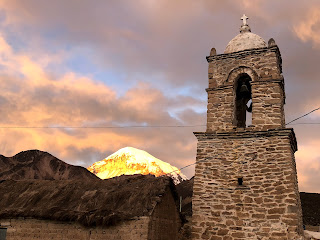 I had to determine the starting point of this route. I mean, I couldn’t just leave the tiny town of Sajama and walk south, could I? Sure, sure I could. But it seemed too generic. I looked at many ways, even circling the largest mountain/volcano in Bolivia. In the end, with my timeframe left, the additional potential miles going around the sucker, I went the route up towards the Lagunas Misterios. Really, I didn’t know until I got to Paso de Casiri and I saw a tall metal post signifying the border of Chile and Bolivia. The spot made sense to me: a border to border route covering the Bolivian Altiplano.

I can see the wind. Not just like a dust devil or blowing sand or churning clouds or wavy brush and tufts of grass or a whistle cleaving through canyons or arroyos or passes. The wind is so invisible it is evident in clear and translucent waves. A pixelation of heat being pushed by the wind, forming an entity, it blurs my cognition. I’m not sure what I am seeing is in my head or in front of me. Coupled with the reflection, the wind forcefully pushes the heat along. Now, it wasn’t hot or anything but I could tell immediately the reflection out here on the high plains was going to be intense.

Soft pumice and ashy ground sand, black and dark gray, meandering through large tufts of grass hardened to withstand the wind and the brittle cold poked through my shoes and pant legs if I approached the tuft wrong, constant braiding of faint llama and alpaca paths, through bofedales, salt deposits, bogs, and the volcanic sandy grassy areas—-all of these habitats provided my way. The Andean gulls, lappwings, the puna ibises and the giant coots all were closer than what I had seen in the Cordillera Blanca, which meant they were way bigger than I had initially thought. One large Andean coot barked at me from a marshy mess. The large black bird grumbled like a dog and the growl startled me. So much so, I dropped my water bottle in the sand. I also encountered a large bird, actually small flocks here and there up high in the mountains, like a emu but they kept their distance from me. Skitterish, they zoomed away from me going up steep hillsides, their necks bobbing up and down and back and forth. Although the dramatics, they moved away furtively and stealthily blended into the hillsides. Turns out the giant birds are Darwin’s Rhea. And who knows if they belong to a flock.

Towards the evening I attained a huge bend in the river. Cold was sinking fast, the wind fragile to the bones. I went up a hike in a side wash with huge blocky boulders, pinkish and a light tone of red, so near the Rio Sajama that the area reminded me of Utah and the Red Rock Desert with its maze of canyons and seldom rivers, the water erosion of time so stupendously scarred on the tender land. I camped under a full moon on a cliff bench filled with sand on top between two slabs to negate the night wind. Viscachas zipped in and out of sight, gone for the night to sleep in a grassy, warm bed in a hole somewhere. The sunset over the volcanoes and the reflective light in the meandering river caused me to ponder. I thought: ‘Shit, just like a mirror.’

I awoke to a faint glimmer of sunrise trying to crack the steely morning air. I reluctantly got up and packed hurriedly. My shoes were frozen from a knee deep river crossing yesterday late afternoon. Everything was crisp, not just my shoes. My tarp, my quilt, my hat, whatever. I wandered through red totems of rock and soft volcanic sand, as the moon, full of a fainting aura, still showed the vestiges of night lingering over some tall volcanoes.

Later, I wandered onto a high flat above the river tucked in between rolling ridges. Among the hills a small basin was littered with piles of old llama and alpaca shit resembling charcoal piles. I found about 5 skeletons of camelids, not sure of the species but by the look of the skull I would assume alpaca, as if this was a place to go to die or an inadvertent camelid cemetery. The bones laid compact in a hollowed out swale of old shit mixed with new shit while an occasional bone strewn about not too far away Come to think of it, seems as good of a way to go: in a pile of shit in the middle of no where, just calcifying and getting sun-bleached into simply nothingness.

The act of a crossing...starting out as one person and becoming something different at the other side, that transformative experience influenced by the landscape, the observation of time in the form of the sun and moon, the understanding of time passing, a reasoning of age, a measurement of knowledge, while also seeing the world move slowly; a crossing beholds some great humility. Am I hoping to transform or grow into someone else, someone bigger, wiser? No. I simply want more wrinkles.

My hands are already so dry the white of the dryness looks like snow lingering in deep couloirs, what’s leftover from the time of hardship, the windswept ridges accumulating white drifts around the knuckles. Considering I come from Colorado, a considerable dry climate, as well as having hiked the Desert Trail and other extremely mountainous and dry places in Peru, where my skin should be accustomed to such dry extremes, I venture to say the Altiplano may be a tad drier.

The fine volcanic dirt sifts right through my shoes. I’m taking my shoes off more than I usually do in sandy areas. It’s the volcanoes, the brutal wind, the intense harshness of this area, just pulverizes everything.

The vicuña dart across the barren plain like the American antelope. They keep their distance and circle back or stop after a sprint to keep an eye on you. A somewhat of a shriek or chirp comes out of their mouth, then the sprinting occurs. The vicuña look to be loping with their gyrating long necks moving back and forth, but their rumps and body move like something fast. In a blink of an eye, they’re gone.

My first sighting of a flamingo, a dead one, that I came across. A rotted wing picked clean down to the wing chutes with hardly any feathers, but just prior to that I stumbled upon a wing adorned with pink feathers, a stark contrast to the lonesome and barren landscape around. The second decomposed wind made sense out here in this harsh environment. The pink just didn’t fit in with the tans, the browns, the dry earthy colors. The vibrancy of the pink symbolized life where there is not much surviving out here.

I slept in between some sand dunes nestled so to be somewhat braced from the incessant wind. Sand occasionally blew on me but I was encased in my quilt. As usual, I buried my head into the quilt to stay as warm as possible from the sinking and brittle cold. The wind eventually died down and everything fell incredibly silent, the most deafening silence, one that made my heartbeat as loud as a bass drum. The nearly full moon lit up the surrounding moonscape, as if I was on the moon while watching from the moon, mirrors of one another, and a pearly incandescence made the dunes shine eerily.

The morning bog walk made easier by the cold morning. Bits of sun rays glistened on icy grass chutes and shards of salt. The Rio Sabaya braided in the pampa and I had to make a series of jumps to connect frozen mud with frozen mud. This is how it is out here: when you’re cold and walking briskly to maintain warmth with my nose bitingly cold with rawness, the cold can be at your advantage, while when the sun is blaring and it is very warm and you feel somewhat comfortable, you burn from the intense glare off the white ground, you dream of shade, and your nose hurts all over again. There’s always something on your shoulder making you feel more alive, more humble. Without it, life may be taken for granted.

I found myself walking by chullpas, or stone or adobe funerary towers, built by the Aymara culture. A small slit opened up the tower which faced to the east, just big enough to put someone of high rank or importance in a fetal position. The locals held rituals of offerings to the deceased. I passed about 20 or so, ancient with erosion and supposedly looted by relic-hunters. I found a plot near a couple of chullpas. 2 human skulls laid haphazardly on the ground in a stone square stamped into the ground. I gave a tip of my cap. Farewell, amigos.

I walked into Sabaya, the first 100 or so miles of this traverse. My plan was to hitch to Oruro about a 100 or so miles away, for I had made a bonehead mistake of not changing out my US dollars into Bolivianos. As I navigated through cobbled streets, I heard a series of thumps, and for a second I was brought back to that incredible deafening silence of the previous night. I walked right into a marching band and a parade of elementary students. I couldn’t help but smile and watch the kids as they strode on by with a band blaring When the Saints Come Marching In. I kept trying to read their signs and I finally picked up a trend of boobs and beast feeding: No la Biberon. I couldn’t quite get it, but marching to not drink breast milk or to not make breast milk or to not use a baby bottle or processed crap? At least according to the drawings on the sign. I have been asked frequently the past four or five day about why I am walking or what I am doing out here, and here, in turn, I want to ask the same thing. But I can only interpret the action as an observer or the walker. Meh, we all have our own reasons to walk, I guess. If only I could convey this type of humor to a Bolivian, then I think we could share a laugh at how ridiculous I must appear, or at least how hilarious life is.
Posted by dirtmonger at 2:09 AM