The Ausungate Circuit is one of instant marvel, exceedingly quick in self-gratification, and a powerful burst of beauty in this world. I didn't have any tender moments with any locals, nor their cute and meek dogs. The circuit simply had me agape in the splendor of an intensely beautiful landscape. The wondrous scene crammed in so little miles, no wonder I had a huge smile on my face atop the first pass, Abra Arapa. 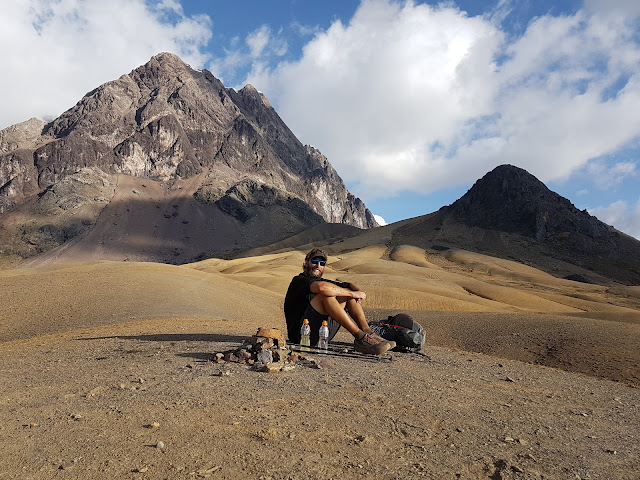 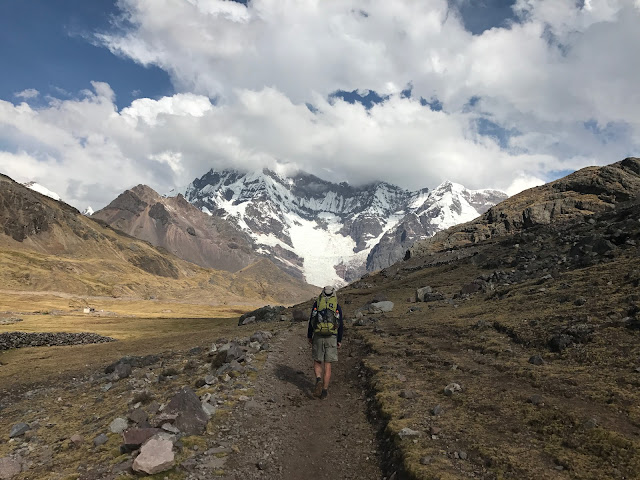 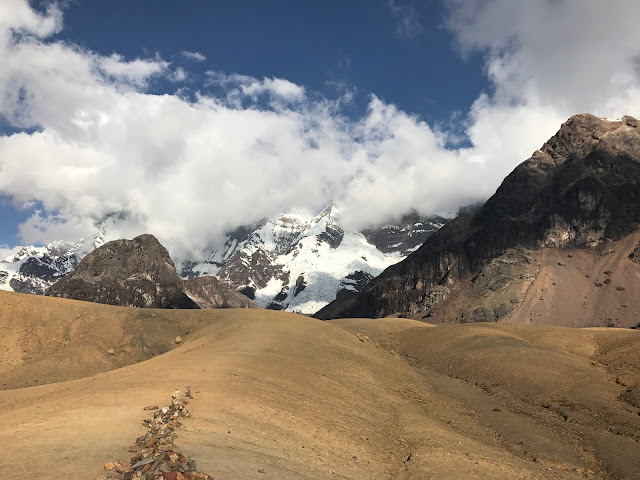 Maybe I lied a little. A Quechuan older woman in traditional garb came strolling down the trail. In tow, a young llama on a rope leash, a shepherd dog, kind and with different colored eyes. Shortly before this we had stopped to take a quick break at a refuge. Some porters had arrived there before their clients and we chatted two of them up, a father and a young son of about 8 or 9. As Swami chatted them up I got the feeling they weren't telling us everything. It's not like we felt in danger of some sort, I think it was in regards to us being independientes rather than clientes. For instance, the bathroom was 'closed.' Not a big deal, I didn't need to go. Simply asking the question of using the bathroom can get you to determine how some of them may perceive us. We were non-payers of sorts. Despite what they might believe, we went about our brief journey not on any guided tour, rather one that any of them would take on their own. No prepared meals from anyone else other than in the villages, same creaky and bumpy transport, and the understanding of the meaning of mountains.

Mountains are mountains----no matter where you're at. 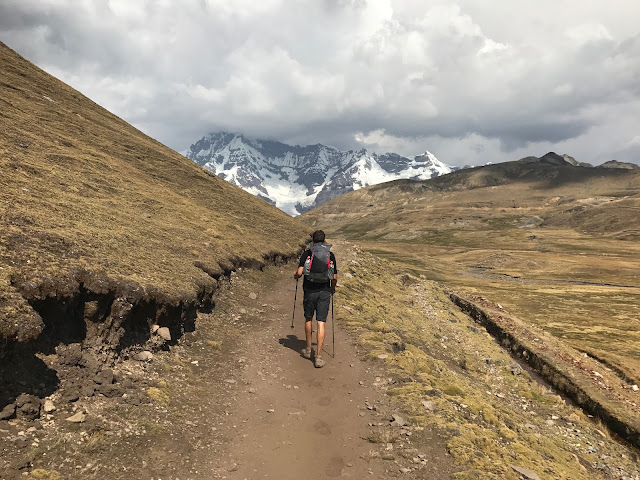 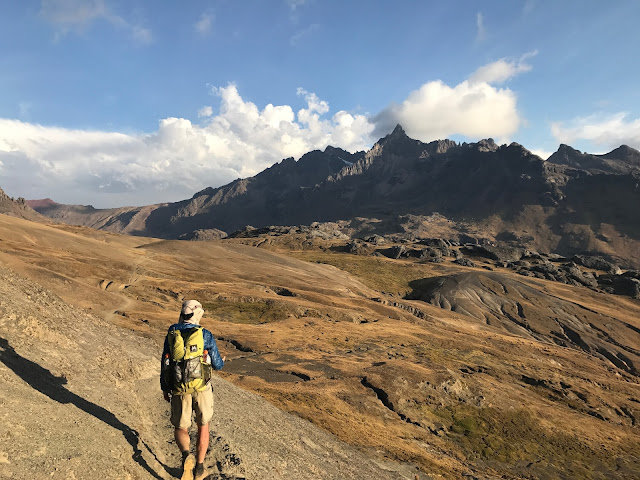 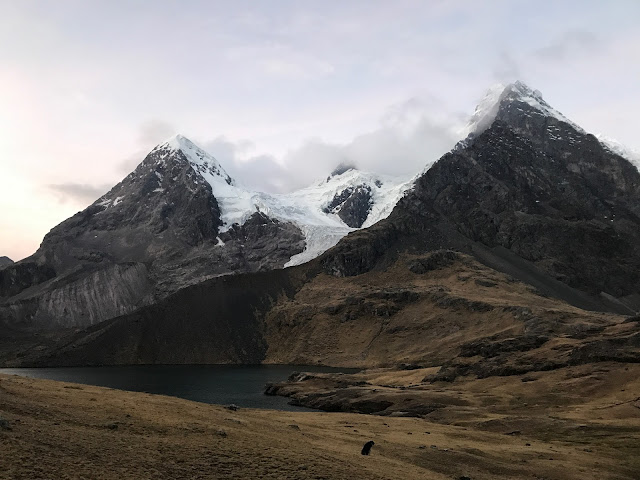 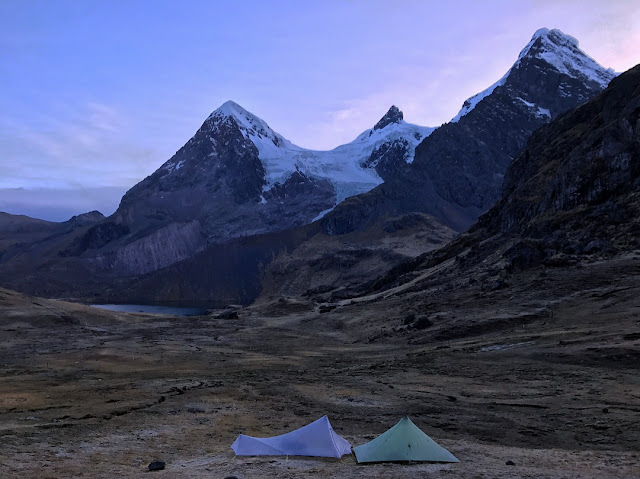 I breathed in that lush air, thick with an iridescent invisibility like the cold glare of a glacier. For some unknown reason, the air pops in the mountains, especially higher up. So, when the baby llama clumsily yet gracefully strutted up to Swami, her big eyes bulging out of a small triangular head, cute and precious, he startled back a bit as the llamita nosed her way to his hand, not quite yet relinquishing an open palm. But he did, and he smiled wide like a child, a glee and innocence only seen in the mountains. A charming moment, nonetheless. I felt tempted to continue playing with the llamita, however, the curiosity of where the woman came from, up so high, near 14,500ft, towing such cuteness, over came my playful spirit. Now, I merely wanted to walk, with my head looking up at Ausungate, and get to the other side of the pass to see what the woman saw, to see what her daily toil resembled.

After the Abra Arapa, a colorful Mars-scape, we traversed along a high mountainside, looking below small herds of horses and llamas grazed in what resembled multiple sunken pothole areas before the hillside plummeted steeply into the big pampa below. The sky darkened as night slowly crept shut like an old door loose on its hinges susceptible to a frail wind. We tramped down trail to a large lake, skimmed the grassy slopes and set up camp tucked at the head of a bowl. Through the night the local shepherd dogs incessantly howled and yipped through the night. I guess I can say the yowlings kept us up, but underneath two pointy and massive peaks drooping with a large glacier set between, I'd say even the yowlings couldn't disappoint us at that camp. 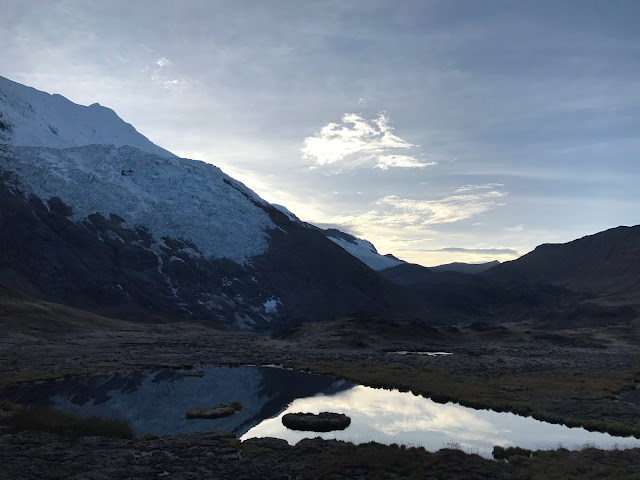 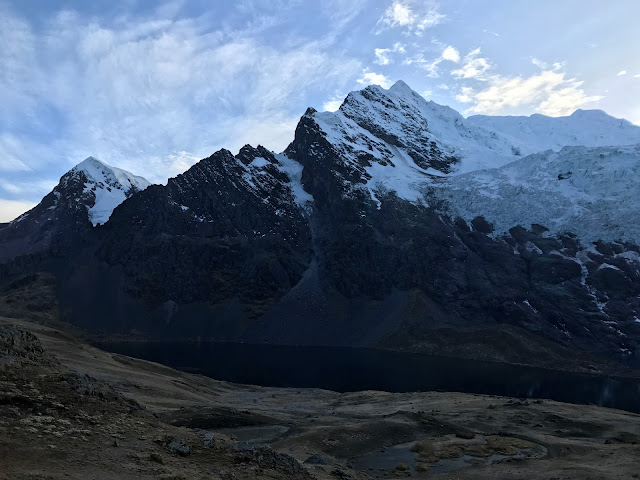 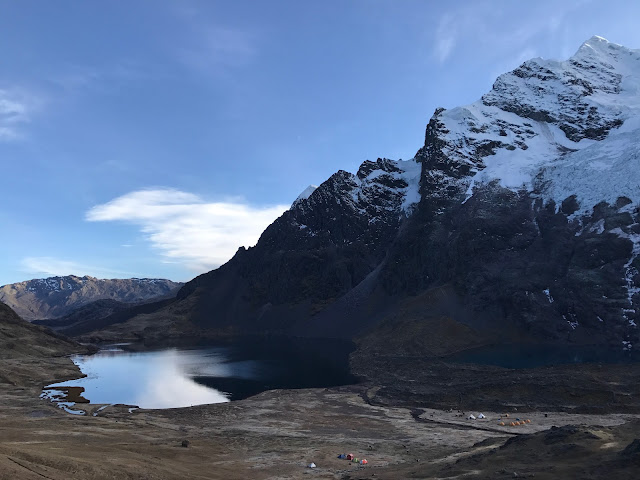 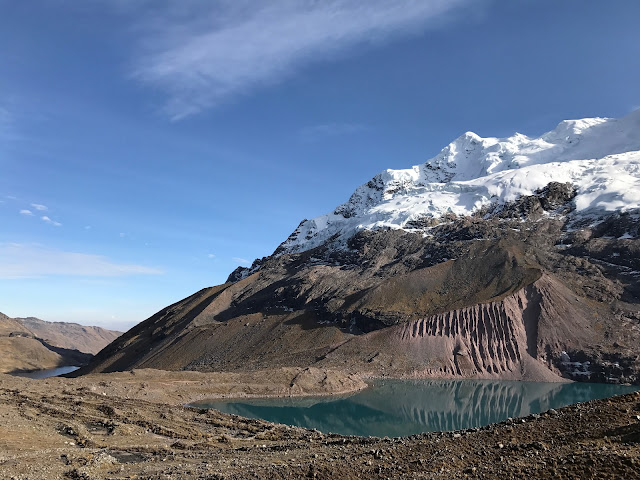 The next day, under a crisp and cool morning, we hiked by reflective lakes with oozing glaciers reaching the turquoise shores. Herds of llamas roved the hillsides grazing. Even as agape as we were, the morning was silent, and my mind fell in the visceral thought of 'silence is golden' and that cold, crisp air awakens you wholly.

Abra Palomani loomed over a reddish, brown-yellowish ochre landscape, yet dwarfed by the flanks of Ausungate. The seen: moonscape, reminiscent of an old worn red kerchief draped over a weathered and wrinkled face, a swarthy and sun-aged skin color permeated through the fizzled cloth, the nose the highest peak, the brow formed the edge of glaciated cirques, the chin looking down drainage. Imagine a drop dripping from this worn and chiseled chin in a faraway drainage to a body of ocean. Now, imagine a slew of kerchiefs, stacked upon each other, worn and torn and tattered, faded by the rays of the sun, eroded by rain and snow and wind, all slung over many faces lying close together, bodies splayed in all directions, eroding time and grit, red and a dingy yellow, stained brown from flakes of skin. This formed the giant Ausungate. 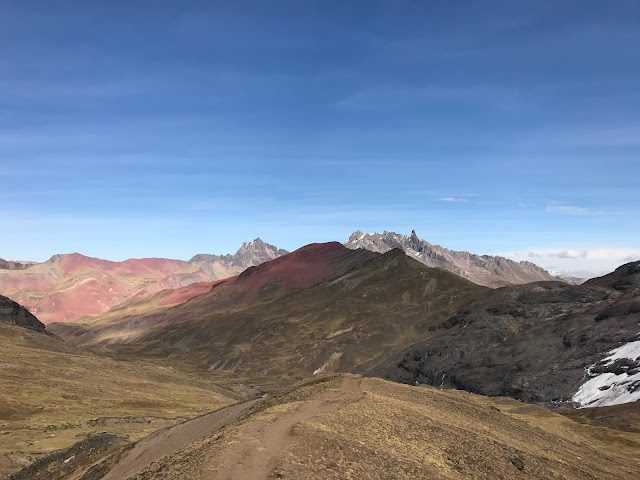 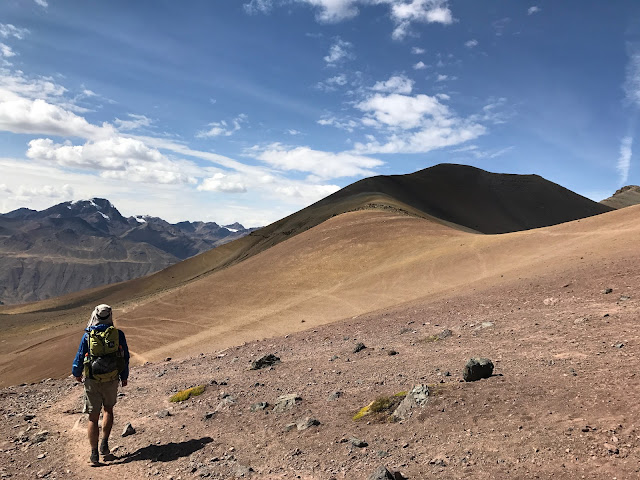 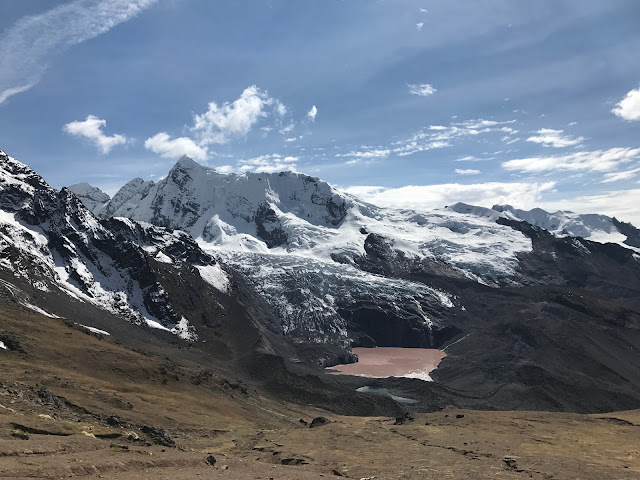 Hiking towards the massifs Hatun Uma and Ninaparaqu in a wide and long valley, a smattering array of earthy tones soothed the eyes. I felt incredibly small, like an ant in a confectionery dazzled by the sweetness with mountains of sugar to climb. We began a short steep ascent of Abra Campo before a gradual traverse on trail side-hilling barren slopes. Our pace quickened and I tried to keep a bit of distance from Swami. I didn't want him to see me welling up. I wanted this brief moment to myself----the enormous peaks flanked to my right, my feet grooving into the trail. I knew we would have a moment to share at the actual pass. But I welled up some tear-water flooding my eyeballs. I felt grateful to be alive for some unknown reason, an overwhelming feeling of being thankful for life.

At Abra Campo we sat huddled apart against a windbreak of rocks under the stone talisman of many cairns, the stalwarts of Abra Campo. Spirits lived here, deep in the mountains...

Do I feel this entry displays an actual account of a trek on the Ausungate Circuit? No, but I think it portrays an account of the mountains, of a peregrination in the mountains that you can find anywhere. Of why we do what we do. We praise these mountains in severe humility drinking the cold and clear water of runoff and, coursing through our soul, the marrow of rock and dirt filtering our lives. We walk on into more. 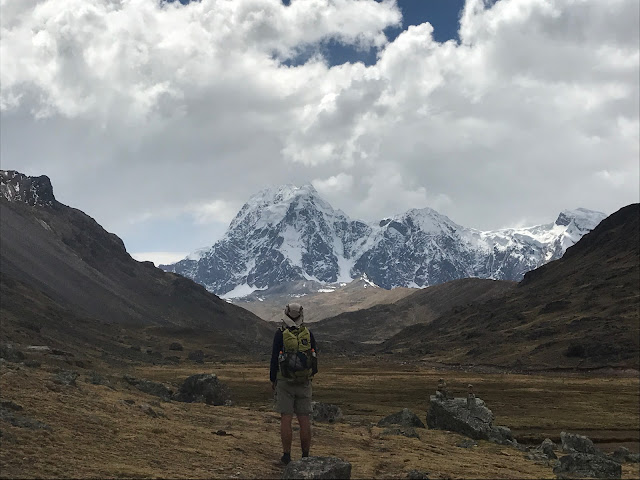 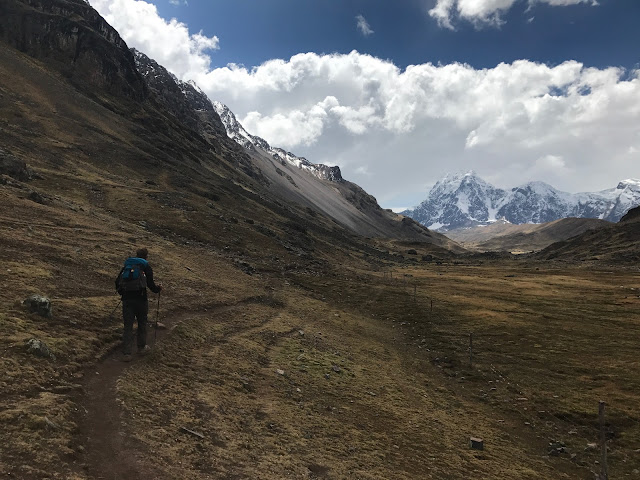 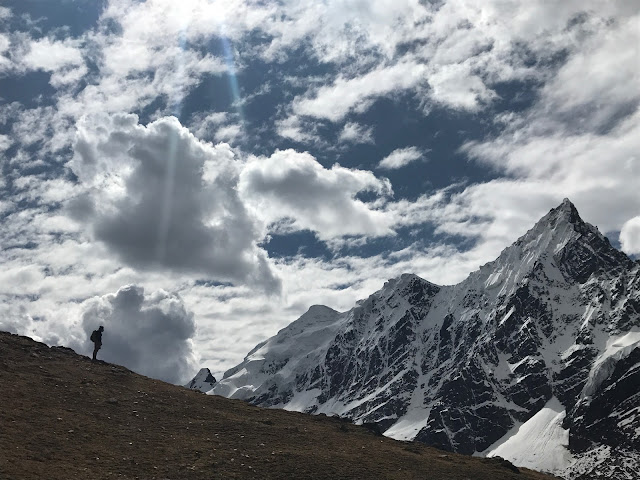 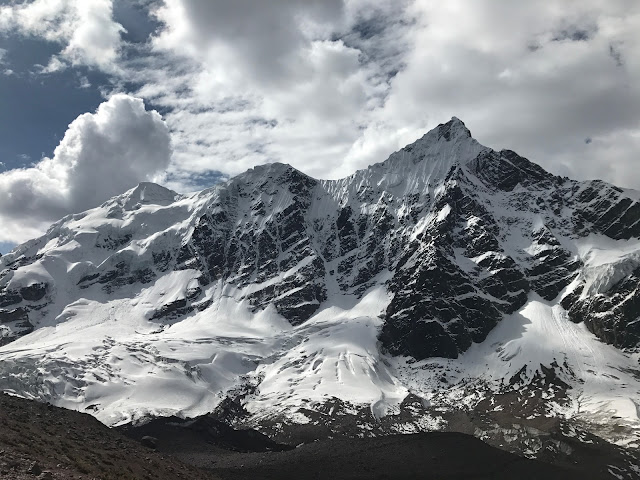 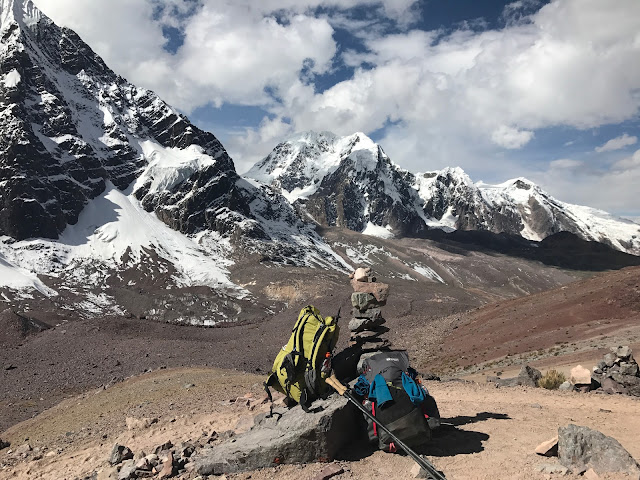 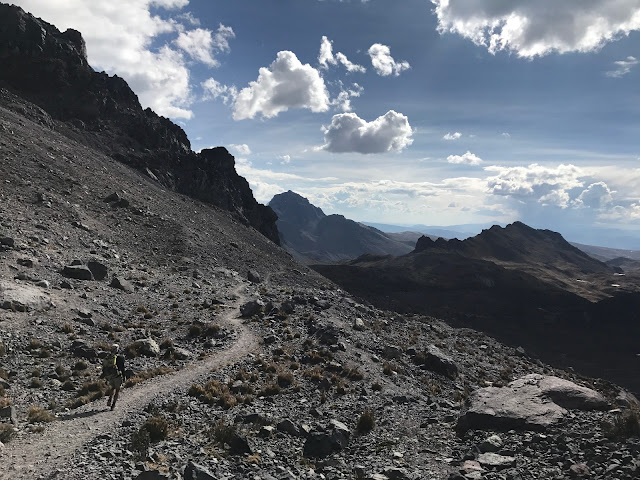 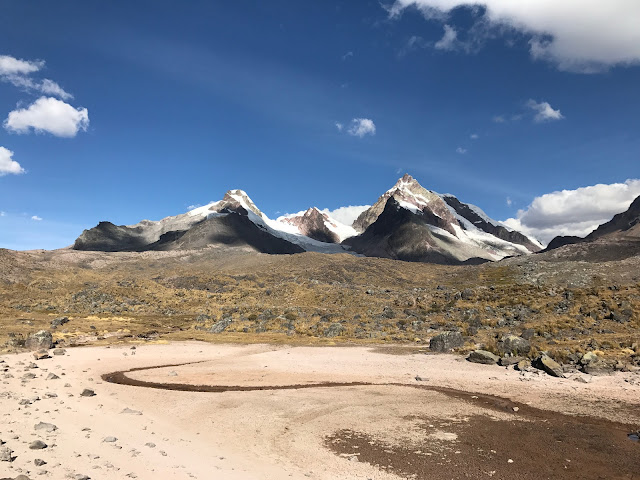 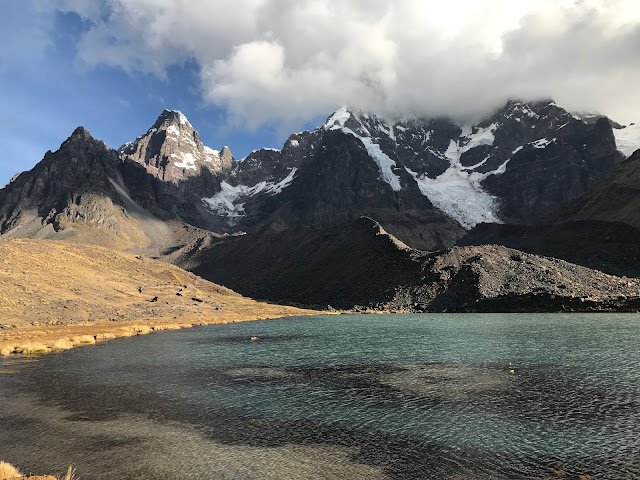 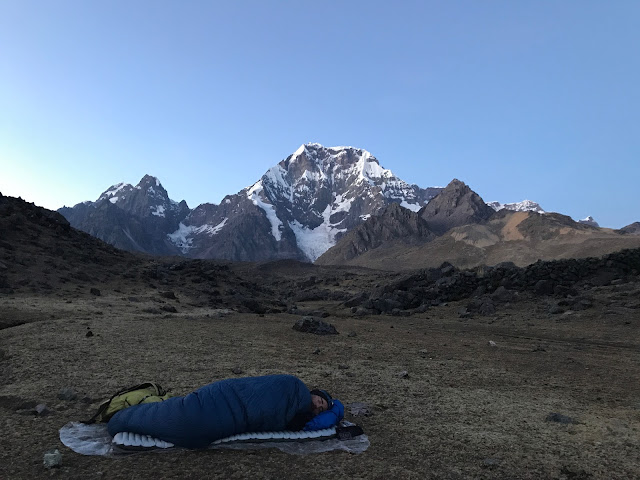 Posted by dirtmonger at 5:17 PM