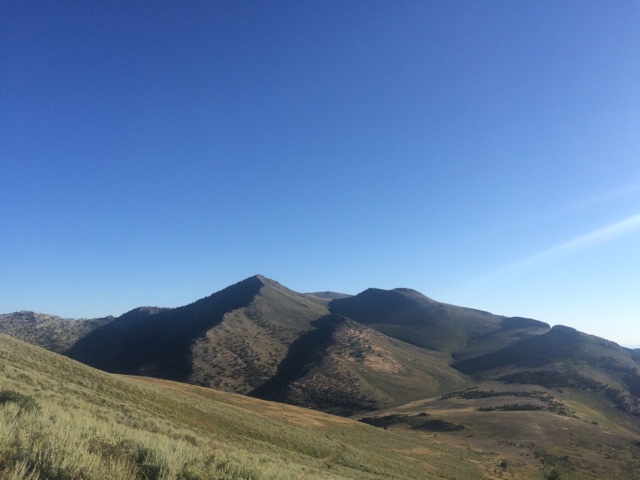 In my mid-20s, I got the notion that if the world was ending, you know, with a full-fledged nuclear war or of alien destruction, that I would go into the Ruby Mountains of northeastern Nevada. The range seemed protected from what would be an imagined violent ending with its remoteness. I stared at the range on a large scale map envisioning the trees, the rock, the isolation, and the endless views. In the end after I hiked the length of the range, the Rubys lived up to my expectations except that the range only tempted my curiosities: there's more land to explore. 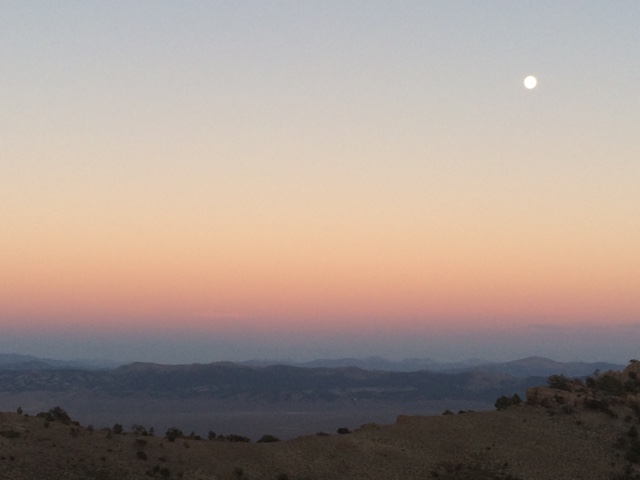 I started the traverse of the range in late May and bailed on the route due to extreme inclement weather and personal affairs. So, the end of July came and the opportunity to hike the range sprang up and I jumped at the chance. A lot happened during those few months and even how I finished the traverse of the range. I will spare the details of the events or my feelings and rather give brief information on the sections of the Rubys. 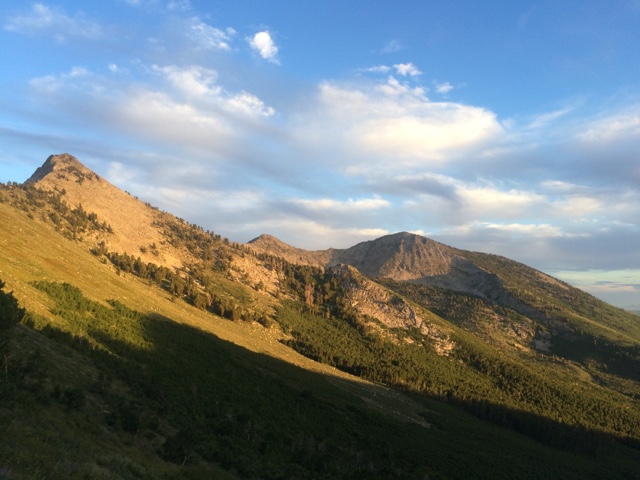 The Ruby Mountains are at least 80m long with 4 very distinct sections in route characteristics, climate, geology, and private land concerns. The north-south range is huge and posed as a large obstacle to early pioneers heading west. Here's a description of each section according to the route I took. 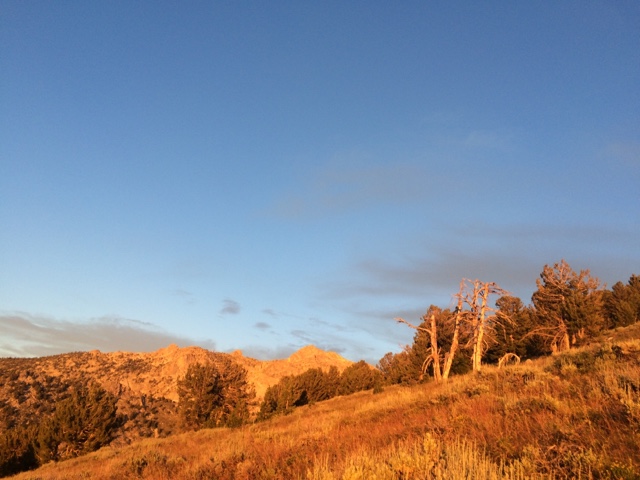 Reconnecting my footsteps near where the Pony Express Trail crosses Huntington Valley, I pushed into Cherry Spring Canyon until a little used road petered out. Wild horse trails led me up to the ridgecrest under a rising full moon. On the crest, a rutted dirt track turned into trail and I slept on a broad saddle below Mt. Sherman. The next morning I followed more wild horse trail along the crest until I hit another road and climbed steeply to Cass House Peak. 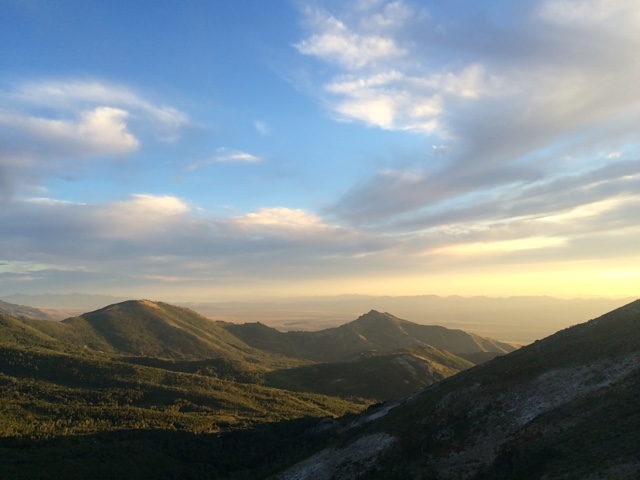 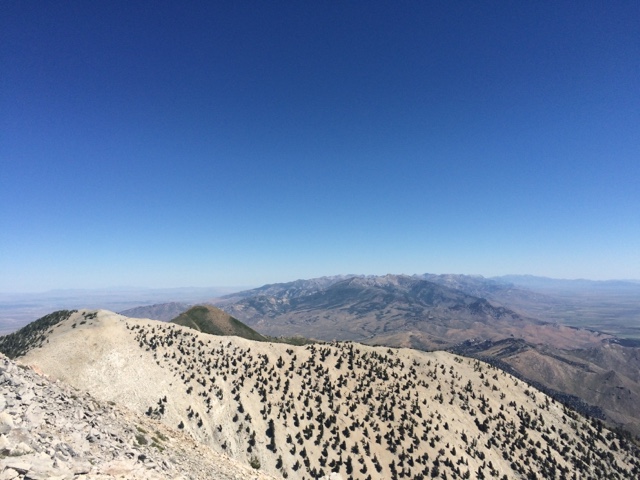 The southern range is extremely dry and water is non-existent. This seems like a cruel trick as the Ruby Lake wetlands sparkle below the eastern flanks as the ridge lines plunge precipitously to the valley some 4000ft in a short distance. The southern range lacks in trees considerably less than the northern portions of the range. The eastern faces of the 10,000ft peaks abruptly fall off to the valley below. None are as evident as Pearl Peak, which is a series of 3 undulating rocky peaks. Huge basins carve out massive drainages that careen crumbles of rock and boulders. Pearl Peak proved to be the most challenging part of the route and after the 3rd prominent knob I opted to scramble down a rocky ridge until I found a safer way down. I negotiated my way down a very steep head wall of an eventual creek. As in lumbered down, Harrison Pass glimmered in the afternoon heat. After scampering over more ridge line I ambled exhaustingly through the low part of the mountains. The heat took hold of me and I laid down under a small mahogany. 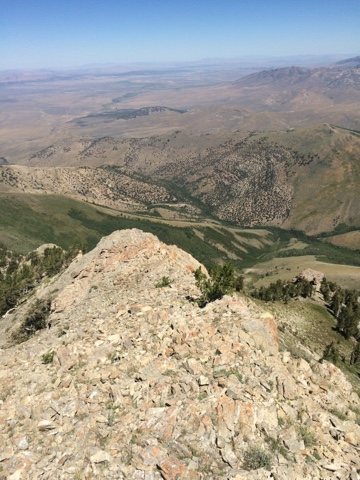 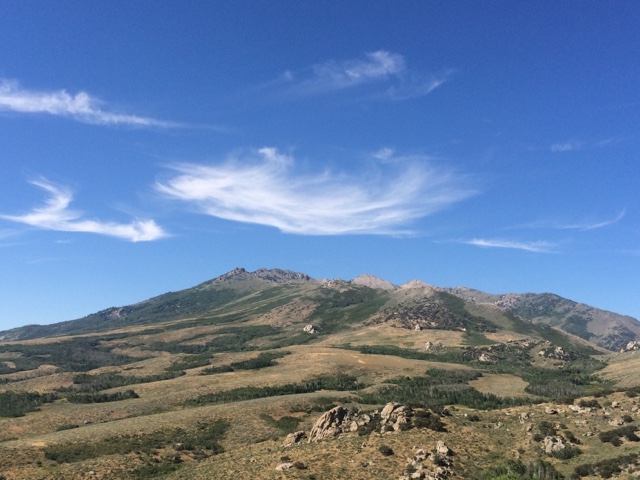 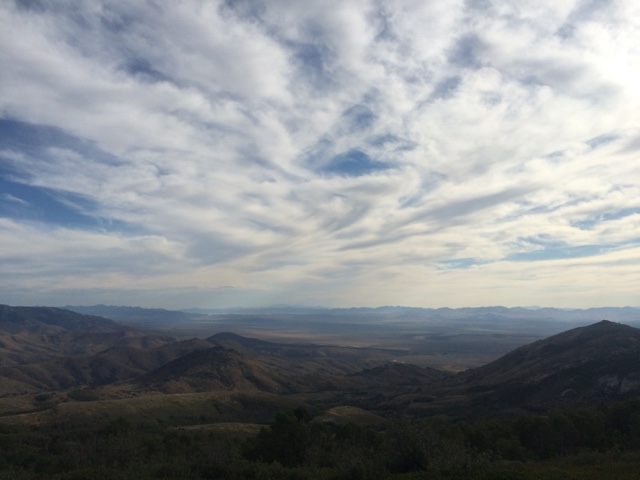 Arguably the highlight of the whole range, the Ruby Crest Trail strings the high lakes along the spine of the granite peaks. Starting from Harrison Pass, a jeep road tumbles to the trail head, then a long traverse around Green Mountain ensues. Water is plentiful and the greenery is thick with small aspen, gambel oak, and white pines. The trail stays low in elevation undulating up and over the ridges of the forks of Smith Creek. Large Aspen groves lay deep roots down in the drainages and beautiful old and gnarled white pines act as sentries over the higher flanks. 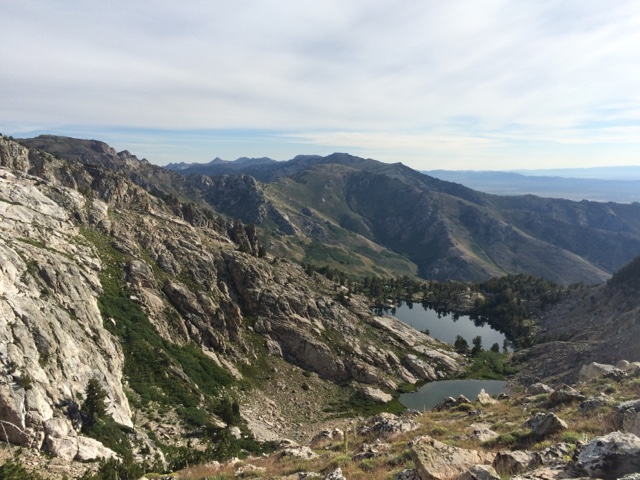 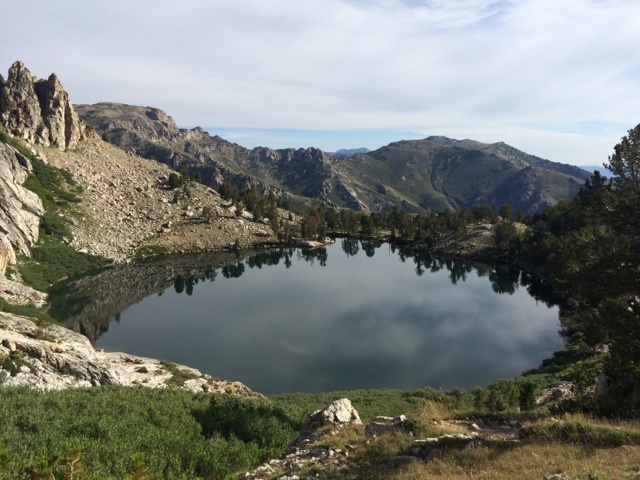 Overland Lake is the first alpine lake to attain in coming from the south. Tucked in a world of rock the lake squeezes in nicely in a jumbled granite basin. The blue of the lake is pristine and the quietude of the basin is simply sublime. The trail then skirts the streams of Overland Creek under the crown of Kings Peak. Craggy rock is ubiquitous in this unique environment. I kept thinking this part reminded me of so many different places I have been. From the High Sierra to the Beartooths to the Winds, the Rubys packed a wallop in such a small, diverse range. 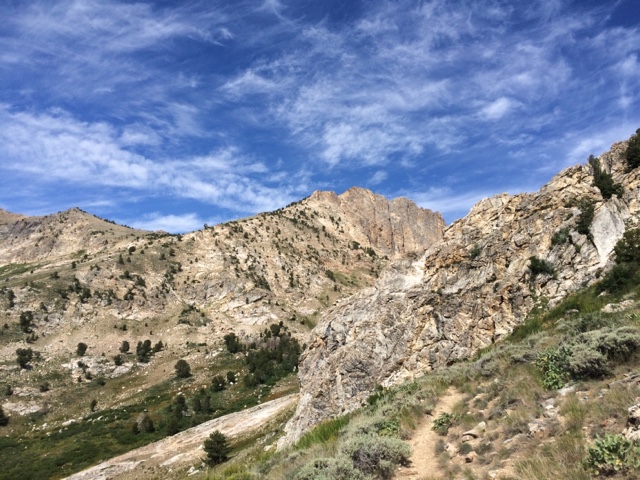 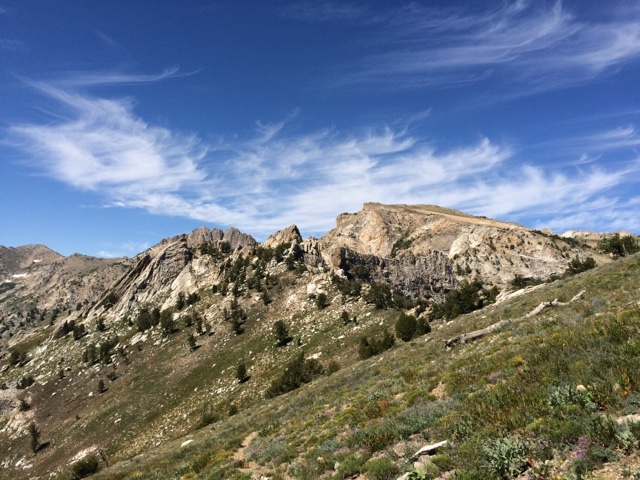 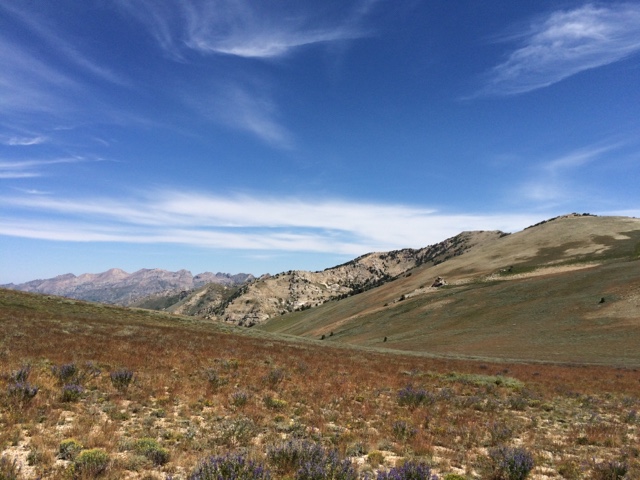 Once at the proper crest line, the trail follows the contours of the peaks and stretches for miles with endless mountain views. From one to the next the trail goes up and down without any trees or water. Eventually, you stand on Wines Peak, the high point of the crest trail. As Ruby Dome, the actual high point of the whole range, appears seemingly close but actually looms across valleys and basins, the crest trail begins to string the alpine lakes together. North Furlong, Favre, Liberty, and Lamoille Lakes, all placed in stunning scenery. In particular, Liberty Lake is very Sierra-esque and hold a blue in the water I've had a hard time remembering any that compare. The crowds thicken and the trail gets better maintained as you near Trails End. 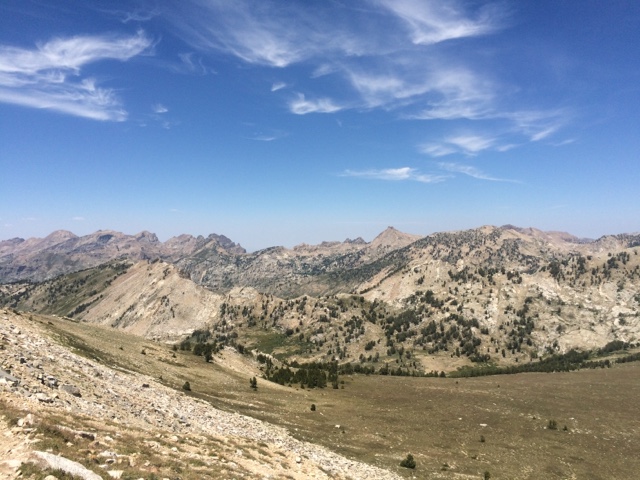 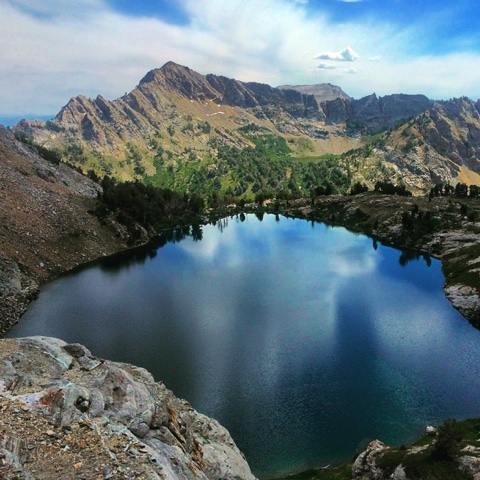 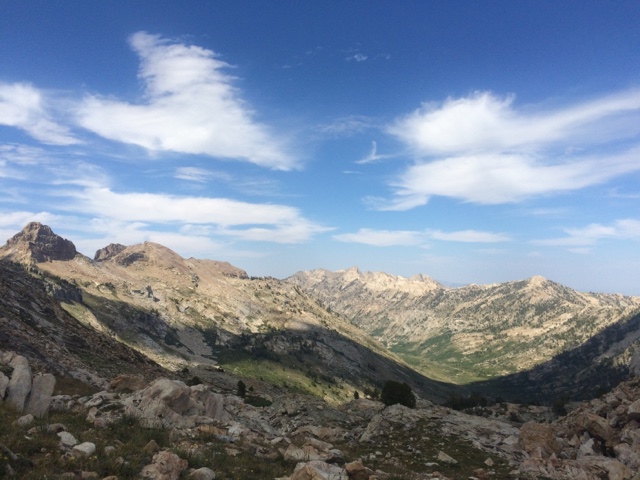 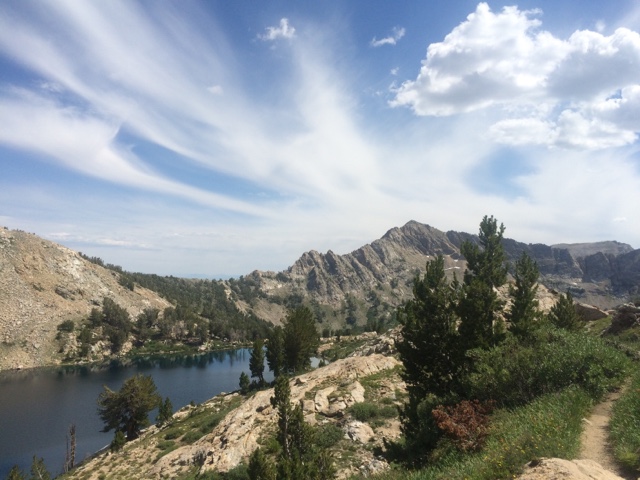 This section proved to be a challenge in regards to geology and private land concerns. First off, to cross country a route north-south in this section would prove to be a massive undertaking. No north-south trail exists along the length, the craggy high peaks prevent some actual crest walking, and private land stretches into the foothills preventing any trail traveling the length of this section although a certain trail is under construction. So, I walked down Lamoille Canyon along the paved road. I know it sounds rather silly to walk a paved road but it made sense to me at the time due to logistics, timing, and route feasibility. Although a highway plod, I enjoyed the glaciated valley with polished walls of granite. The road walk proved to be easy miles within a really tough section on the Great Basin Traverse. 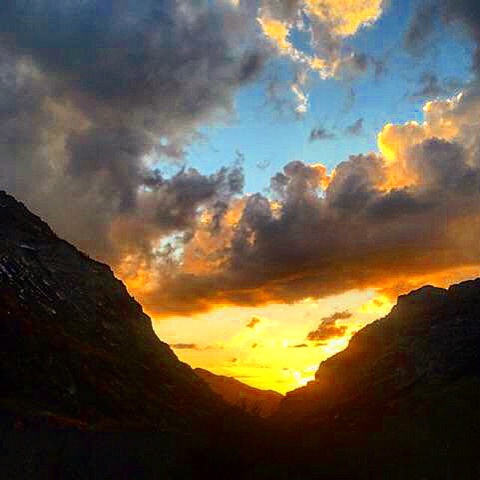 Near where the road opens up to the valley I took a trail that eventually fizzled out with construction signs signifying work was still in progress. With the trail work finished I bushwhacked through thickets of sage and dwarf aspen and eventually followed fence line. Picking my way apart the foothills I traversed lonely land, spotted a few cows, and had a lot of water available. I ended up going into the Soldier Creek drainage and at the crest I headed north until I picked a route down to Secret Valley. The high reaches of this section had trails that were pretty much non-existent. I made it work though, and I figure if I was to do this section again 10 times I could do it 10 different ways.

More plentiful with water, the East Humboldts are lush on both sides of the range, unlike the common Great Basin ranges. Access to the East Humboldts from the south is a frustrating issue. Private land cuts off access to the beautiful high country, so to get to the high country one must make considerable effort to get there. The Secret Starr trailhead is the only access point and takes you through dry, unbecoming country. Once you hit the Boulder Creeks options open up as you can amble up any one of them. I chose Second Boulder Creek. Old and scant trail went up the drainage. Basque lineage in Northeastern Nevada showed in the carvings of the aspen. Without the Basque shepherds the trails in this wilderness would be non-existent. If you're seeking solitude, then the East Humboldts are the place. 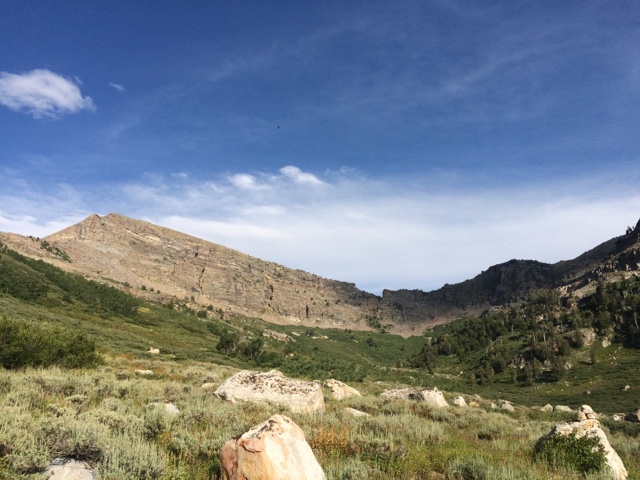 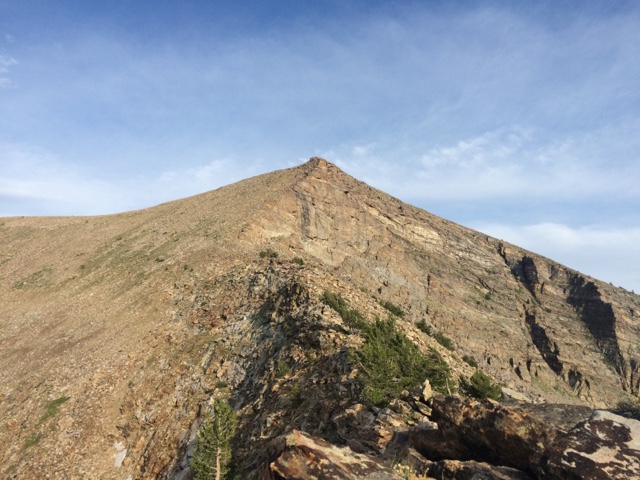 After the creek opened up above the timbers, I found an old sign saying: 'East Humboldt Highline Trail.' Humboldt Peak glimmered above me as its huge pyramid buttress raised enormously above the terrain. I couldn't help but wonder about this extinct trail. Later, back in civilization, I found out through some research that that old trail ran some 28m across the high country of the East Humboldts. I know deep inside it could rival the more popular Ruby Crest Trail. Like its southern trail brother, this Highline would string lakes and high peaks together, and end at a popular trail head. 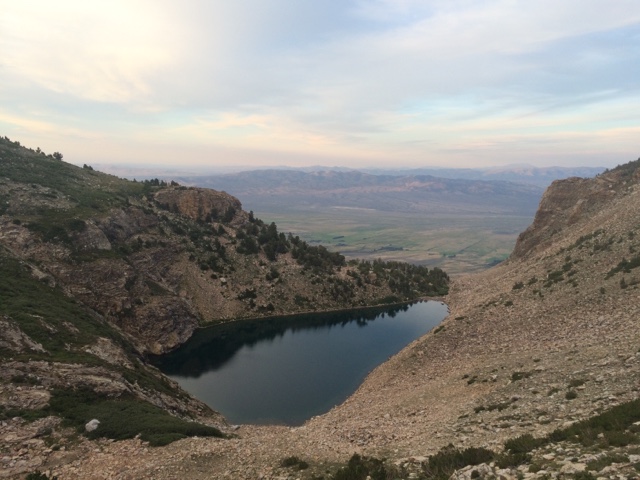 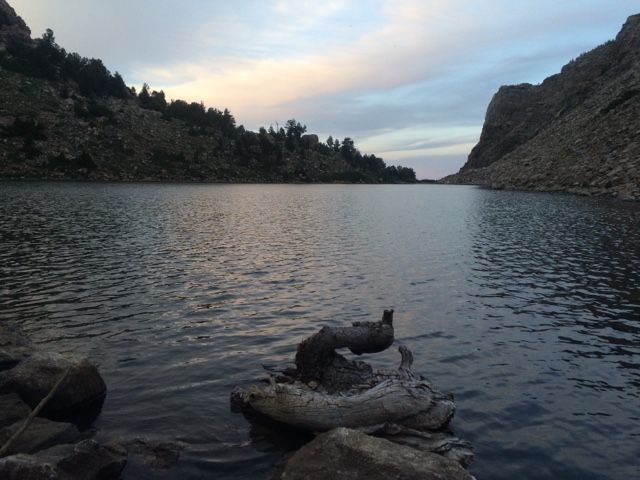 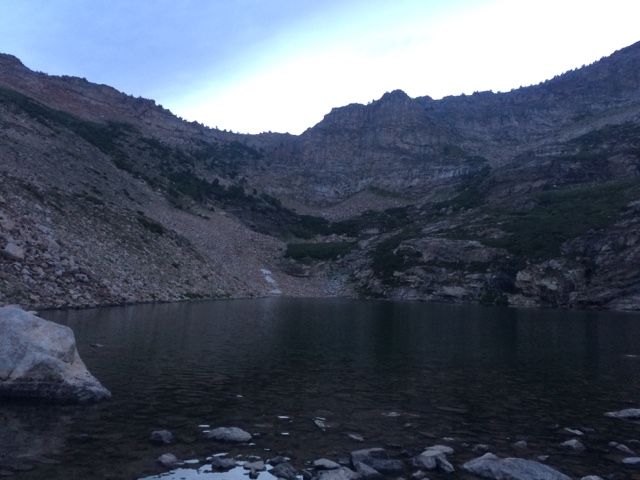 After traversing the ridge line between Second and Third Boulder Creeks among heaps of talus and boulders, I climbed down to Boulder Lake. I took a deserved rest and I spotted a mountain goat on the cliffs above me. This moment of rest was exhilarating, so I picked up my stuff and headed over the next pass and spotted Steele Lake. The silent quietude of the scene soothes my soul. I breathed very slowly, the wind gusting on the exposed ridge, and the steel blue of the isolated, tucked-away lake inspired me. This moment is why I do what I do. Steele Lake explains it all.

I camped at the lake and prepped myself mentally for a cross country hike to Lizzie's Basin where Hole-In-The-Rock-Mountain sits. After endless slopes of boulder fields I finally made it to the huge basin. The walls went straight up to the tops of the peaks. Water streamed down in ribbons along narrow chutes. I took a minute to soak it all in. From there, I found a well-maintained trail that I wasn't sure was going to be there. My hopes crashed after 2.5m when the maintenance ended and I had to negotiate cow paths through a dwarf aspen grove. I had to slink to my knees and crouch my way through aspen tunnels. Frustratingly this went on for hours and I lost scent on any type of trail. I headed down to the lower foothills which only proved to be just as tough in hiking. Constantly going cross country up and down between big drainages tired me out. I kept my focus and kept my eye on Chimney Rock. Closer and closer I got to my beacon. Then, I touched road. From there it was an easy stroll in the town of Wells. 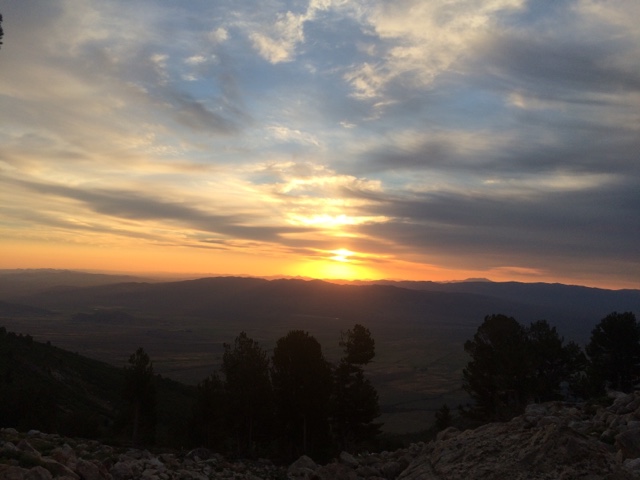 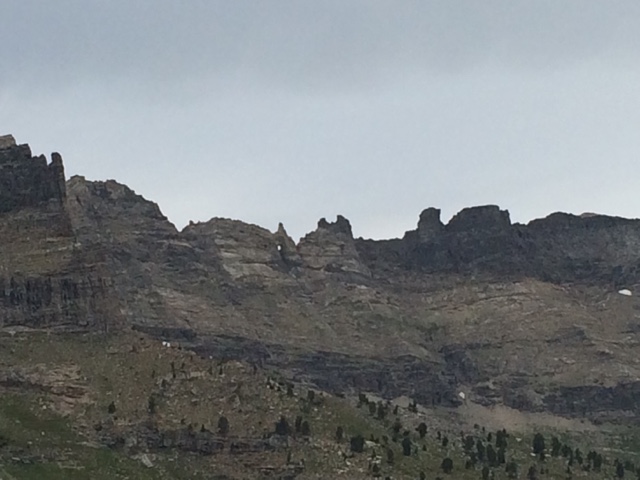 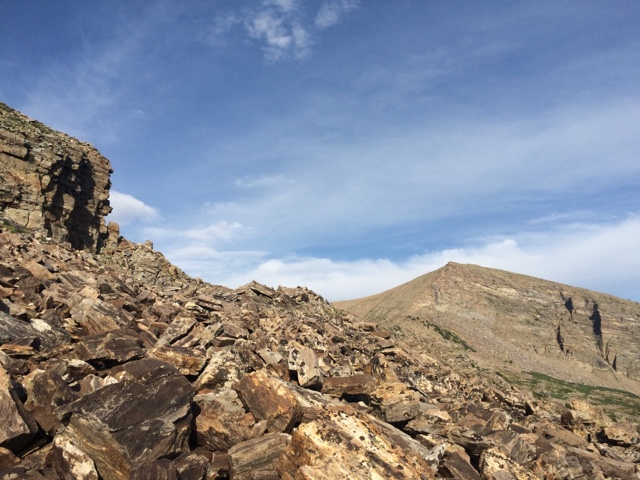