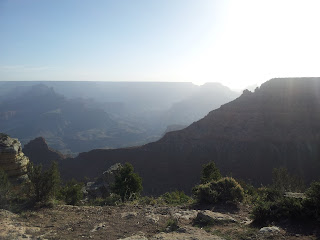 I basically took 2 'neros' in Tusayan. I left late in the afternoon and slowly walked my way over to the Grand Canyon Village. On the way, I found out my sleeping bag would be re-shipped again once Marmot got the claim from FedEx. A mile later after that phone call, the bag would be shipped the next day. So, I gave the address of a motel in Kanab, UT knowing I would get the bag quicker.

I then made a phone call to Little Bug, 2011 PCT-er, who lives in the village and works in the park. Sure enough, she answered and offered a place to stay. I was thrilled as this gave me more time to stay off my inflamed arch, which was more tender that day. Plus, her, her boyfriend Aaron, Cody, and John (fellow travelers as well) made for a welcomed social experience. We talked of the CDT, as that is what Little Bug and Aaron will be hiking this June, and just had all around good laughs. I awoke feeling refreshed and ended up trading out sleeping bag liners with John, my fleece for his lighter, more compact silk liner.

From the General Store I walked to Mather Point and gathered my first view of the enormous chasm. In the morning haze, I stood in shock and awe. Holy Shit!!!! That's the first words that came to mind... 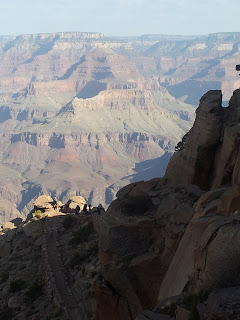 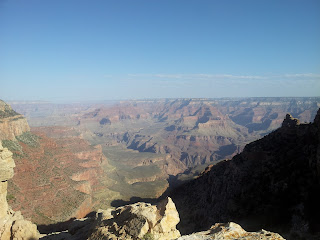 Slowly, I made my way to South Rim trailhead. I immediately went down the trail and I admit I was agitated by the swarm of hikers. People with huge packs and lumbering side to side like goliaths, streamlined down the trail, wrapped around switchbacks like mules, snout to hindquarters. The herd... I tried to slow my pace, with my arch in mind, but stubbornly I walked swiftly trying to escape the throng. But the massive vista came into view and I slowed a bit, especially since I had space.

I wended my way down amazing trail cut into steep, chiseled trail right into the cliff side. I encountered a lady and her 2 young boys of around 10. She kept on telling her youngest to 'Go ahead!' At first, in my head of course, I was like 'what the hell now, just get outta my way, nerd!' But, then I realized he just needed to piss. The mom turned to me and stated his embarrassment at an awkward age and I hollered at the young lad to go ahead and I would then turn around and stare at the Grand Canyon. He handled his business and I chatted them up until one of the station houses. Her husband arrived and we talked trail and the young boys' eyes widened when they heard what I was doing. I softened up and began  sharing lightweight tips for backpacking and such. 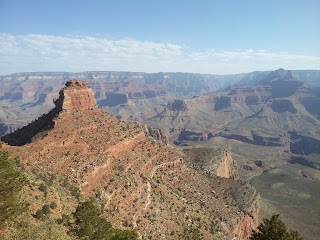 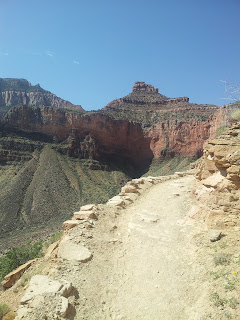 Later down the trail I met a pack train with the mules toting people. C'mon! Really!? It was just mind blowing to me to be in such a wild place and have a theme park feel to it, especially in such a hard place to make things convenient and comfortable for people. What a little exercise and physical exertion does for the spirit and soul.

At the inner gorge, I stood in the middle of the bridge spanning the Colorado River. I marveled at the mangled rock stained purple and black all crammed together in a sinister looking amalgamation. The violent beauty stood in stark contrast with the smooth pink and red walls thousands of feet above and the placid, green Colorado River.

I crossed and entered the Phantom Ranch portion. Swarms, more thick clouds of people. Air conditioners buzzed from the cabins. One dude even walked the path carrying a bag of ice! I walked on by every campsite, all filled with campers sitting at their picnic tables. It's pretty funny seeing people who want to experience the Grand Canyon in a side canyon not actually seeing the Grand Canyon sitting around doing the same stuff they would be doing in a park in the city. In fact, Lint and S.O.L. said that when they went into the ranch main mess hall heaps of people sat around reading novels and playing cards in an air conditioned environment. I thought of the words visitor and tourists, ones I wish not to be a part of. I walk through a place absorbing my surroundings, moving with the flow of life, one step at a time in time... 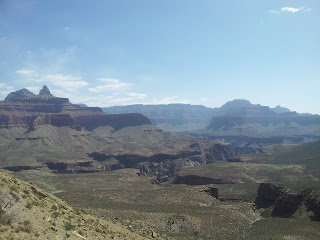 After that the trail quieted and no tourist ventured any farther. A long and gradual climb up Bright Angel Canyon held me captive in a serene and peaceful state. Roaring Spring Canyon arduously ensued with trail cut right into gnarly cliffs. The trail work was incredible. I finally attained the North Rim, some 9,000ft in elevation. Completely deserted, I tried to find Lint, who had texted me that him and S.O.L. were staying at a cabin. No luck in that, and after standing in the cold for a bit I headed down trail. I hunkered down for the night amid ponderosas. The wind howled and the night got brutally cold. I awoke to frozen water and a cold blustery start to the day, which, in fact, held bluster the whole damn day, by far the coldest day on trail. I walked huddled with my arms close to my body while the forest boomed. I felt to be near an angry ocean walking along a gloomy, gray shoreline. Each strong gust roared in deep groans reminiscent of crashing waves. The occasional thunder: falling, plunging trees. At least 3 fell within a 100ft of me. I plugged away, heading north, on guard, looking up at every creak and moan I heard from above. 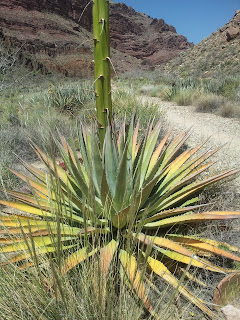 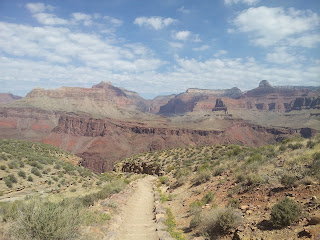 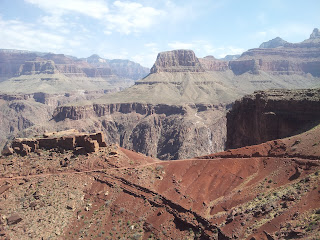 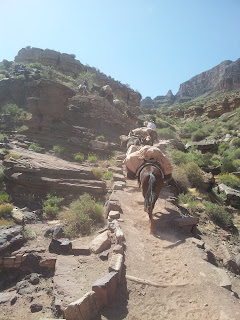 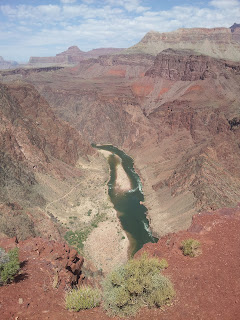 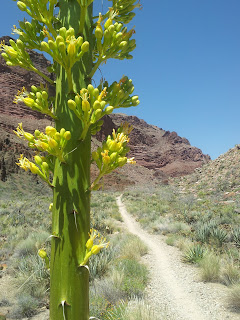 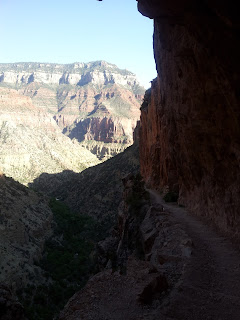 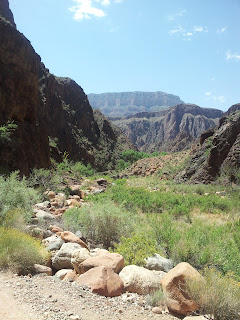 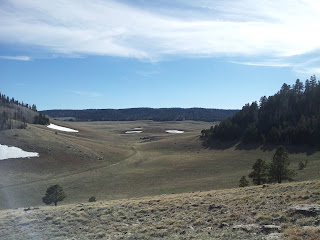 I walked on top of the Kaibab Plateau through tall forests, up and down ridgelines and the occasional long valley, green ribbons splayed pleasantly within depressions in the plateau, thin green fingers with fresh spring grass. Snow huddled in large banks and the wind continued persistently to be naggingly cold.

Again, the next morning I awoke to frozen water. My head clouded from the cold and my fingertips frozen, I broke camp and sauntered along some of the same country I walked through the day before. At one point, I laid on pine needles abreast of a giant ponderosa. I stared skyward and watched the lofty heights of the neighboring ponderosas swirl in the breeze. I slowly fell asleep with whishing in my ears soothing me. The afternoon sun felt just right. Sometimes my eyes would drowsily open and I would observe the thick branches sway while the tips of the branches sprouted with pine needles would dance and shimmer in the wind and sun. Towards the late afternoon, I met Lint and S.O.L. at a forest road. We cheered and walked excitedly till it was time to camp. We could've the AZT finished that night but knew we would have a long wait at the AZT northern terminus.

At camp, we farted a lot, massive thermals coming from our dirty, grimy haunches, and spoke of trail tales. We were all excited to finish and happy to walk to the Utah border together.


We dilly-dallied the next morning as we only had 11m to walk in and our rides would not be there until around noon. But of course, like horses walking back to the barn, we hiked faster than we could control thinking of food and motel amenities.
First leg of the Vagabond Loop complete.
Here are some photos from the end... 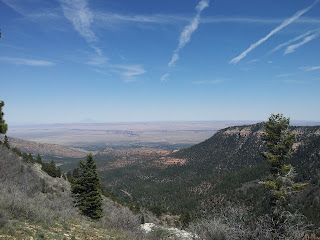 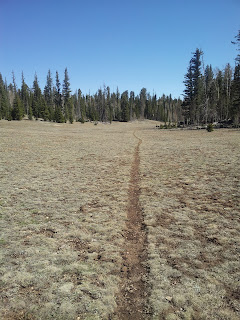 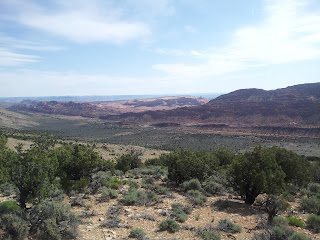 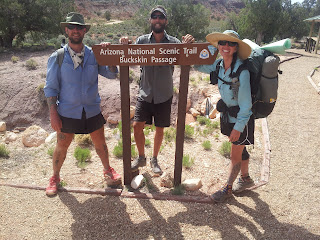 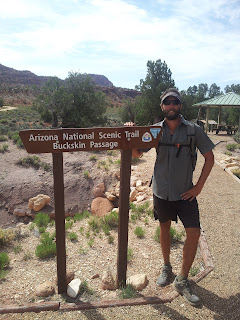 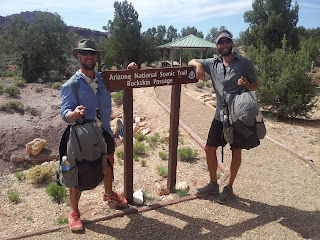 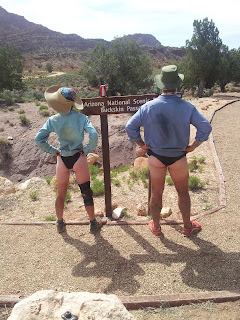 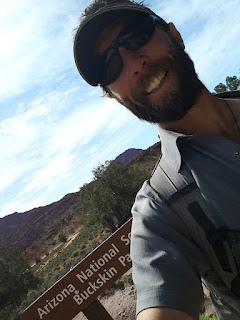 Posted by dirtmonger at 8:04 PM