As I said in my last entry, I was pretty upset at myself in the previous section, despite the high mileage. My behavior was reckless and I took too many gambles that I normally would never take. 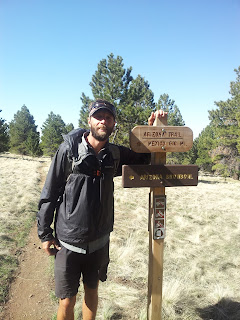 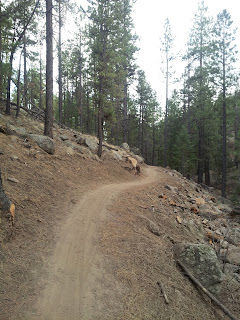 On my walk into Flagstaff, I finished my disgusting concoction of blood red tank water mixed with a putrid green pea protein powder. I grimaced as I forced down the last swallow, especially since the cold air had made the morbid smoothie a thick frozen glob. However, as the last glob went down I strove to find a way to rifle through my complex thoughts and emotions and figure something out.

At a diner restroom I stared at my haggard face in the mirror. Wrinkles were caked with dirt, my eyes look deep set and dark; I was stressed. At the table I ate an enormous breakfast and began my list of emails. Then I wrote a list of things to be done. All this stuff had been in my head while hiking and I was finally able to get it done. 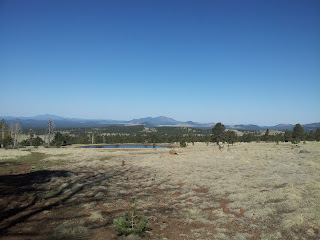 After eating I walked to the library which was closed. So, I walked over to the outfitters for a new pair of shoes, plus an extra pair which I then shipped ahead for the Hayduke Trail. I also purchased a sleeping bag liner because the Marmot Plasma I ordered is lost in the mail somewhere, which my momma has taken the reins of tracking it down. I then walked back to the library and hurriedly finished 3 blog entries. The day ensued with many more tasks and by the time I was done I had walked an extra 5 miles. Then I had to food shop.

The enormity of logistics of the Vagabond Loop really overwhelmed me in the last section. I am a task oriented person and when my task list gets overloaded and I 'm not able to get them taken care of I can get bombarded and fatalistic. That evening I left Flagstaff I slowly walked up Schultz Creek. I slept soundly that night...and I was frickin' warm too with my new liner! 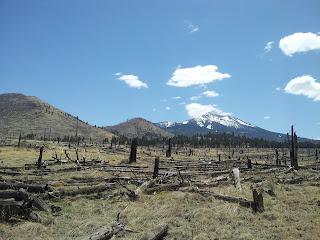 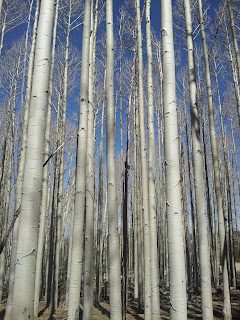 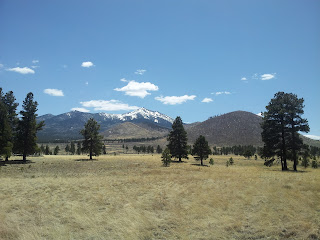 Off and hiking the San Francisco Mountains, I noticed differences in this mountain range than the previous ones I hiked. Aspen made a startling appearance, giant Doug fir brought more shadow to the forests, and sub-alpine conifer signified a higher and cooler elevation, and ponderosas stilled towered over all the flora. Lingering snow patches hung in the shady sections as well. The trail was well groomed and I hardly noticed the climbing.

I ran into Loup and Indy, other AZT thru-hikers. I walked with them for a couple of hours enjoying their company, both really cool dudes. Later while hiking among large cedar forests splayed among grasslands another AZT mountain bike race, Eric Foster, approached from up the road. He pedaled alongside of me for about an hour. We had a sweet conversation about pushing your body's limits, mental exertion, and about doing things the unconventional way. I was envious of his paincave zone during his epic race and his impending hike and bike carry across the Grand Canyon. I told him I wished we had met at the South Rim as evening was about to hit, then I would pace him across the world's biggest hole. He pushed on and the day flew on by as I thought about a future passion in mountain bike endurance racing.

Before Cedar Ranch I encountered large jackrabbits, the size of medium sized dogs. Each time I saw one they would let me get within 5 feet of them. They were spooky looking with their hearts palpitating rapidly through their pelts and their huge dilated pupils that  made them look frighteningly possessed. I could not help but think of the attacking, menacing fanged rabbit in Monty Python's The Search for the Holy Grail. 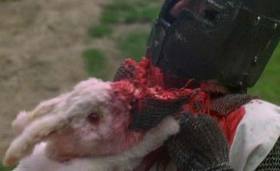 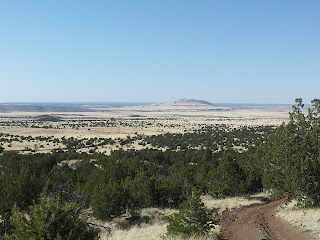 At Cedar Ranch, I found pinkish scummy water, had my Vlop (veggie slop) dinner and watched the sun plummet into the western horizon. I ate up and chased daylight walking down a lonely road. The grasslands laid to the east in golden hues, furry pompoms of sparkling gold dust shimmering in the fading light. Beneath a grassy butte dotted with cedar I walked alongside 2 mares, one coal black, the other sorrel, and their 2 foals, both a tawny brown. They drifted up to the steep grassy slopes beneath the rim of the butte and kept their distance from me. The foals stayed near their mothers side occasionally awkwardly galloping to hurry up to get under motherly protection. In the east, a tarp of blackness rose from the bottom of the land. I hurried on, for there was no immediate camp spot as the fields were filled with prickers and Russian thistle, or tumbleweeds. No matter, the late afternoon stroll amongst the shadows signaling dusk capped off a glorious day.

Then, as I neared Tubs Ranch, a waft of aromatic air perked my head up, nose high. The wind, redolent of burning cedar, piqued my senses and I felt mesmerized with the dusky blue-black scene held before me. The San Francisco peaks dazzled in the last sunrays. I felt the warm still air fighting off the impending cold wind penetrating forth; the old warmth still fighting to save the day.

Night soon conquered the light and I trekked up a rough, rutted scoria road to the first large bench of a broad mesa. With the sun felled behind the roundness of the globe, the show ended.

I found a sandy bed in a large roadside waterbar ditch. I gazed skywards and I spotted Orion. I said aloud: "Everyday, every-goddam-day, just like this..."

The next evening I bedded down in a large ponderosa glade on the Coconino Rim after a long, somewhat easy 37m day. I stopped a little early as my right foot's arch ached with a sharp pain.


The next morning I stiffly walked into Tusayan. My body told me I needed rest and I found a reasonably priced hotel room. 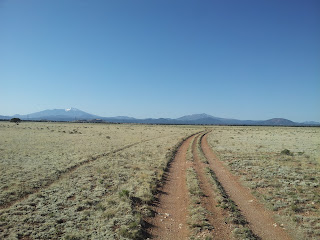 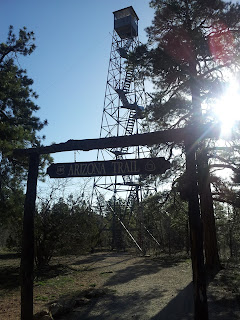 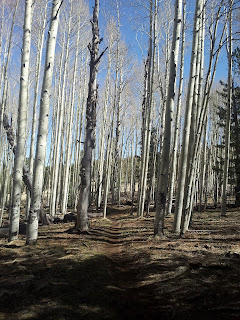 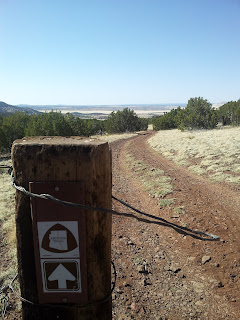 Posted by dirtmonger at 9:40 PM