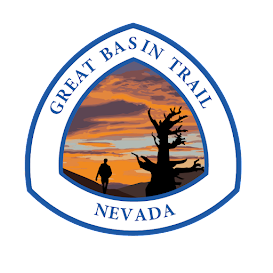 Timing and Seasons:
What makes the Great Basin Trail so cool is that it is a loop route. Since you start and finish at the same point the termini is determined by the hiker. For the same reason, the season is ultimately determined by the hiker. The loop gives one the freedom and flexibility to hike the Great Basin Trail. But, one should not be flippant in choosing a start point or a start date.
The hiker should be well-versed in the Great Basin, the terrain, the highways and dirt roads, the exposure and isolation, and the preparedness of how often the weather changes. One important thing of note, is that the loop of the Great Basin Trail is bifurcated by the well-traveled Highway 6. Below, I will give my suggestion and recommendation for a springtime and autumn start.
Although I really believe one can hike in the shoulder seasons, like summer and winter, I think the hiker should be highly experienced in navigation and should be incredibly prepared for either dry and hot conditions in the summer in the basins in the southern portion of the loop, as well as to be prepared for snowy and cold conditions in the winter in the northern portion of the loop. Lastly, one can cherry pick the sections during the optimal timeframe to hike portions of the route or one can hike the hemispheres of the route during the optimal time frame. In regards to the latter point, the southern hemisphere would be very comfortable in March and April, while the northern hemisphere is quite comfortable in July.

In summation, a hiker can be very creative in choosing the starting and ending points of the Great Basin Trail. A reminder in planning is that wind is a constant companion and the hiker is completely and utterly exposed in the elements on the majority of the GBT, regardless of the season one chooses to hike in. The southern portion of the loop is the most remote while being the hottest and driest. A good frame of location reference of the southern portion is from points GBNP to Tonopah. Towns are few and far between and this portion lives just north of Area 51. So, not only are the nighttime skies incredibly dark, this means hardly any souls venture into the area unless they are driving through the Great Basin expanse.

The northern portion is unique in that each of the higher ranges are vastly different from each other. In a way, each range is a sky island within a illusory sea of the Great Basin. One can break up the sky islands in large sections. The Monitor and Toquima Ranges are within the rain shadow of the Toiyabe and receive less snow, although all 3 ranges are severely exposed in the higher summits. The Diamond Range lives in isolation and is situated centrally within the loop of the GBT. The Ruby's can be broken up into 3 sub-sections. The Southern Ruby is stark and dry as compared to the lush and green East Humboldt Range, while the Ruby Crest is High Sierra-esque. Lastly, the High Schells are very tall and windswept while across the basin of Spring Valley the hiker attains the Colorado-esque 12,000 foot elevation near Mt. Moriah and Wheeler Peak. 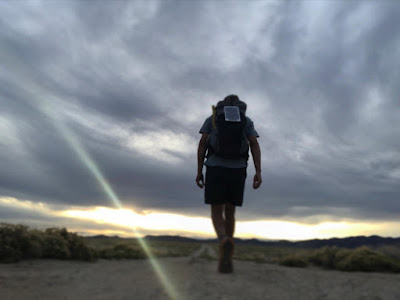 Examples Getting To/From the GBT:
Of course, the easiest way to start is to have someone support you, help you cache, and then drop you off at your particular starting point, like I had for me. The other easiest way is to utilize two cars and have a hiking partner where having the flexibility of two cars the pair can use the cars as transportation, cache points, etc. The point of these examples is to show the do-ability of accessing the GBT, as well as the versatility of hiking in a loop. The roads are either highways or really good gravel roads that access or intersect remote areas for either water or food caching or having a meet-up point. Try and be creative with your starting point that benefits your hiking experience and timeframe!
Weather:
Weather in the Great Basin can be tumultuous, burly, unpredictable, harsh, pleasant, sunny, warm, hot, frigid, and incredibly dry. The flora mimics the harshness of the climate too. Bristlecone pines literally lie on the ground and in the opposite direction from where the prevailing winds gust. Salty shrubs poke up from alkaline flats. Limber and pinyon pines and juniper twist and contort as if shaped by an invisible hand of wind. Nothing but sagebrush grows in most of the basins as if life is too hard to dwell in such a barren environment.
I have lived in Montana and Colorado over the years and the saying is the same: wait 5 minutes for the weather to change. Nothing is more truer than that notion in Nevada and the Great Basin as compared to those states. The weather feels more unpredictable and changes more drastically. One morning may be brittle and cold while the afternoon sweltering and no shade. One day temps may not rise above freezing with the wind biting through your skin; the next sunny skies and back up to 80 degrees. A ridge crest may be frigid while a basin some 5,000ft and less than 5 miles below may be toasty.
Partly the reason for this harshness and unforgiving quality is the severely exposed landscape and the intense dryness of the Great Basin. To the west, the Sierra Nevada provides a shade and soaks up most of the precipitation. As the roving storm cells and systems move across the Great Basin eastward water is evaporated from the basin floors making the giant lake beds dry. Eventually, those storm systems slam into the Rocky Mountains to deposit snow and rain. The Great Basin is so large, so immense, that the weather patterns dip coldly from the north, swelter from the monsoonal flow of the Gulf of California, and blow in from the Tahoe area. I will not wow you with data or graphs or charts. I can vouch from experience how dramatically harsh and unpredictable the weather and climate is in the Great Basin, of which within the Great Basin Trail you will have indulged in thorough exposure at bay to the open skies and vast and empty terrain. 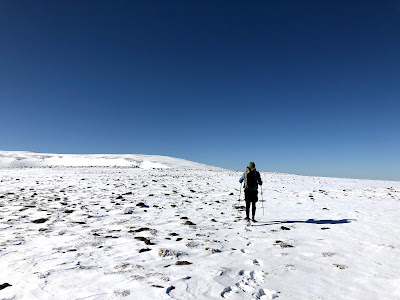 I guarantee you, you will not ever feel so small in an ecoregion. The Great Basin is so hard to conceive of how big the area and region is. The landscape is dramatic and I have seen nor experienced any other area like it other than the Altiplano in Bolivia, an area that lies beneath the Andes. One can see a storm move in from miles away. In fact, one can dodge a storm on foot from miles away and time the dodging of the curtain of water falling from the sky.
The wind is palpable in the form of the clouds towering above or smothering across the Great Basin. You can visibly eyeball the direction of the wind and brace for impact. Sometimes the wind is so great that one is deceived into thinking a storm is suddenly upon them with the darkening of the bright sky only to have sand pelt the skin and backpack. There is no cover out here, no tree big enough to hide under, no gully deep enough to sink into, no hill tall enough to barricade against. You are at the will of the weather gods out here in the Great Basin.

In all realness behind my hyped-up drivel, the experiencer should be ready for sudden changes and be prepared to potentially sit out a day on trail to let an intense snow storm pass through. One should be ready to wait a sunny day in town to let the snow blow off the ridges and the dry lake beds to bake once again and harden under the intense sun.
Part of the preparedness is the mental part of what to expect to encounter. The wind will hurt, the cold will sting, dryness will crack your skin, and the sun will chafe. The biggest research you can do is to stay on top of checking the weather out there, as well as to monitor snow levels in the Sierra for the Winter and how the Spring storms are frequenting the Rockies. Lastly, which will lead to the next section, test your gear, check your gear, and even bring a couple extra items for the hike, or at least have a plan to either have gear shipped or cached ahead, or to have someone send you appropriate gear as necessary. Because the GBT is so remote, finding adequate gear in the small towns may not be an option. To think you will not get weather out here in the Great Basin one will be sadly mistaken and uncomfortable. 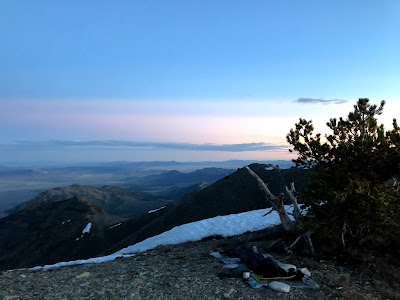 As a sample, I will do a brief gear list, mainly my Big 3 items and clothing layers, after some brief detail of what to bring and what to expect. Like I said, one is benefited by having appropriate gear for changing weather and sections by having gear shipped or cached ahead.
Overall, I suggest leaning on supplying yourself with gear that is on the warmer side. So much of the Great Basin is exposed. So, by that notion, temperatures are naturally colder due to wind chill. By that, since the southern portion is much warmer having an extra layer or even a warmer quilt or sleeping bag waiting in Tonopah may prove to be advantageous as you walk in a clockwise direction. By the same notion, to an extent, if hiking counterclockwise having warmer gear from the get-go is a necessity.
Since Highway 6 is the bisecting line of the GBT be aware of the ecoregion's changes within, above and below that line. The highest mountain ranges live in the northern portion of the loop, so, the basins are inherently higher in elevation and the weather generally cooler. You will frequently be at higher elevations in those sections, as well. In the southern portion I cowboy-camped for nearly 3 straight weeks. I did not set up my tarp shelter until I got to the Alta Toquima in late May where I was camped at nearly 10,000ft and in much colder temperatures than I had experienced up to that point in the GBT. 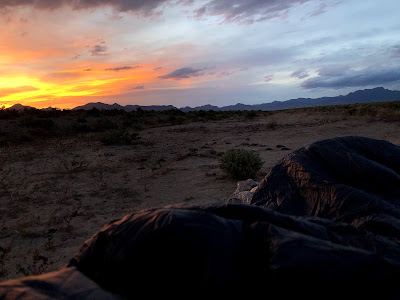 A hiker must be self-sufficient as recommended because the towns do not have the type of gear that an experienced backpacker may covet, including small items like gloves and ponchos. Besides Ely, Tonopah, Eureka, Pioche, and Wells the next most opportune town that is reasonably close to trail is Elko. You could reasonably find gear there in Elko, but in most other towns you are mainly going to be selecting from cheap hunting gear. 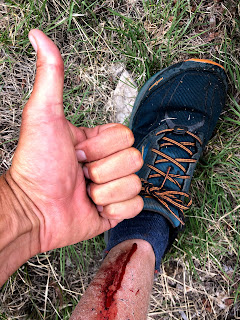 A hiker may not be concerned as much with comfort if one over-prepares for cold and wind. But, finding a balance between warm, durable and lightweight gear will be beneficial for the rigors of the GBT. When the trail or cross country gets rugged, let me tell you, the trail gets really rugged. These brief yet intense overgrown paths and terrain mainly occur in the canyons. Much of the ranges are accessible from a couple main trailheads. Couple that with less sheepherding than in years past, canyons that once held trails are now completely overgrown by willows or wild rose bushes. So, what I am getting, ensure your gear is at or near bombproof as the bushwhacking in those brief yet intense areas is inevitable. 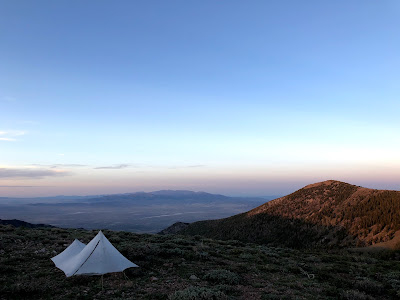