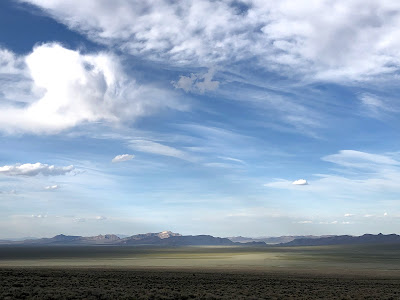 Water: (GBT Water Chart linked below)
Water is more plentiful that one might believe on the Great Basin Trail. Three of the longest waterless stretches of the GBT are in the southern section, ~41m, ~30m, and ~25m respectively. The southern half is very much drier than the northern half, although each of those 3 waterless stretches can be broken up by a strategic water cache at highway crossing. The longest stretches of the northern half are ~50m and ~25m. That ~50m stretch is fortunately from Wells, NV, in which one should have their belly satiated, southward to the reliable Upper Boone Springs. The latter ~25m waterless stretch has the reliable Corta Spring near Overland Pass in the Diamond Range or a cache can be plotted on the good roads of Huntington Valley. 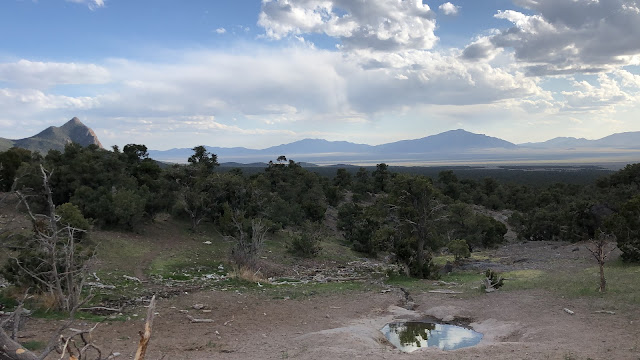 In total, I found roughly 180 potential water sources and at least 8 cache points. The largest waterless stretches in the Great Basin Trail. A multitude of types of water sources exist on the Great Basin Trail including springs, creeks, lakes and ponds, corrals and troughs and tanks, wells, the occasional wildlife guzzler, and ephemeral potholes and puddles. Of those sources the springs are probably the main resource for water in which the flow can go from a tiny trickle, slow drops, seepage to relinquishing a small creek flow. Even which of those springs some are piped and either free-flowing or flowing into various catchments such as tanks or troughs. 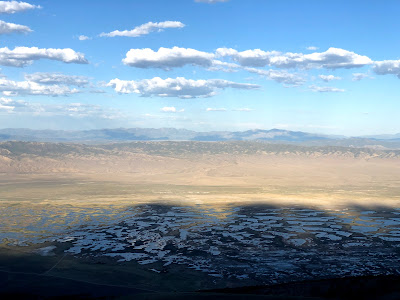 As much as the Great Basin is known for its dryness and unpredictability in weather, creeks inhibit most of the highest ranges and are a striking to the thirsty eyesight and startling the arid ear. The first running creek I encountered in the Quinn Canyon Range had me entranced for a long lunch break and nap at the sound of plenty of crystal clear flowing water. In the largest ranges, such as the Toiyabe, Monitor, and Ruby, creeks are a vital part of the ecoregion and are mainly spring fed in the highest elevations as well as flowing from springtime snowmelt. 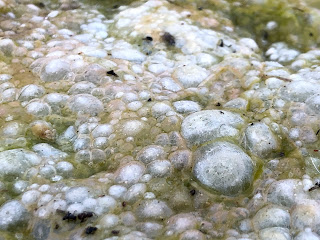 Much of the water encountered is in fair to clear condition. Because human impact is scarce and much of the horse and cattle sources, such as springs and corrals, are maintained by the BLM or ranchers much of the sources look clean or clear. However, despite how one's confidence may appear from one's isolation in the Great Basin one must always be aware of waterborne illnesses and utilize water sanitation treatment when consuming these sources. Also, taking care and maintaining proper LNT ethics around these sources are of the utmost importance. Please ensure these ethics occur as well as maintaining a proper safety protocol being so remote and far away from rescue and help. Myriad of wildlife utilize these sources such as wild horses, cattle, antelope, elk, deer, mountain lion, burros, coyotes, tons of birds, among other little critters out in the Great Basin. 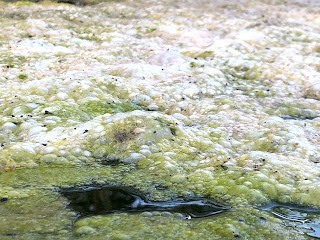 In the GBT map set and on the GPS file, waypoints and water information will be notated for the hiker. I do not think I will have a Water Report until enough hikers attempt the GBT. That being said, I will have notes as to the reliability and conditions of the source. As a precaution, one must not be too reliant on reported conditions as sources may change, dry up, become non-functional for range use, or become fouled. Lastly, not all water sources are potable. Occasional thermal pools or springs are encountered. I did not utilize any of these potential precarious sources and I believe it is sufficient to say one can hike the GBT without drinking any of these questionable sources. That being said, over prepare on this route to ensure hydration and water availability.
GBT Water Chart 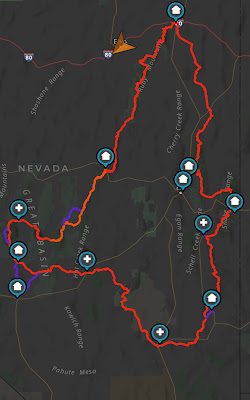 Because the Great Basin Trail is a loop strategy for resupplying and caching is favorable. Because the Great Basin Trail is contained completely in Nevada and within the Great Basin section stretches between actual towns are great in distance, especially with the rigors of the walking and the difficulty in navigation. Depending on when and where you start in the Great Basin Trail's loop you can split up the longer sections with more manageable stretches. The Great Basin is very temperamental in weather conditions and because the nature of the terrain is so exposed one may be delayed in attaining achievable miles towards a section end. Often time storms may limit one from traversing a ridge or crest, as well as crossing a basin during lightning storms let alone trying to cross a basin when the floor is saturated which may pose a 'sticky' situation with the clingy mud. To briefly sum up, the caches will be advantageous if one has to hole up a day or so on route.

Within the loop of the GBT major yet isolated highways transect the route. Highways 6, 50, and 93 are the major and most useful to cache. These caches also promote one in being self-sufficient and not to rely on hitchhiking. To say the least, hitchhiking in the remote Great Basin may be time-stretching and test your limits in patience. Also, the main dirt roads in the basins, which mainly run south to north, are maintained regularly by the counties in which those roads reside in. Usually one can stash a bucket or bury an Ursack at a summit between two valleys or simply an innocuous highway or dirt road crossing. Lastly, driving around the loop and caching food gets one so familiar with such an isolated route. This helps in not only familiarity of the route but to become aware of one's bailout options, which are so important in such a remote route.
Buck-30 has an excellent article about caching food and water in the desert. He gives tips, perspective, and strategy. Follow this link:
https://www.postholer.com/journal/Desert-Trail/2019/buck30/2019-11-22/Water-and-Food-Caching/64842 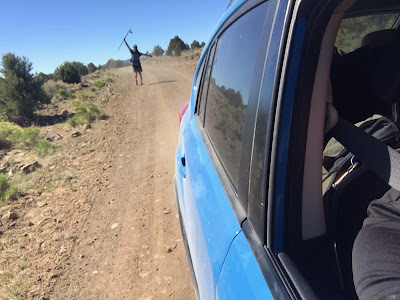 The longest stretch between towns that are relatively close to or on trail is from Pioche to Carvers at roughly 305m. Although I did not utilize Carvers as a main resupply option, this is reasonably the next closest town from Pioche that has sufficient amenities. I utilized Tonopah because I had an arranged ride from the GBT and because Tonopah would have more amenities than most any other town on trail other than Ely. In between those two resupply towns one may have an opportunity to hitchhike to Tonopah twice and have at least 4-5 caching opportunities. From my utilized itinerary I had 3 sections over 185m between resupply with the longest estimated at 210m. For each of those sections I utilized caches that I placed or had some help from friends that ventured out to central Nevada. Two sections, from the Tonopah Cache on Highway 364 to Eureka (~185m) and the section from Eureka to Wells (~210m), are by far the toughest stretches of the GBT. Not only is the terrain incredibly challenging because you are frequently up high on a crest but you are immersed in some of the most remote country in the lower 48. So, one needs to have ample food for the miles-per-day average, enough water carrying capacity, and have a little luck with the weather. Detours are available to avoid any inclement weather but missing the range misses the highlights of the GBT. 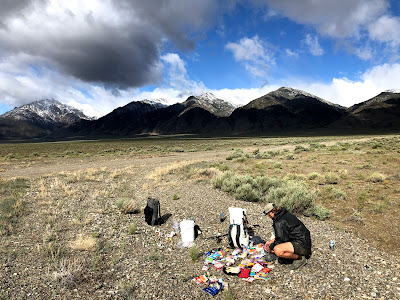 Overall, I highly recommend utilizing cache points for both food and water, but mainly food. I have labeled the cache points in the GBT map set and on the GPS file. I recommend also to use the Nevada Benchmark Atlas to have an overview of the highway and dirt road system within central Nevada. The GBT does not have very many towns but of the towns I used I really liked the friendliness and the walking-thru of Eureka the most. Wells has the basic essentials for a truck stop town off Interstate 80. Ely is a decent sized town with all amenities that is spitting distance from McGill, which is where one could only utilize the USPS. Other small towns exist off the GBT, but Just remember these towns are incredibly small. Caliente, Hiko, Carvers, McGill, and Baker are ones a hiker must be aware of for bailout options or respite from a storm.
GBT Resupply Chart

Sample GBT Itinerary:
note*** this is my utilized itinerary*** 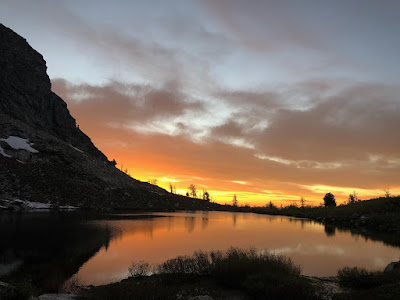 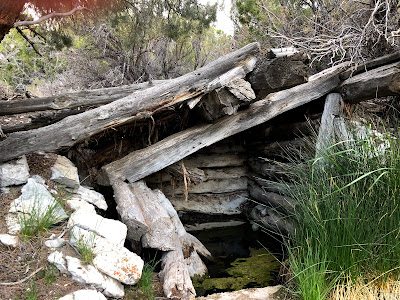 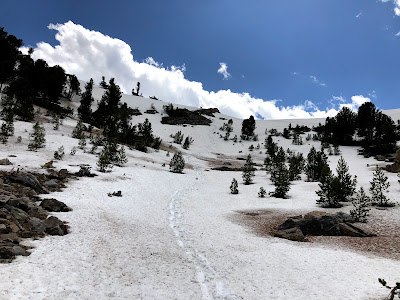 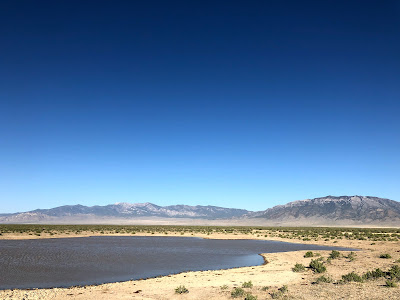 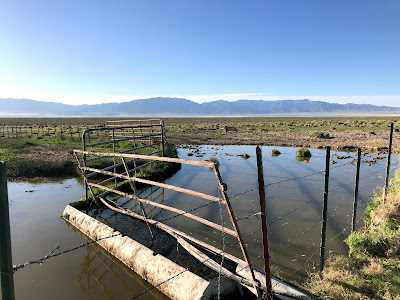