It is the push back I receive that empowers me to push, to reason out my actions of action, to determine the flexibility of heart rather than the rigidity of it, for if I became intolerant to flexibility I am not sure how capable I am in willing to take everything. In turn, I am not sure how I can expect patience in return. This pushing back is me listening, spouting off or exerting further, the echo of response.

My feet hurt at the end of today. A symbiotic push and push back relationship in fine example. My drive pushes and my feet push back to let me know pace, interpretation, knowledge of my surroundings, understanding of my body, gauging my mind, and, in this case this day, the power of the wind. Out of no where the wind blew in. Most of the morning I could see a massive dust cloud billow up over the divide so many miles away west. At first, I thought a fire had been brewing but when that first push of wind hit, I knew what that discoloration in the faraway sky was. Soon, the wind became deafening, the salar acting as a wind tunnel, no obstruction, no push back other than a tall and lanky walker in the empty expanse. I leaned in and flexed with the wind, danced with it for a bit, while Isla Incahuasi became ever closer, the mirage becoming an ultimate reality. 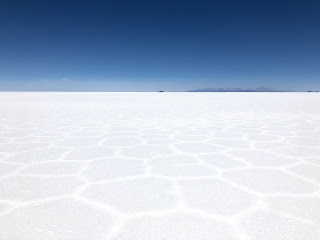 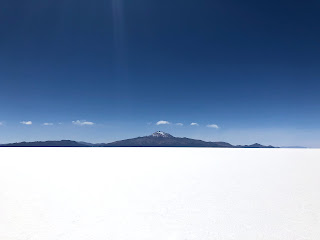 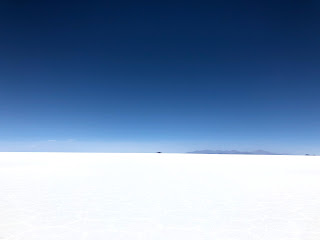 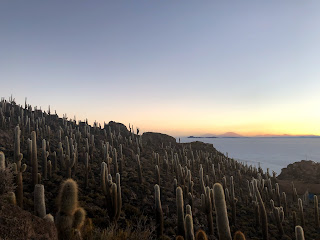 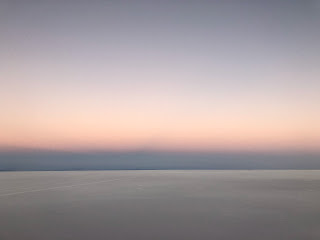 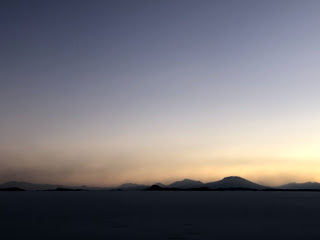 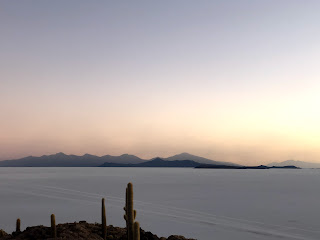 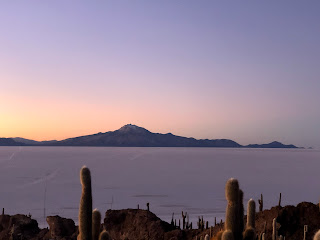 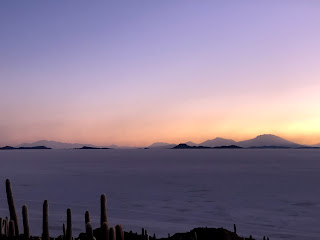 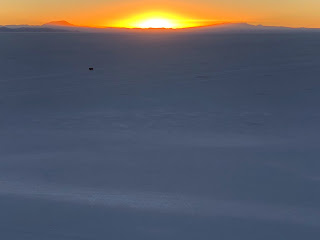 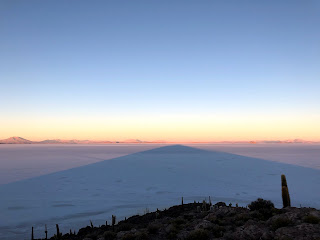 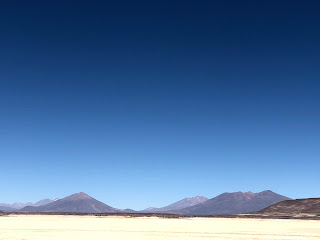 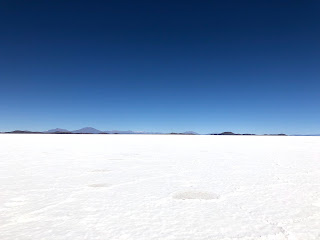 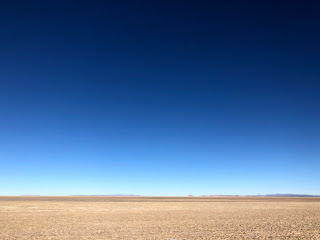 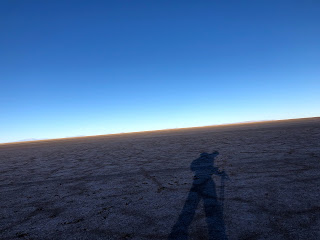 Many vehicles stopped by to see if I was okay, including the Incahuasi park staff who drove from the island about 6m out to lend their assistance. I refused and thanked them, and embraced the wind, the pushing back. Is it some game I am always playing? Feeling it out, an act of self preservation, or getting to know something so I can help others? I feel it to be a mix of both. I sit here in a cafe on the touristy island, only me and the waiter, a young dude from Tahua, the town in which I walked from that morning, drinking coffee, trying to speak more Spanish than I have done yet, while all the other people, mainly tourists, are taking photos with tiny dinosaurs out on the playa doing what you are supposed to do, to be like everyone else. But there’s value in pushing back, let alone pushing. Balance, earnesty, genuineness, flexibility, compassion, tolerance, endurance, among others. A puppy nibbles on my sock on the ankle while pouncing on my wiggling toes through my shoes, playfully jumping up on the side of my leg, growling and practicing, seeing what she can and cannot get away with. The waiter laughs. Then, the puppy pees under the bar on the tiles. Only I see it. The coffee goes down sweetly. And I think about patience. Maybe that’s what I need. Both given and in return. A secret underlying tone of endurance, of pushing. I also think of balance, between the two forces, between my feet and my head, my body and the wind, the true introvert and needing to be extroverted, the puppy’s tiny teeth and my sock, and the sun collapsing onto the salar, a colliding brightness, the balance that becomes indistinguishable and one at the same time, the push and the push back creating a harmonious synchronization.

After all the tourists left I climbed the small peak on Isla Incahuasi. I had the top to myself in the middle of an endless sea of salt. All the colors imagined on a 360^ panorama of a day ending and a night beginning, all right there in the palm of my hand. A giant scale in perpetual balance, quite simply put: Mother Nature. I felt the wind knife through my skin, like the last rays of light shimmering through the large spines of the giant cactus on the island. Everything began to blur, and sleep entered my mind. Another day, walking.

The park staff put me up in a room of sorts, like a meeting room. The chairs were stacked, the floor creaked, and parts of the walls were made of the sharp limestone rock covering the island. A bay window overlooked the western half of the Salar de Uyuni. Night had sunk to land and the sea of white turned black, the night had engulfed the brightness. The camp killed the lights and with the moon not yet risen utter blackness blanketed the moonscape. I could hear the window panes rattle from the wind. But, just like that it stopped. In an instant, something so incessant and fierce stopped. Like the wind got tired, exhausted. Then, it quit. I felt to be on a precipice of an abyss, like I was looking down on the stars. Even Venus, so bright and vibrantly plump with twinkling light, looked to be just on the seam of the horizon, right on top of the playa, almost a twin glow tantalizing itself from its mirrored reflection. I had never seen anything like that before. All the tourists had left hours before and were snug in some small town on the shores of the playa. And I had a front row seat, on an island, watching the best entertainment one could ask.

I left early the next day after climbing the small peak to watch the sunrise. The knobby peak had a pyramidal shadow extending so far to the west into the salar. Morning came and went with the sun dominating the day with the punishment of light. However, the sunlight was different this day. More bluer, an almost crystal blue. The sun over my shoulder, the cool wind at my back, and the salar seemed different. In some places, the salt had a frothy yellow tint to the tops of the tiles, while the blue of the sky merged with the endless white to create a wavy and watery horizon. The mirage extended for miles in all directions. Soon, Isla Incahuasi sank into the watery mirage and vanished from my line of sight.

From my sheltered camp behind a sand dune I could see the lights of Uyuni, an outpost about 50m due east. The lights flickered like Las Vegas in the dark desert, albeit way smaller. Mud flats, both dried and squishy, and sand dunes followed the next day, after a chilly morning. I eventually ambled in into the railroad outpost of Julaca. I really expected nothing to find here, and as I passed a dusty and hardscrabble cemetery, I thought the trend would hold up. Most of the small towns I had passed in the past couple days shops were either closed or places weren’t serving any food. I managed to scrounge up a meager resupply but I couldn’t suffice the constant hunger pang I had been feeling. To be honest, the hunger made me a tad sluggish. To my luck, I chose the right street to enter the outpost. A jovial senora greeted me after her young son spotted me and ran to tell her. Her store was by far the best yet! I must’ve looked rather famished and homely looking because the kid asked me if I wanted potatoes and eggs. I had heard his mother tell him to ask me. I wavered a bit playing a bit shy. In a dry and hoarse voice I finally relented and agreed to some grub. Quick like, the senorita brought out a bowl of eggs, purple potatoes, and shell pasta. I slurped the delicious meal up as I guzzled a soda, my first cooked meal in a while. At least the occasion felt like it.

Afterwards, I brought the bowl back into the store. She refused to take any money from me for the meal. I felt so grateful for the meal I tried to give her some money, but she wouldn’t have it. My belly felt great, and so did my heart. Hikers say the ‘trail provides,’ but I don’t always think that is true. That saying reminds me of adaptation and opportunity used in a way that comes across almost like a phrase of self-entitlement. Sure, random and amazingly fortuitous stuff happens. What I mainly think it all is is that ‘people provide.’ Damn good people provide damn good memories. And that memory is enhanced while out on a trail or route, especially when convenience is unfamiliar.

Sometimes I forget where I am at. And I have to remind myself. Normally, I am on guard, aware of my surroundings, in the moment. However, there are times when I am just ‘outside.’ It doesn’t matter where I am at: I am here. I tend to be lonesome or individual. Yet, people bring me back. I watched her plump cheeks perk up as she smiled her toothy grin as she handed me the bowl of food. Her store was immaculate, the cleanest I had seen. The trash can, freshly dumped, smelled like stale beer. Along the side alley sewage puddled up in a gurgling cement containment. All the jeep tours go through here, drinking beer and using this outpost as a pit stop. Yet, the shade soothes my sunburnt nose and cheeks, her hospitality fresh and comfortable. Her son had eager eyes and had an air about him of wanting to help out. He darted about running small tasks without objection. He would throw a quick glance at me and flash a smile. He looked just like his father. I tilted my head back to replenish my fluids. I was cruddy, salt-stained, particularly crusty. The wind blew up dust and I heard school kids laughing from behind an adobe wall. A game must be being played that brought the open-air silence to life. I thought: a smile an inheritance, and laughter is a gift. I came back to here while here and found myself present. Sometimes I forget where I am at. Then, unknowingly even to me, I left as quick as I came in, back to the ‘outside.’

Posted by dirtmonger at 4:30 AM