While waiting for the minibus to leave I saw a homeless man among the hordes of people. Most were waiting for a ride or selling food or goods. He was watching everyone load up on the minibuses, observing the hubbub of society going on right in front of him. His feet calloused and hardened, his face so dark and sun-scarred, his eyes squinting from constantly being outside, his wool tacky sweater, a rough blanket, his hair just slightly overgrown; I couldn’t tell by the deep stare on his face if something was wrong with him. Nonetheless, I could see his pain, feel his pain. I knew that look. I felt to be looking into the soul of my father. It is what is inside of me. Why wouldn’t he just wander, roam the earth? Why hold such guilt, the same guilt that ails me, that we both lament over? If he was to struggle to fit, or torture himself with pleasing people, or crack his bones to understand that which he could never understand. Some say we follow through or live a life our parents wanted to but didn’t. I think of my father, homeless for 20 years, living part of the time under a stairwell at the back end of the church, even a corrugated pipe under a highway. Here I am, trying to walk the world, to explore faraway locales and exotic cultures, but I cannot help but wonder: why didn’t he follow his instinctive path, his way the way it was supposed to be? I am not doing this for him, nonetheless, he is a part of me. Nor am I seeking an answer. It’s the curiosity that compels me, the will deep inside me, the urge to go. Maybe he’s prodding me from some recess deep inside, forging a path, a wavelength of connection, a continuance of destiny to complete the journey, to be shaped by the world.

Then, the man would occasionally smile or grin, even with his eyes, as he observed the chaos and absurdity of humanity. He wasn’t crazed or lost, simply amused. Then, he ducked his head under his shoddy blanket, gone from the world, abandonment by cover, not by walking away, or drugs or alcohol, or a mental disease. In truth, I really don’t know why he went under that ratty blanket. Neither will I ever know why my dad lived in a stairwell. 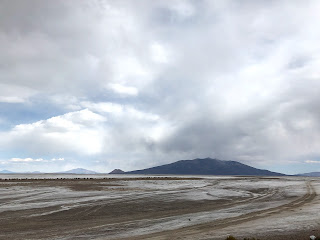 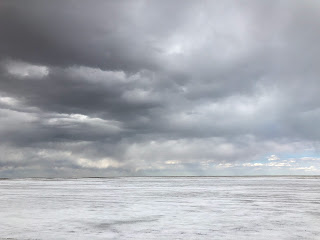 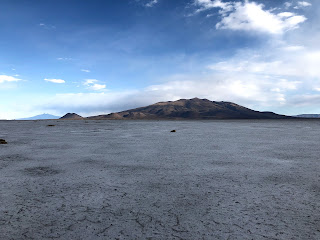 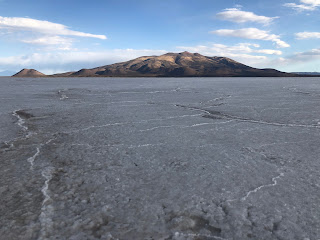 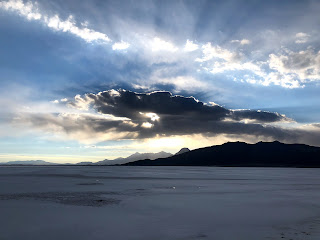 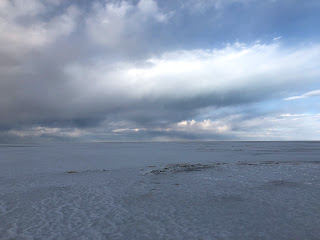 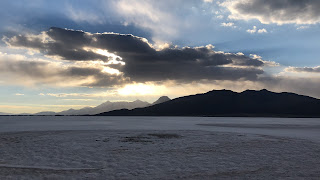 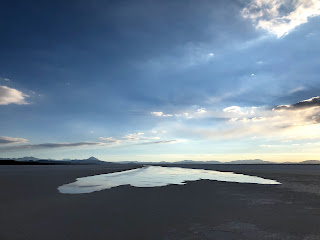 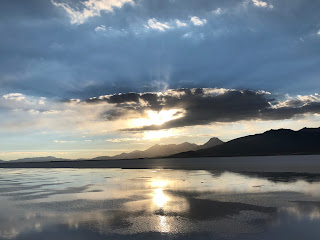 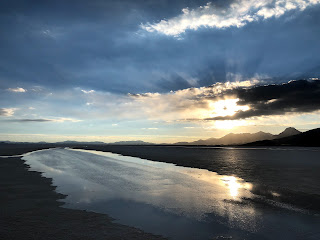 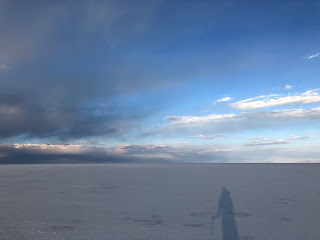 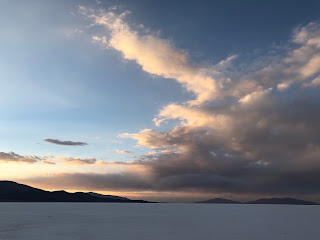 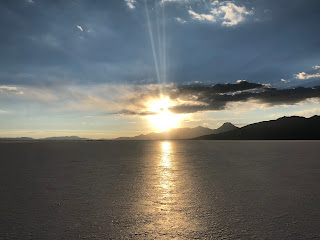 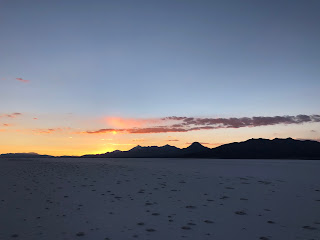 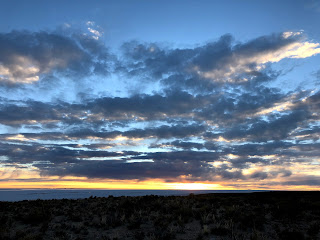 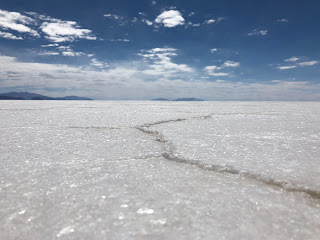 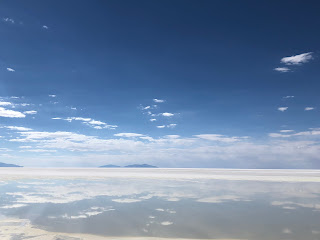 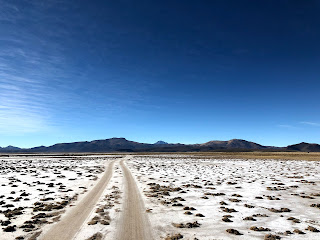 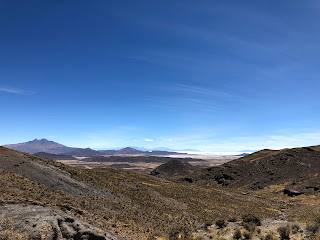 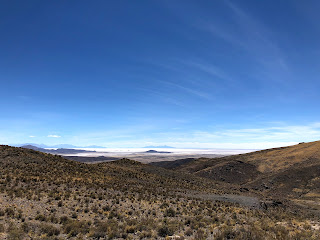 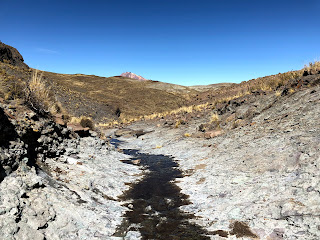 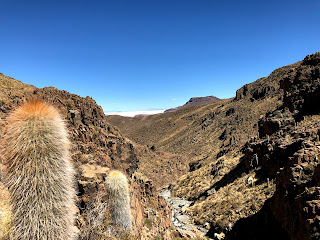 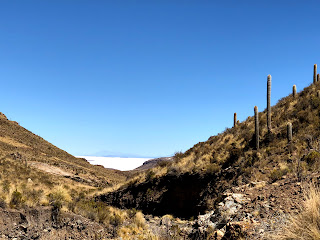 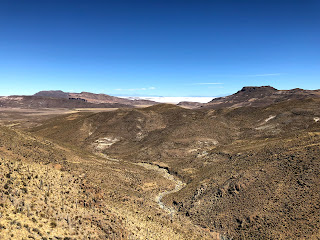 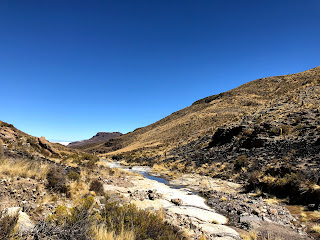 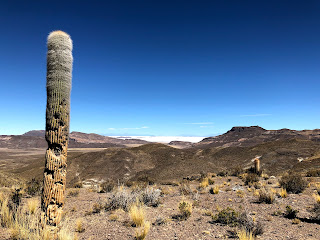 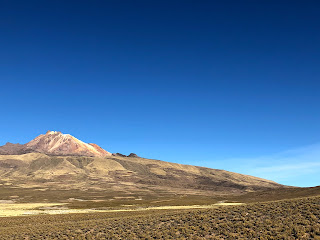 Sometimes I am hit with these moments. Unexpectedly they appear, as if something some deep down inside that’s welled up is ready to flow. Then, it happens. I come to terms all over again with my wandering, my morbid thoughts of abandonment and vagabonding. And, I feel content, humble, and not as much as proud of a homeless man that once was or once feebly tried, rather I am proud of a fleeting and wandering soul. Going no where in particular, no where in mind. Simply driven by instinct, the highway of a heart, by the gut of the land. I guess I just feel lucky that I haven’t lost it.

The grand emptiness of the Salar de Coipasa, even the small arm I was crossing in the late afternoon and early evening. The incredible emptiness and the brilliant white, the wind howling non-stop and in two areas two slivers of streams being spread out and pushed by the wind moved eastward over the crust of salt, puddling up a dramatic reflection of the sky above and the sun setting behind the towering volcanoes, although ripples from the wind the mirrored earth blurred a portal losing your chance to do whatever you wanted to do all over again; the crunch of the salt crust, maybe a few inches thick, my shoes would splash and kick up some brackish water spouting through a thinner layer of salt, huge tiles of brilliant white, crystals tantalizing my vision from a sun-glare; an immense pseudo-snow expanse, wondrous to an desert traveler resembling an arctic zone, oozing clouds almost dropping to a seam of oneness with the vast playa. I spent the last hour or two of the day gazing at the snow-dome panorama while playfully looking at my shadow lankily mimicking me in the salt glow goofily resembling a marionette, the sun and the salt orchestrating it all. To this wanderer, this is the never-ending I crave, I yearn for. This seemingly unending horizon that which I could just walk into forever. This is the contrary of a morbid thought. This is happiness. A dream. A blur of infinity. Chasing the end of nothing. This is what I feel lucky about: That I haven’t lost it.

Walking across the Salar de Coipasa, roughly 25m, the radiant glow of white, the projecting heat shimmering in the horizon, the blurry discernment of the horizon and the size of the surrounding mountains, the consternation of distance and how one second something seems close, then a shift in a moving cloud or change in the wind patterns and something seems so far away; this was my mesmerization for hours. Sometimes I came upon splattered bird shit that distorted the white radiancy but caused me to stop and inspect the shit. The splatter had a kaleidoscope of shape that sparkled under caked salt. Sitting down at lunch in the middle of nothing, the salty water pooling up in tiny puddles around me, the white staining of my hands and my gear, the salt encompassed me, almost melting me into the mass. All this walking and I haven’t lost it.

Early the next morning I walked into the tiny village of Luca. To my embarrassment, I stumbled into a woman or a little girl going to the bathroom on three occasions. I say this with embarrassment because I literally stumbled upon them in the process. I really don’t care about public urination or defecation in the sticks. I mean, most folks use discretion; I’m cool with it. But to stumble upon the gals around 730am as a tall, bearded lonesome walker, I sure as heck didn’t want to scare anybody. So, I paid my obsequious ‘Buen Dia,’ grabbed some water, and jetted out of town stealthily with my tail between my legs, just trying to get lost.

I had been dead set on a salt hotel since last summer. And this morning was no different. So, I veered my course a bit and crossed the Cordillera Intersalar. Not a very high range, nonetheless, the range bridges the gap between the Salar de Coipasa and the Salar de Uyuni. Besides that, I stayed off any roads and navigated meandering alpaca trails and cliff bands high above the flats below. Before the cliff bands fell off into a white space I even followed a small stream down a channel worn out by glaciation and ice. Like a skateboarder I playfully weaved side to side within the chutes. Most of the day, though, I dodged ground-lying and bushy cactus that kept me at a strict focus. Atop a random pass I relished in the faraway views of the seas of salt, each sea a beckon of nothingness, the matrix of an indiscernible horizon. The cool breeze felt refreshing and I began to feel like I had traveled some considerable length so far on this traverse. To the north, some 100m in a line, Sajama Peak poked its snowcapped head out of utter whiteness.

Towards the early evening, I ran into locals walking back to their tiny village from a day of planting rows of quinoa. I asked them how far to Tahua and we conversed about what I was doing and where I had come from that day. Their faces were incredibly dusty from their day of digging and planting. My first thought at my first glance at the first dusty face: beautiful. The young man, the older woman, the young boy, and the older man all had the characteristic of a job worth doing, for the sustenance of the people. The older man began really conversing with me but I couldn’t understand him as much with the slurring gap of missing teeth. Couple that with me being a tad tired and absolutely thinking of nothing all day, and in particular no words of Spanish had come to mind, I felt a bit ashamed I couldn’t truly converse with him. In earnest, I wanted to know about their day and how that dust came to settle upon their beautiful faces. A solitary traveler consumed with nothing, words had been freed within in and forever vanished. All
I could think of were the basics. I rushed off, my heart stifled by my own drive, my stride in understanding tempered by my gait; I lost it. Into the dark knowing where I was going, the wind ate my words.
Posted by dirtmonger at 11:03 AM