I hiked out of Pagosa Springs, a much different experience than the one I had last year when I was in this small town while on a brief break from the CDT. I had tried to hitch out back up to Wolf Creek Pass. But after 4hrs and no ride I turned tail back to town. That turned out to be a blessing in disguise, not getting that ride. I met Addi, a trail angel, who swooped all of us hikers back to the trailhead. So, as I walked out of town my mouth still watered from the dinner she made the previous evening.

I chose to hike up Mill Creek Road. The West Fork Fire Complex had shut down the highway so going up this pleasant creek valley, then hitting the Little Blanco trail which would then intersect the CDT, was my only way out.

About 3m in I ran into 2 blonde mutts, brother and sister pups. They were out wandering in a pasture and barked loudly as they ran toward me. Friendly that they were, immediately they began following me. I tried to shoo them away. They were scared and hungry. I vowed not to feed them and continued walking along ignoring them.

They worked in tandem as they hunted for rodent morsels. If they found a creek they would plummet their under-carriage right into the cool waters. Occasionally, they would trot alongside me nudging their damp, cool nose against my leg. In the shade as I sat they curled up next to me; I knew they wouldn't leave me.

For 12m this went on. I wasn't aggressive in trying to get them off of me either. I just didn't want to deal with it. I figured at some point, especially if they realized they were not getting any food with me, they would leave me.

The road was filled with traffic. Suddenly, a string of cars came barreling down the dirt road. Dust clouds kicked up smothering my vision. The last car turned out to be Addi and friends returning from a day hike. They gave me fresh fruit, a soda, and carted the pups off of me. Strangely enough, Addi had pulled up just at the right time, for I was about to name the pups. 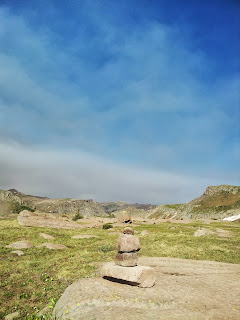 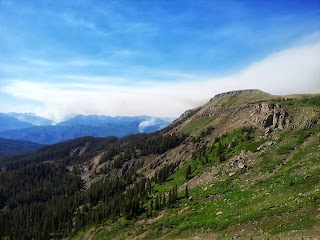 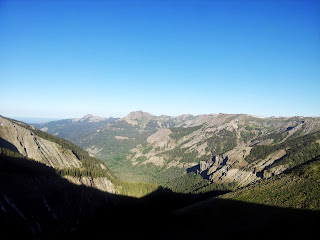 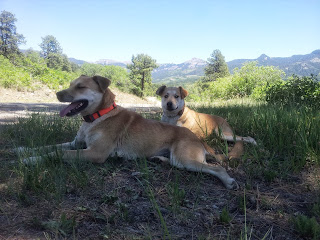 After chatting hikers up at the trailhead, I got back down to business. After a short but steep climb to Quartz Ridge I was awarded with sweeping views of jagged, large peaks nestled on the Continental Divide, the Rio Blanco drainage plunged thousands of feet below me to the south, and to the north smoke. The complex bloomed up into the atmosphere with billowing smoke, clouds towered thousands of feet into the sky. The sky turned dark while looking north. From my perch I could see how large the fire.

After trekking about 6m above treeline in alpine grasses and granite gardens, I attained the Continental Divide. Patches of snowfields littered the crest like piles of white, dingy linens, wildflowers still showed their cheery color though they were coiled up in preparation of a chilly night. Maybe it was the thin air but I had an emotional moment while gazing at the red sun rays shining off the craggy peaks. The scene was beautifully gloomy yet inspiring. I basked in the splendor of alpenglow. With the light diminishing I skittered down the Adams Fork drainage and found camp where I could hear the cascading creek. 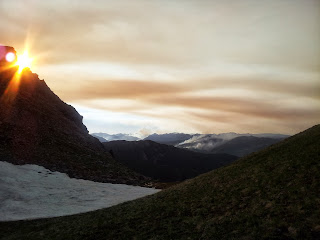 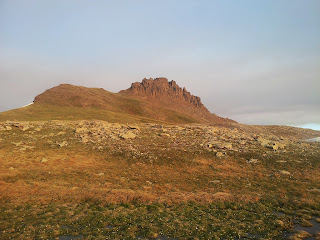 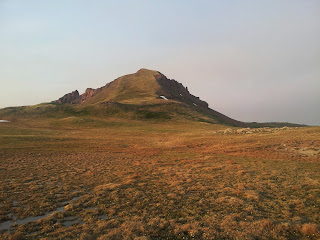 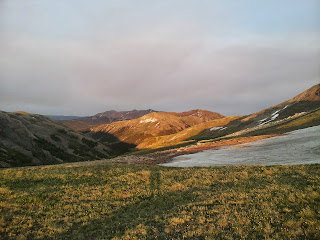 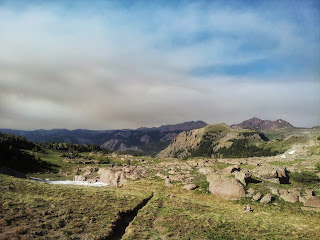 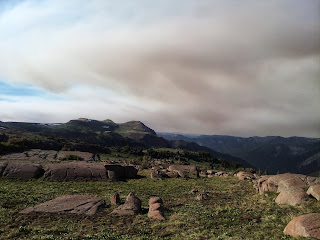 Excited and up early, I broke camp and hiked trail with the eastern horizon a fiery peach. I moved swiftly spending most of my day at 12,000ft. Only briefly would I hit elevations of 11,500ft. I marveled at the rocky scene all around me. Vistas were long and vast, deep and profound. I could see about a hundred miles in any direction at any given time.

Towards the late afternoon, a headache persisted. I became sluggish and felt a general sense of malaise. My legs felt fine but I felt like I had the onset of a flu. I drank more and more water which only made me nauseous. I realized that I needed to get lower in elevation. I began taking measures for altitude sickness.

At dinner, the sky turned black with the sun completely enveloped by wildfire smoke. At 12,000ft having no sun to warm you up plus a chilly wind, I began to shiver. I needed about 5 more miles to get to a reasonable lower elevation. I plodded on. Mountain pine bark beetles kept pelting me as they leaped and flew from the pygmy alpine pines. Clouds of mosquitoes hovered around my head. At 7pm and 32m, all between 11,500-12,500ft, I laid down on a windy saddle and snuggled up in my sleeping bag. Dozing off, with the periodic whirr of a mosquito being non-distracting, I thought of my day. I was confused, my head boomed with pain. I thought that climbing up 6,000ft the previous day didn't help anything either. I did things normally, went about my day as usual, but I forgot to add into account the high, thin altitude. But my brain could not completely wrap itself around that notion.

Sluggishly I awoke and staggered 7.5m to Cumbres Pass. From there I hitched a quick ride into New Mexico. At the Chama Post Office, still feeling like crap, I realized even more so that I was stricken with altitude sickness. I walked to a motel and slept the day away on a dark, cool room.

I had been moving too fast. I needed something to slow me down anyways... 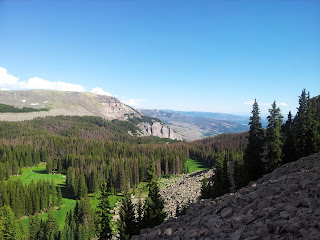 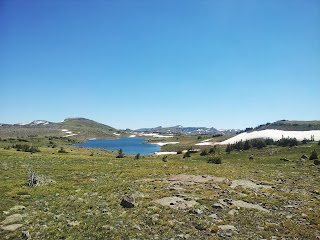 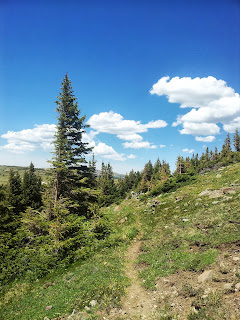 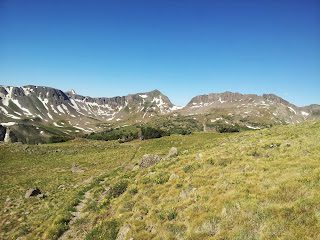 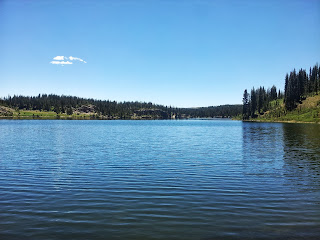 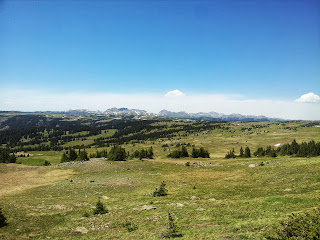 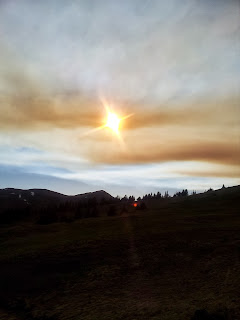 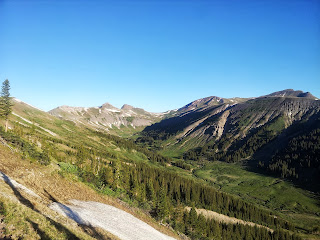 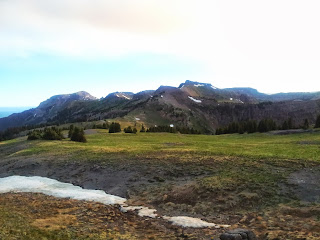 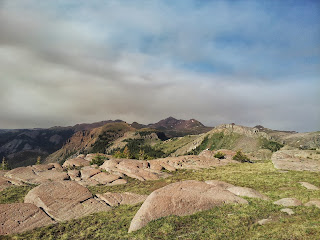 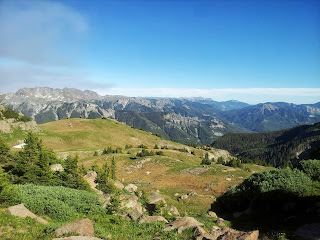 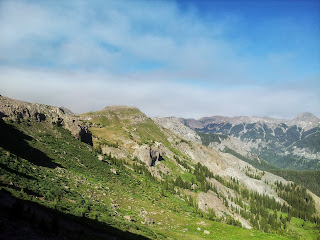 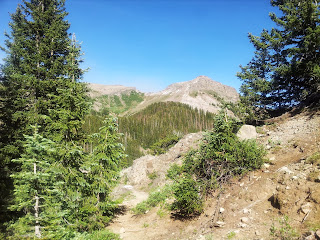 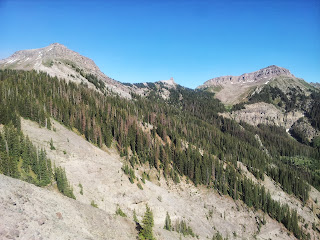 Posted by dirtmonger at 9:20 AM