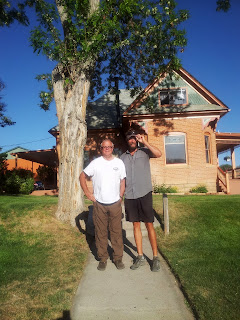 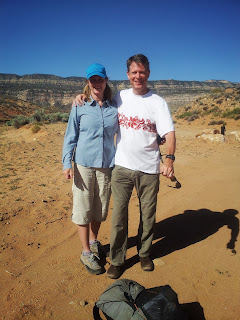 Karl and Malanda dropped me off at Hurricane Wash trailhead. Karl said, "Try not to become part of the Everett Ruess myth out here." I laughed and thought how thrilling that would be. But the better part of my brain thought, "Holy shit! He's right!"

Hurricane Wash went into a narrow passageway within a couple of miles. The canyon walls grew and became taller. They went from a white rock to a deep purple color. Dark reds became prominent. Soon, water appeared, then the wash intercepted Coyote Gulch. The walls now were hundreds of feet above me. Layered and brushed with even darker reds, striations painted the canvas of rock. I marveled up at the high walls while having a hard time walking downstream.  Overhangs and alcoves hung deep within the narrow canyon. The pocket of sky became almost non-existent and soon I was enveloped by rock.
I treaded water while mainly walking in the main creek channel. A couple of arches and a natural bridge impressed me. The bottom narrowed even more and small cascades of water swiftly moved over polished rock.
I hit the confluence of Coyote Gulch and Escalante River. Water was more abundant and knee high. The banks of the Escalante were choked with willows and tamarisk. The only place to walk was upstream, right in the middle of the river. Immediately within the canyon, Stevens Arch stuck out of place in the red scene. A bright blue sky illuminated from a massive hole in the rock on the high canyon wall. Dumbstruck, I fumbled for my camera and tried not to stumble in the river. The scene was spectacular.
I opted for Stevens Canyon, an alternate suggested by Li to avoid the slow-going river slog of the Escalante. Within minutes, I knew I made the right choice. Stevens Canyon had even taller walls and the challenge of getting around chokestones clogging up the creek motivated me. I side-stepped and straddled slick, polished chutes to wiggle my way across one section to avoid insanely deep potholes. Stacks of rock forming a pyramid led me to scale up a small bluff to avoid the next choked section. Soon, I was high on a bench, a couple of hundred feet above the floor, traversing my way across slickrock to avoid the enormous pour-offs far down below. As the day neared its end, sun rays glittered against the utterly flat walls. Everything shone in a bright glory of an inner, peaceful being from a day of punished, scorched rock; now the rock seemed to be getting lulled to sleep with passive sunshine.

In the morning, I navigated with cairns over slickrock on the Baker Trail to attain the crest of the Waterpocket Fold, an enormous, white rock escarpment stretching for miles. Opposite the Fold was the high, red rim of Grand Gulch. My goal was to get to Halls Creek situated between the 2 vastly different rock formations. From the crest I eyed Lake Powell and the Henry Mountains. I could see for hundreds of miles to the east. The Red Desert seem to swoon in its curvature within a vast world. A natural groan persisted within its belly. I could hear it, this groan...

Once in Halls Creek, Hell began. Swarms of biting flies dive-bombed the back of my legs. I walked swiftly while trying to bat and swat at the biters. I hiked off-balanced and cursed. The terrain was unforgiving too,
for the path of my route was pure, fine red sand. This went on for miles, this torture. The only time the biting flies would relinquish their fury would be when I found shade to rest. At least they gave me reprieve within my moments of much needed rest, but the while walking they were so tenacious I could hardly think straight. Even with all the distractions, I made 30m and camped in Muley Twist Canyon. I hardly remember that day, nor recall seeing anything I was pestered and abused so badly.

I packed up camp earlier than normal the next day to avoid the heat and the flies. Pissed off, I moved fast and mashed my way into and up out of Swap Canyon. The flies were gone and I deduced that the flies were prevalent near water and resided in an elevation between 3-4,000ft. My mood brighten though the temperature went upward. I hit a Badland-type bench below Tarantula Mesa and I had to navigate my way through hoodoos and sharp, craggy buttes along faint cattle trail. Grays and blacks intermingled with whites and pinks to form a smoky palette. The area lacked in vegetation and life seemed to crawl to a stop, or death.

I persisted on toughly that day. Up the Muley Creek drainage I went up a feeder canyon that brought me to a headwall of Tarantula Mesa. The mesa stood guard over the dry basin. Green junipers dazzled my eyesight, teasing me with the me potential of water. The headwall had a steep talus slope to scramble up, then a series of benches attained by some class 4 scrambling, then a final push to the flat top of the mesa. Almost 1,000ft in 1/3m!

At the top I found the road connecting this part of the Hayduke Trail with the Henry Mountains. I've longed to go to the Henrys. The range is the last to be mapped in the States and supposedly has one of the last herds of wild buffalo in the country as well. The road walk as I neared the Henrys was quite pleasant, a welcomed relief from the canyon walking and biting flies I had just endured. I took the alternate by-pass up into the Henrys and at Airplane Spring, in the late dusk of evening, I heard a garrrumph! I looked to my left and saw brown fur. I thought the clutter to be a bear but then I noticed there was a bunch of brown, clumped fur. Buffalo! About 5 of them! I hollered at them and they turned, leaped, and sprinted off. Feeling energetic by this encounter, I made another couple of miles to Penellen Pass and set up camp. 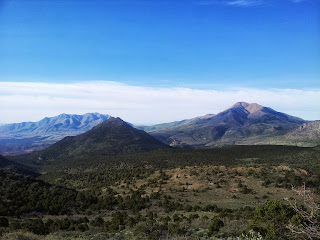 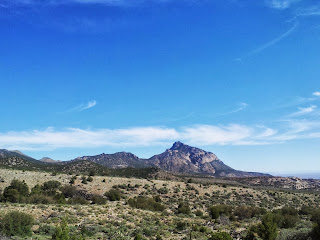 The next morning, at Copper Ridge, I gazed at the land below me. I could fathom the maze of canyons below all within a swirl of earthy colors. The colors of blue, green, gray, reds and creams made for a kaleidoscope that twisted in front of me as I moved my head or curved along the road I hiked on. Every bend revealed a different snowflake shape of the Red Desert. The sky was so big and beautiful up there, the clouds looked like the tail end of ponytails. Couple with not seeing anyone in 3 days I felt the world to be wide open, hopeful. With a big sky and dreams, and a vision wide open, a vagabond can go anywhere. Looking down in the mazes of canyons I longed to be down there exploring the labyrinth of my heart; all the ventricles explored and never-ending, I could get lost down there forever. In a brief disrupted moment, I thought of the city's mazes and people caught up in the rat race only being what other make them to be. There is so much of your heart and self in the natural world to explore without dead-ending into alley ways or edifices. I felt I could live in a city once again, but only for a bit. I need this... 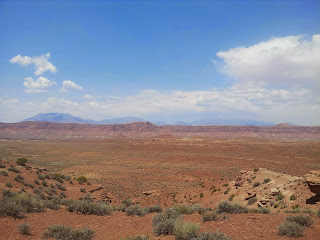 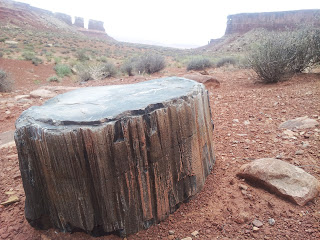 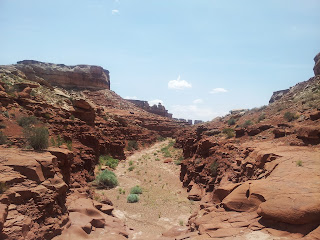 The canyons below became more obvious the more I went down. I could see the La Sals near Moab, basically the eastern terminus of the Hayduke Trail. I went down the mouth of Poison Springs Canyon which eventually became a huge canyon with an immense wide corridor and tall walls. It was wonderful until the flies came back. I uprooted 2 willow swatches to bat away the dive-bombers. I flailed the swatches like I was trying to fly. But the terrain was easy to walk upon. So, I flailed even more consistently and made it difficult for the flies to get after me. This went on for many miles and many hours. But it worked!

I slept on the banks of the Dirty Devil River that night, soundly as can be.


In the morning, I got a quick move on in hopes of getting to Hite Marina's store before they closed. I slogged 6 miles through the pesky Dirty Devil. This canyon seemed so different and independent of all the canyons I had walked. Quicksand became a concern and the siltiness of the water was hard to force down in swallows. But the walls and corridor drew me in a trance. Before I knew it I hit Fiddler Cove Canyon and began my ascension out of the bottom. From the rim, I stared at a massive spire jutting straight up from the Earth. The spire looked to have a clenched fist on top of an arm. To me it signified stubbornness and defiance, that nothing will deter me from completing these canyons. 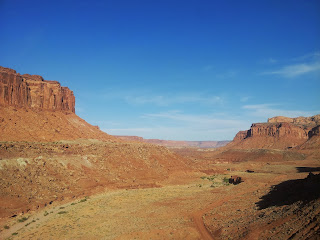 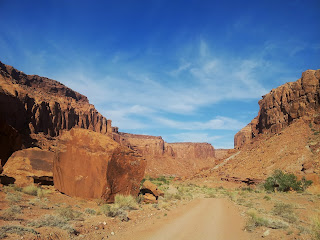 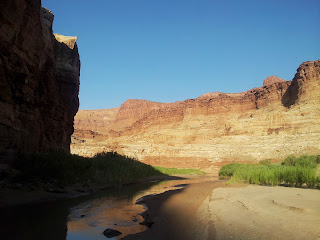 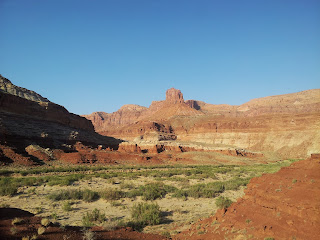 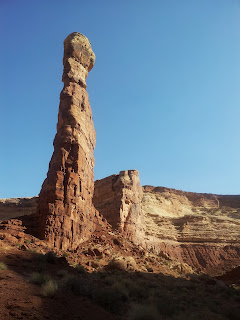 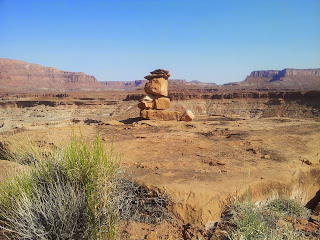 On top of Red Benches I made my own way through the draws and mounds of rock. Cross-country I went and the wind powered me along from behind. I came to the rim of Rock Canyon where I supposed had a gnarly chimney to scale down. I moved along the rim until I found the chimney. Most of the directions or information I have come from hikers hiking the other direction. So, I couldn't see the bowl below me that indicated the chimney. I found the most navigable chimney I could find and went down. I grappled along tiny holds and shifted my body between the tight chimney. Climbing down the chute I leaned back over an abyss below me to gauge my next step. I couldn't get my leg under a small ledge beneath me. I had to turn my body back around with my backpack against the rock. I crammed myself in a tight crack. This wasn't the way. So I removed my pack and sat on the tiny ledge. I gently dropped my pack 10ft and luckily it pinned up against a couple of small boulders that prevented it from sliding down another 50ft or so.

I stood back up and repositioned myself to proper foot and hand holds. I methodically made my way down holing onto fingertip ledges. Once on solid rock I found my back and let my adrenaline simmer down while I ate a quick lunch. I also gathered up my thoughts and emotions of the last obstacle.
After my quick bite, I absolutely mashed my way into Hite Marina under dark clouds. Rain occasionally fell but the cool sensation of water felt soothing.


I opened the door at the store with 10 minutes remaining before they closed. I was shocked and the young man at the counter squinted and leeringly looked at me as I flung the door open. With my food package in hand as well as a plethora of unhealthy snacks, I bid the now smiling young man adieu as I went to the ranger station for some shade. Under the canopy I enjoyed the company of a cyclist, Gus, on the Western Express portion of the TransAmerica Bike Route. I felt great, and couldn't stop talking... 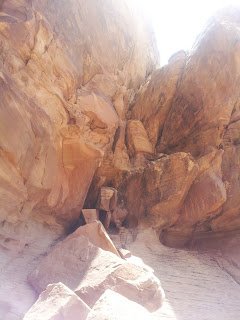 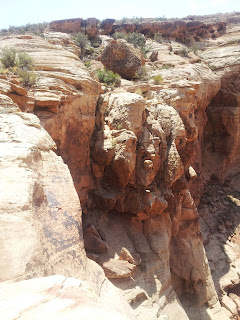 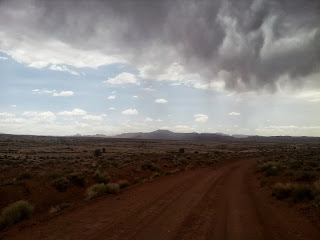 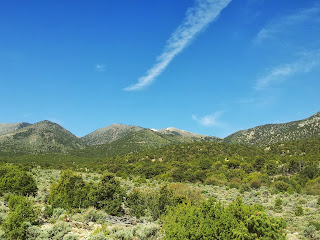 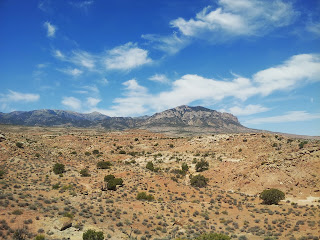