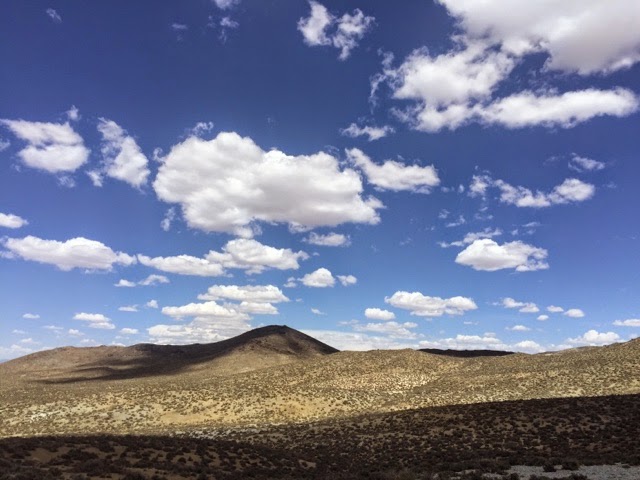 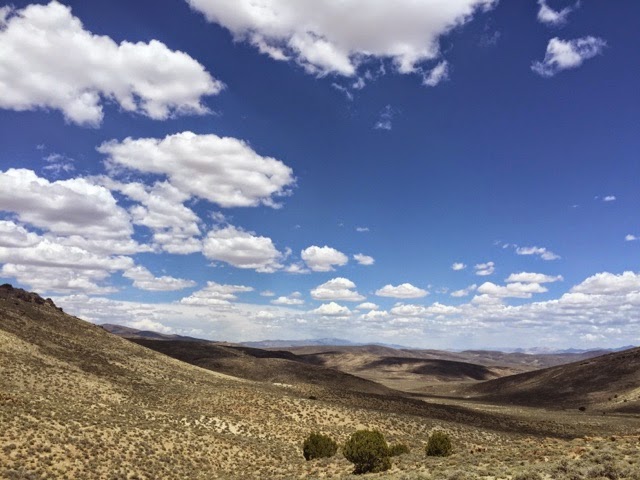 The wind whistles and zips like a careening train. Constantly the wind pushes at full force, like a gale, and the whirl of the high pitched invisible air is deafening. The cold borne of the wind is biting, annoyingly so. It's all quite dreamy actually. I drift in thought hypnotized by the wind, by its metronomic whips, that every Eastwood Western should have been filmed in Nevada and the Great Basin. No extra filters needed, no additional sounds. It's all here. Sagebrush and juniper, gold mines and saloons, desert and mountains, barrenness, emptiness, loneliness, the whistling wind; philosophy. 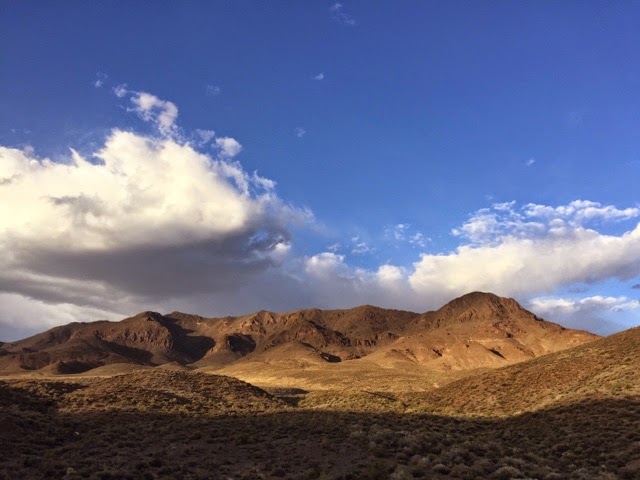 I have not seen a trail yet. And that is what makes this route so appealing, that alluring freedom of not have any judgment from yourself or anybody else. You do what your personality needs, you go where your feet guide you, and you let your instincts take over. I have not seen a running stream or creek yet. Salt encases my clothing, dirt cakes my legs, and my skin is weathered like someone who has lived, worked and played outside in Phoenix all their life. I still get scratches from sagebrush or other spindly brush but I hardly get any skin punctures, just a dry slash mark. 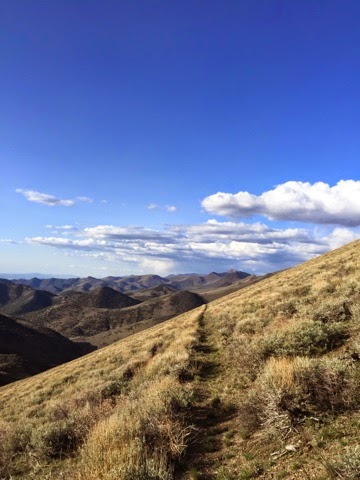 I squint. My brow is furrowed so I take on the look of a curmudgeon, yet I know the squint is an adaptive quality to my environment. Out here, I have no name, sometimes no voice. Only muted footsteps and muffled breathing. The wind pulses through everything out here. 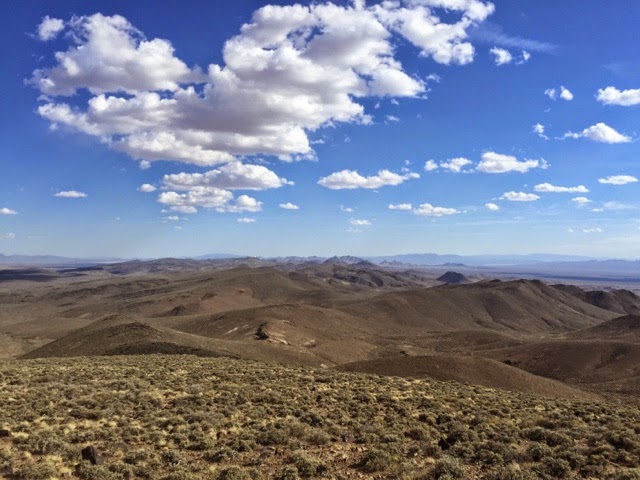 North of Tonopah sits the San Antonio Range. Rising up to over 8,000ft, hardly a soul sets foot on the peaks where the dirt road ends. Beautiful pale-green sagebrush dot the hillsides, grassy shoots sprout up in between the sagebrush, and the occasional juniper makes an appearance. The rhyolitic rocks 'bluff' out the range in blocks painted with orange or green lichen. For miles you can see mountain range after mountain range as well as the basins that fill the void between the bulky mounds of mountains. 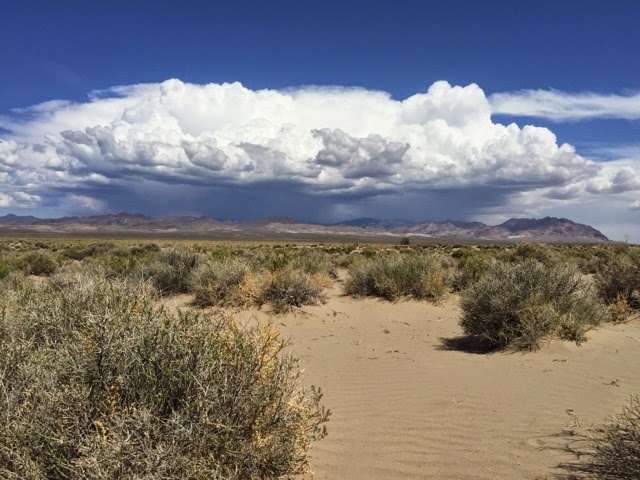 After crossing the Big Smoky Valley, I entered the Toiyabe Range from Peavine Creek on the south end of the range. I expected to see water further up the drainage but surprisingly found none. Guess it's been a dry year in most places. The cottonwoods bloomed in the lower elevations, while higher up the aspen had not quite leaved out. I immediately understood that I had arrived a tad early for a normal season, yet the snow was gone and the creeks were running dry. Either way, I was happy to be in the mountains. 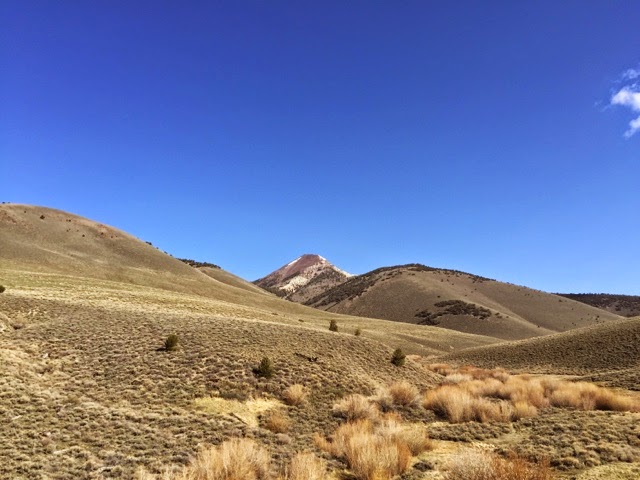 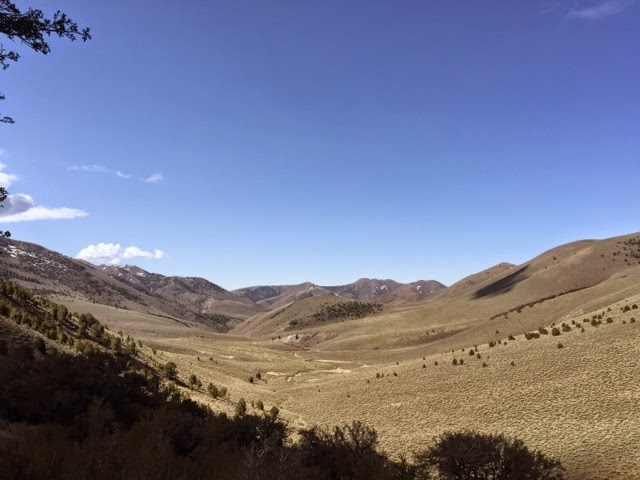 I made my first camp at about 8,000ft under a cow-carved pinyon as huge tumbling clouds steered in threatening rain. All night my tarp flapped. My makeshift camp spot proved not only to be uncomfortable but the only place around to even set up a tarp, for there was no way I was venturing up to the divide with the way the wind was blowing. I slept well enough though. Up early the next morning with my excitement, plain sheer joy of being in the mountains, I scrambled up to the divide amongst a clear sky with a brisk wind. At the pass I spotted the pyramid peak known as Arc Dome that simply dominated the sky and landscape. 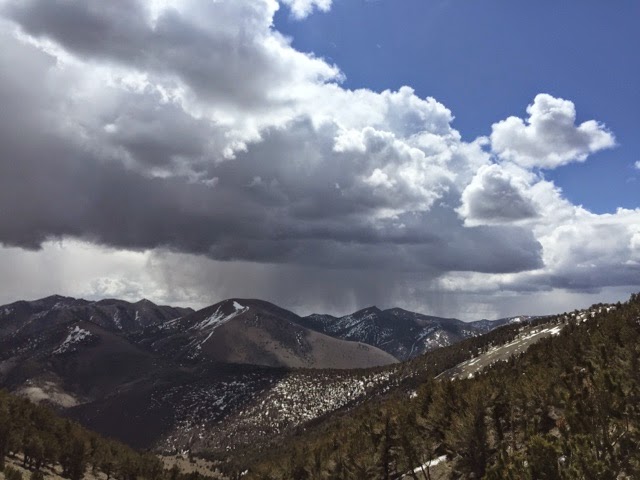 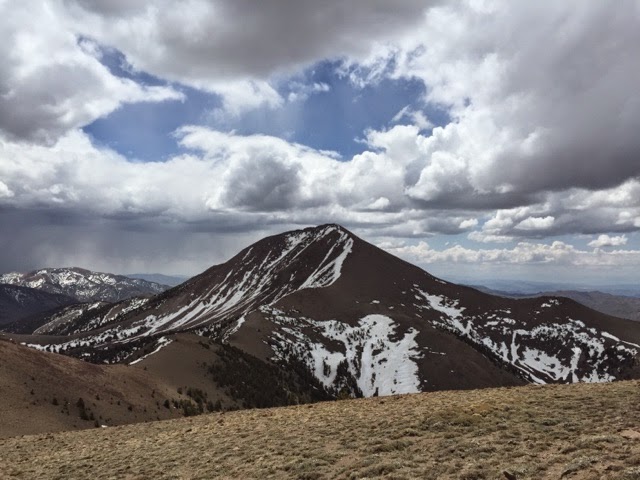 I scurried down to the Reese River, which was basically running like a small creek. I passed beaver ponds, willows and dogwood along the river, and pine trees. I wanted to get as close as I could to Arc Dome to see if I had a chance to summit the lofty peak. As I hit the pass between the Reese and Twin Rivers large cumulonimbus clouds towered above me. I could scope out curtains of rain hitting other tall peaks. I forged ahead and took a side trail that would put me at a low point on the ridge beneath Arc Dome. Steeply I hoofed it up along overgrown trail. Cairns had been placed to mark the route but the sage grew over them. Eventually, I met a ridge that abutted a cirque filled with snow. The trail disappeared and I picked my way across boulder fields of clumpy talus and snowy slopes. The ridge I had wanted to attain rimmed out in an overhanging cornice. I continued picking my way until I found a manageable way up to the top. 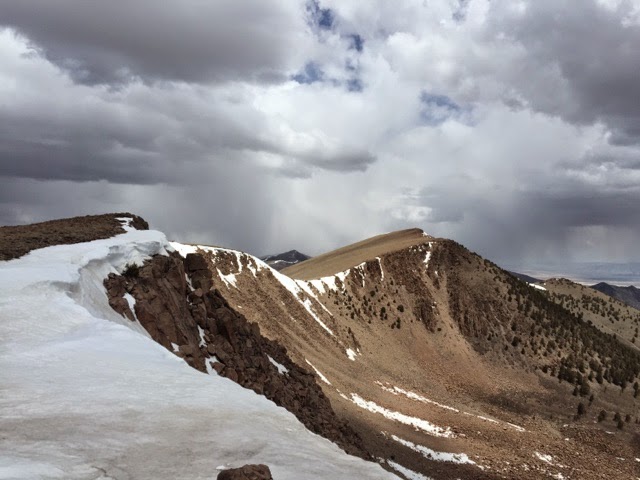 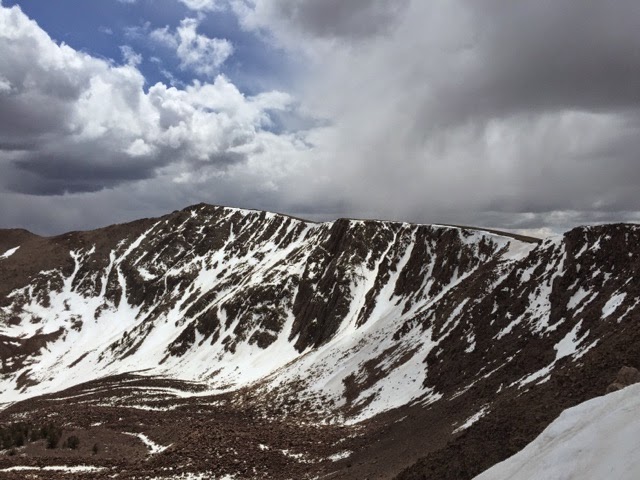 Clouds continued marching in. The wind howled and screamed right in my face. I decided not to summit with the conditions. I did not want to be stuck up on an 11,000ft ridge with a thunderstorm hammering down on me. Up and down the ridge I went, northward along the Toiyabe Crest Trail. The views from the high alpine zone were stunning. I marveled at the vistas all around me. Enormously looming shadows moved swiftly over the golden alpine tundra and turned a bright environment to an ominous one. One after another, a massive cloud would move in. The wind shellacked me from the west, the gentler side of the ridge. I leaned in and powered on. I encountered a few large snow fields at sketchy angles. One in particular I maneuvered along the spine of the slope and a cliff. Block-shaped boulders peeked out of the snow and I lumbered down them very carefully, for below the cliff dropped a 500ft abyss. Now, in a steep gully I began to chatter my teeth and my extremities became numb. The air temperature was not the issue, rather it was the wind. I finally managed to get to some trees and take cover for about 5 minutes. I couldn't stay longer because I had become too cold. I hurriedly ate, put on all my clothes and left. Within a half hour I warmed up. 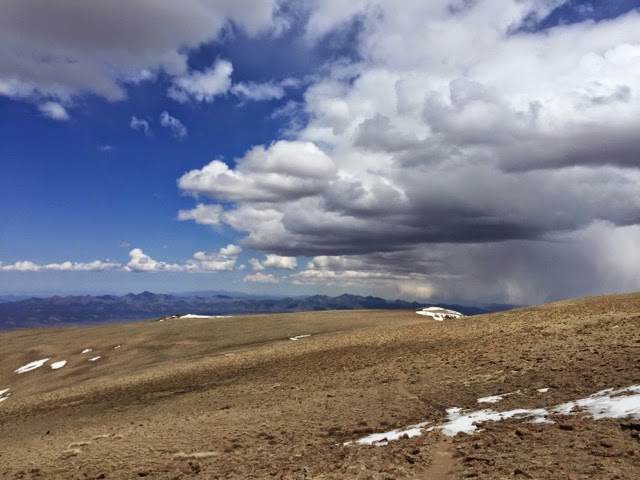 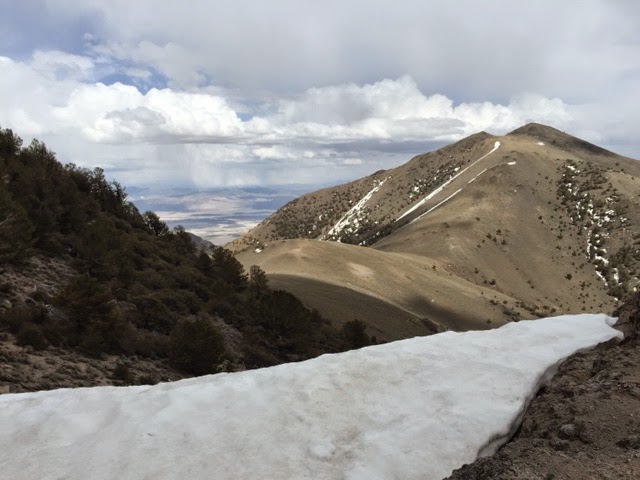 All day I hiked on the crest. Snow flurries occasionally flew and the wind blew constantly at about 30mph. Gusts would sometimes push 50mph at least. I earned this day, to say the least, but god damn what an amazing day. To top it off, I was rewarded by a refreshing spring and a beautiful saddle to camp on top of with lush, fragrant sagebrush and large mahogany, even a pretty sunset. 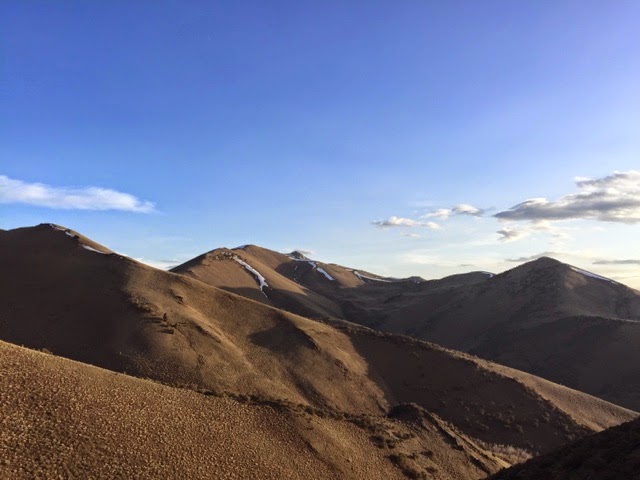 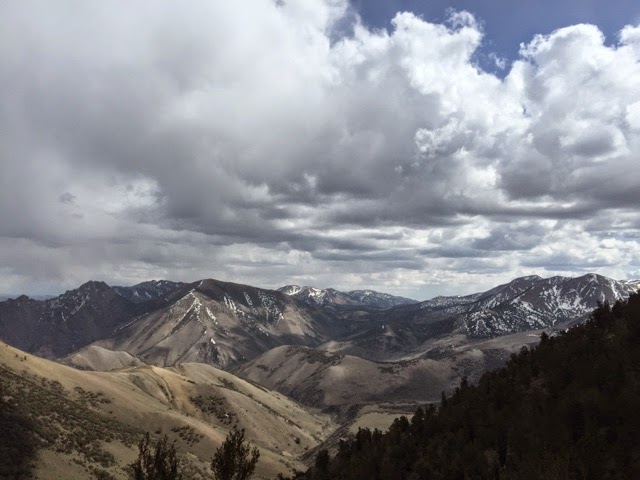 I continued in the Toiyabe Crest Trail the next day. Rather than keeping to the crest itself like it did in the Arc Dome Wilderness, the trail stayed lower, around 9,000ft, for a good 15m or so. However, this meant running water sources and wind coverage. In and out  of drainages the trail meandered, even zipping through corridors of aspen. More mahogany groves embedded in the hillsides. These mahogany trees are as big as any as I've ever seen, including the Bighorn Mountains. Speaking of mountains, the Toiyabe Range reminded me of the San Juans of Colorado in the southern portion while the northern portion reminded me of the Beaverhead of Montana. I became amazed at how isolated the beauty of these mountains. The Crest Trail runs 71m, built by the CCC in the 30's, hardly sees any usage or maintaining, yet it is in primo condition, just ripe to be tromped. I did not see even a single soul, let alone a single footprint. 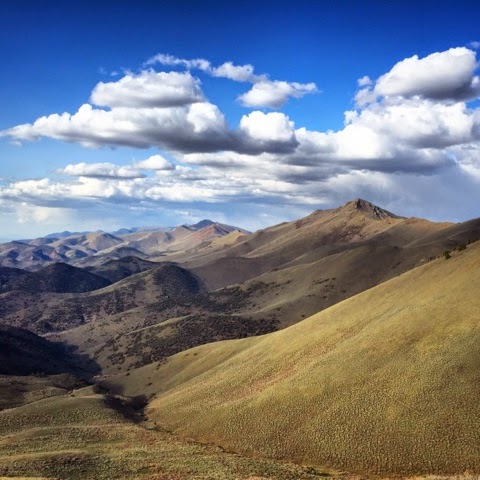 After the ins and outs of the drainages, the Crest Trail takes you up to the actual crest for the last 8m or so. It felt good to be back at 10,000ft again. Exhilarated, I pushed on quickly. Then, the savage wind hit. Pushing me and thwarting me side to side I hiked dead straight into the screaming wind. I marched entranced by my gait and rhythm. I soaked it all in and embraced the brisk and harsh invisible air. Near where the trail descends the crest for the last time, I spotted a large coyote. So large I thought maybe it was a wolf. Being that I was up wind from the coyote I ran a bit to get a closer look. The coyote trotted across a snow bank heading straight towards me with his head down. Finally he looked up and I ran faster. I had to catch the 'wild'. A fever took hold of me as I saw the coyote lope down the trail bobbing up and down between the sage. I felt alive, so fucking alive. 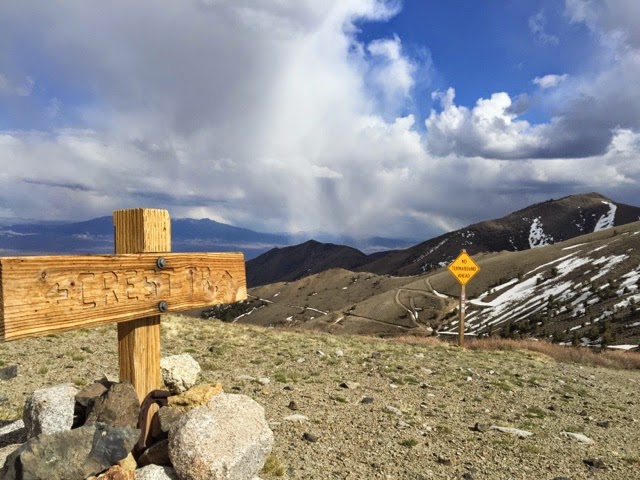 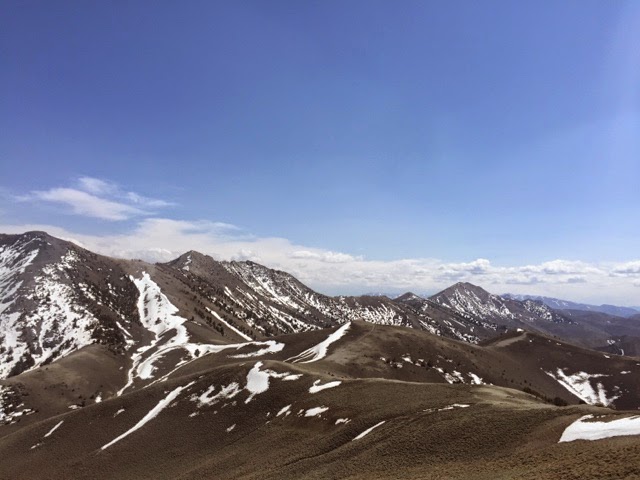 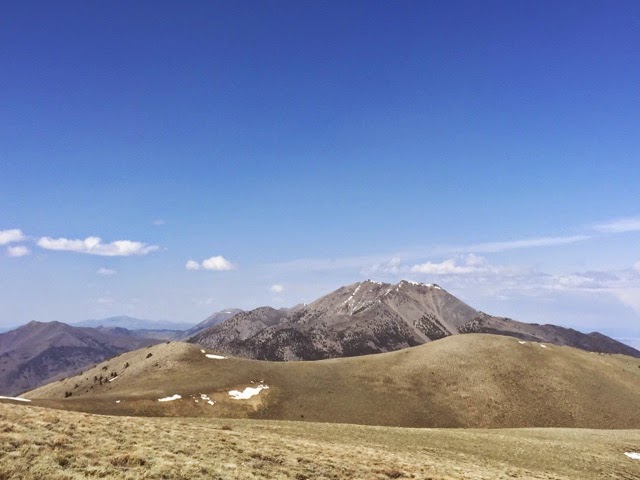 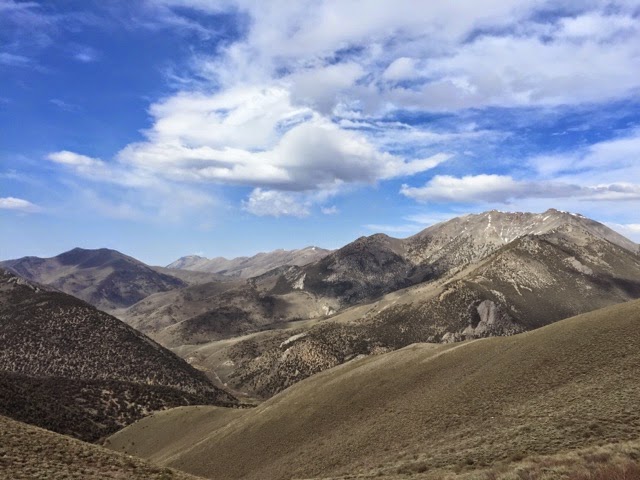 I got into the tiny town of Kingston before the storm hit. I waited it out for two days. You can spend all your time planning a route or an adventure, however, you can never plan for the random encounters with incredible people. Ann and John Miles at The Miles End Lodge B&B treated me like family. Secluded from the rest of the world, they helped me get centered, relax, and most importantly breathe. 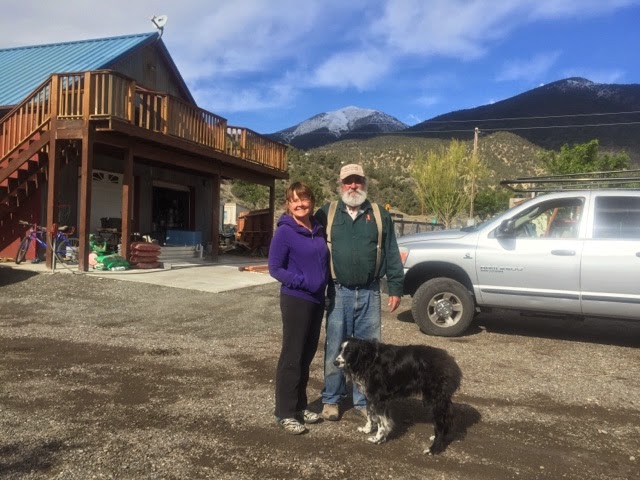 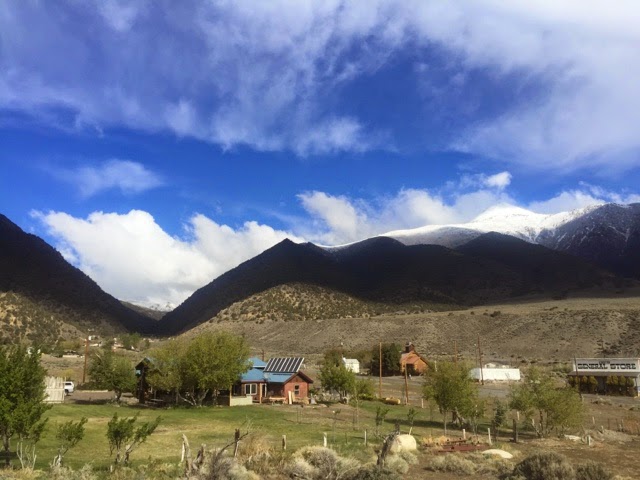 Posted by dirtmonger at 7:26 PM