PCT Socal: A Year on Trail 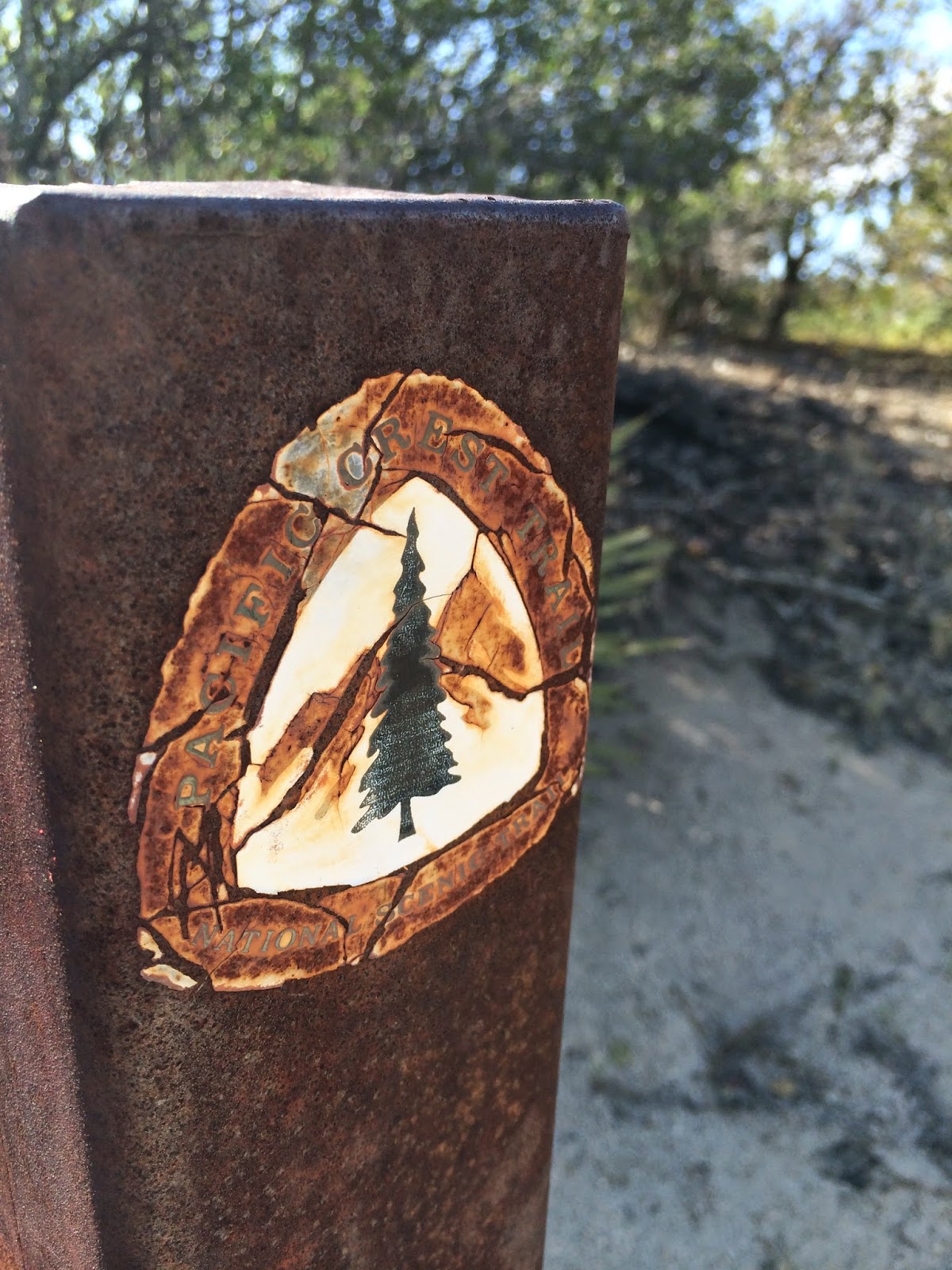 "We're almost there," I said rather calmly.

Pace is the interpretation of the world around you. For years, I've heard other hikers say: "Why do you hike so fast?" "How do you see the world around you at a faster speed?" I come back to these notions and questions often on my hikes but never so much with a hiking partner. See, our minds are wired differently. How we interpret things, or gather information, is usually a function of how fast we think. None of the 'speeds' are wrong. All are just right. I've had to slow my normal pace to hike with someone, yes, but not because we do not interpret things the same, nor because she is 'slow.' In a sense, we are the same pace.

I am not a patient man. In fact, I am rudely self-centered. I think to myself everyday how grateful I am to have the patience of Bearclaw (April's trail name) to put up with my breaths of impatience, my inappropriate motivations of pushing things a little farther to appease my own ego, and my awkwardness about my ego being beaten in an immature way around herd hikers. I am humbled daily. I forget sometimes that when I started thru-hiking I had some prior experience. She is working through injuries, motions and poundings foreign to her feet. She's dealing with leaving a life behind that I have left behind many miles and moons ago. The problems associated with the opinions of others, trying to maintain a close relationship with her 2 boys, among others, all have an effect that I've no experience in. She is tough, and a goddamn hard worker. I see it everyday, every minute.

What I've learned is that our interpretation of the world around us matters to me most, our pace. A lot of that learning is simply enjoying our time together immersed on a trail that is truly spectacular. We are living a life together, figuring it all out, at our own time, one step at a time. It is not slow, nor fast; it is our pace. 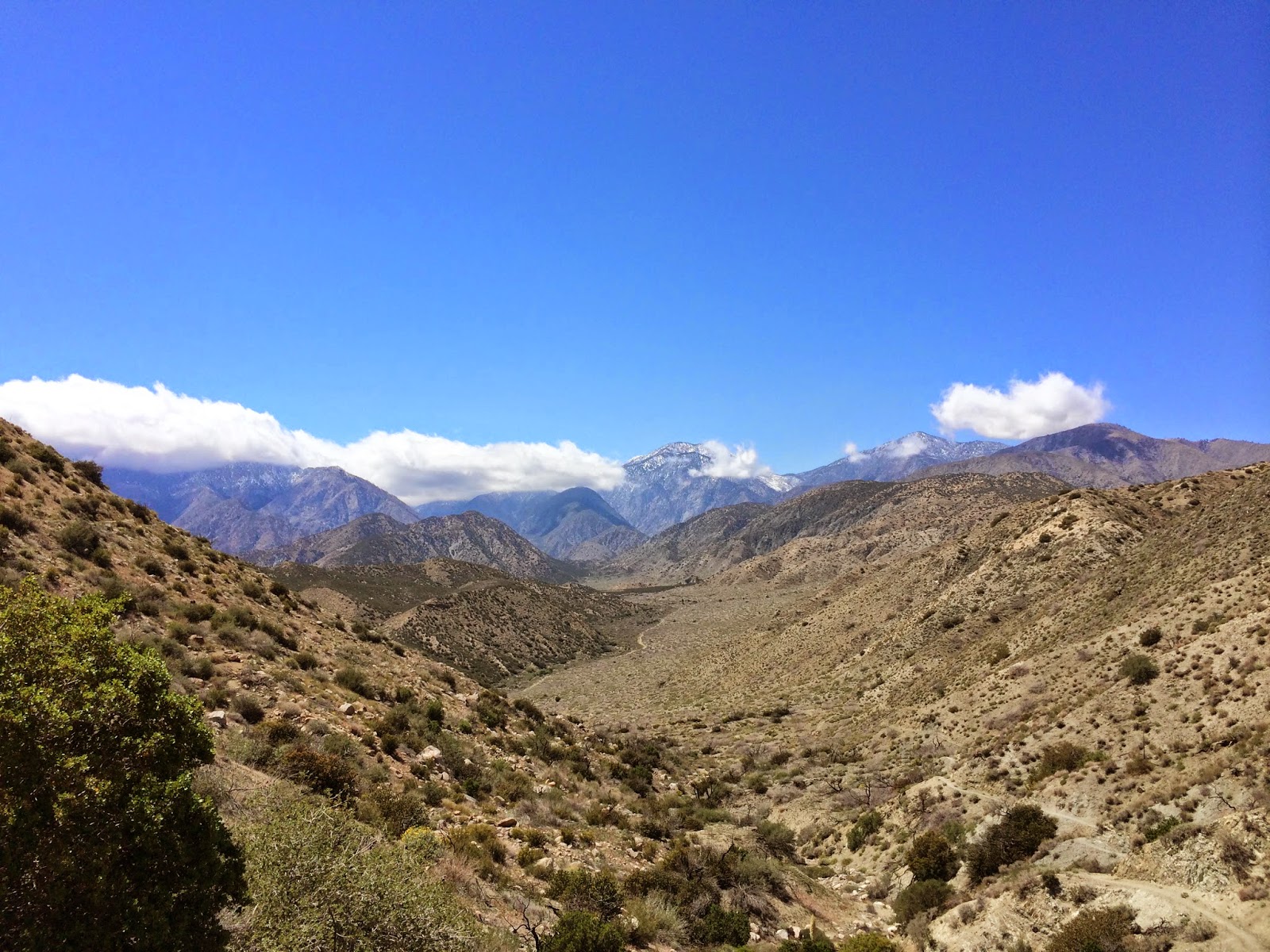 Others ask me "Is it hard to go slower?" The answer I undoubtedly give is a "yes." Mentally it is not difficult to go a little slower. Actually, it is quite easy when I think of what we are doing as a goal. The hard part is when the physical motor, which has been trained for many years and has a nature of its own, starts to kick in or I do not physically feel I've not exhausted enough energy. Then, I become impatient. What has helped me through our paces in meshing up is consistently. Speed does not matter then; it is only a matter of fluidly walking in a period of time without stopping as much. In some aspects, to me, pace is relative to the amount of consistency I have throughout the day. 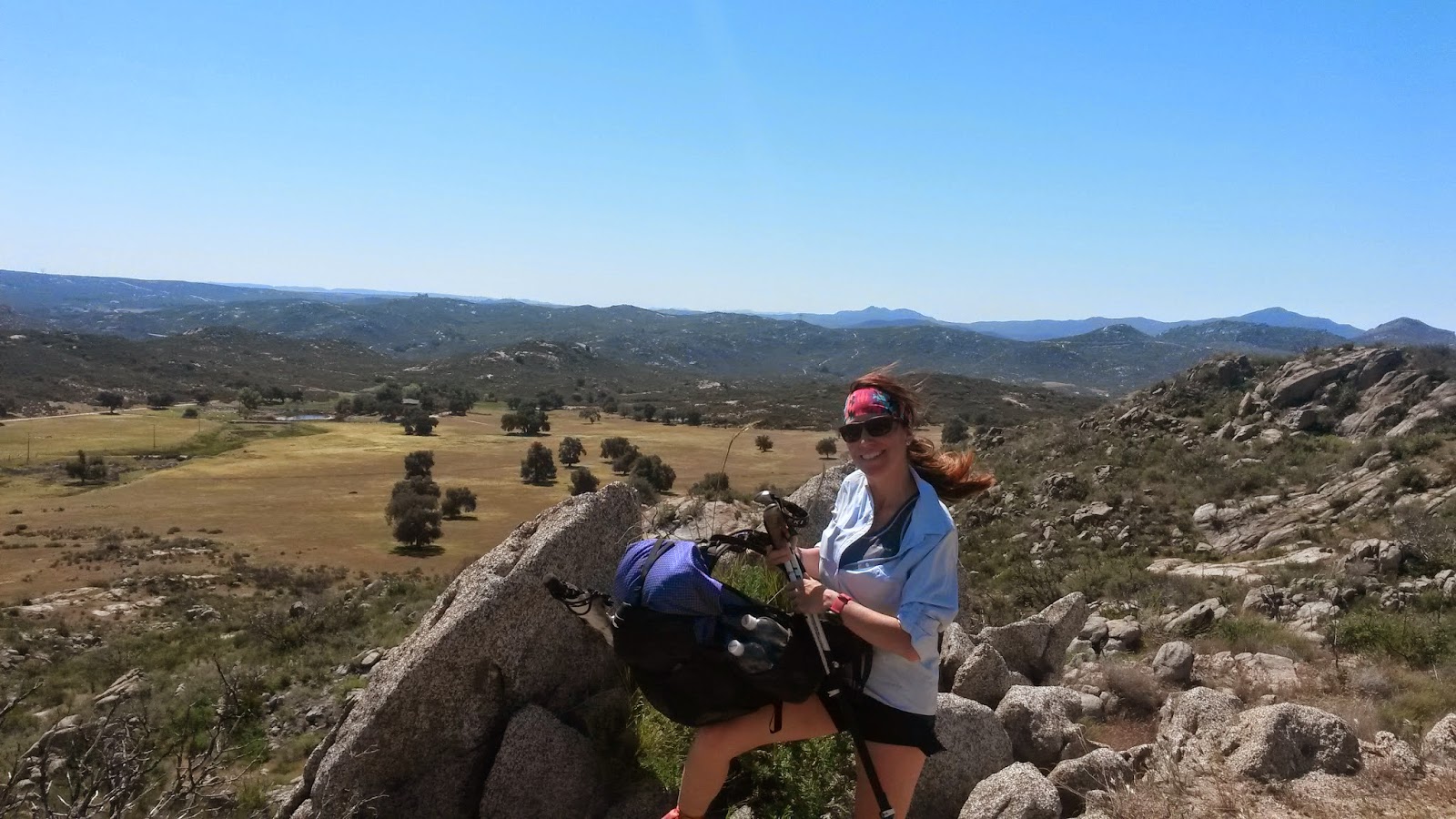 In the beginning, it was hard for me to go too far ahead or lead. I would end up waiting for her and that is something we both do not want. As Bearclaw has healed her injury and gotten stronger overall, her pace and long strides have become rhythmic to me. She is able to work me just hard enough for me to exert enough energy that I feel tired at the end of the day. I thank her for that, for I know she is compromising with me. 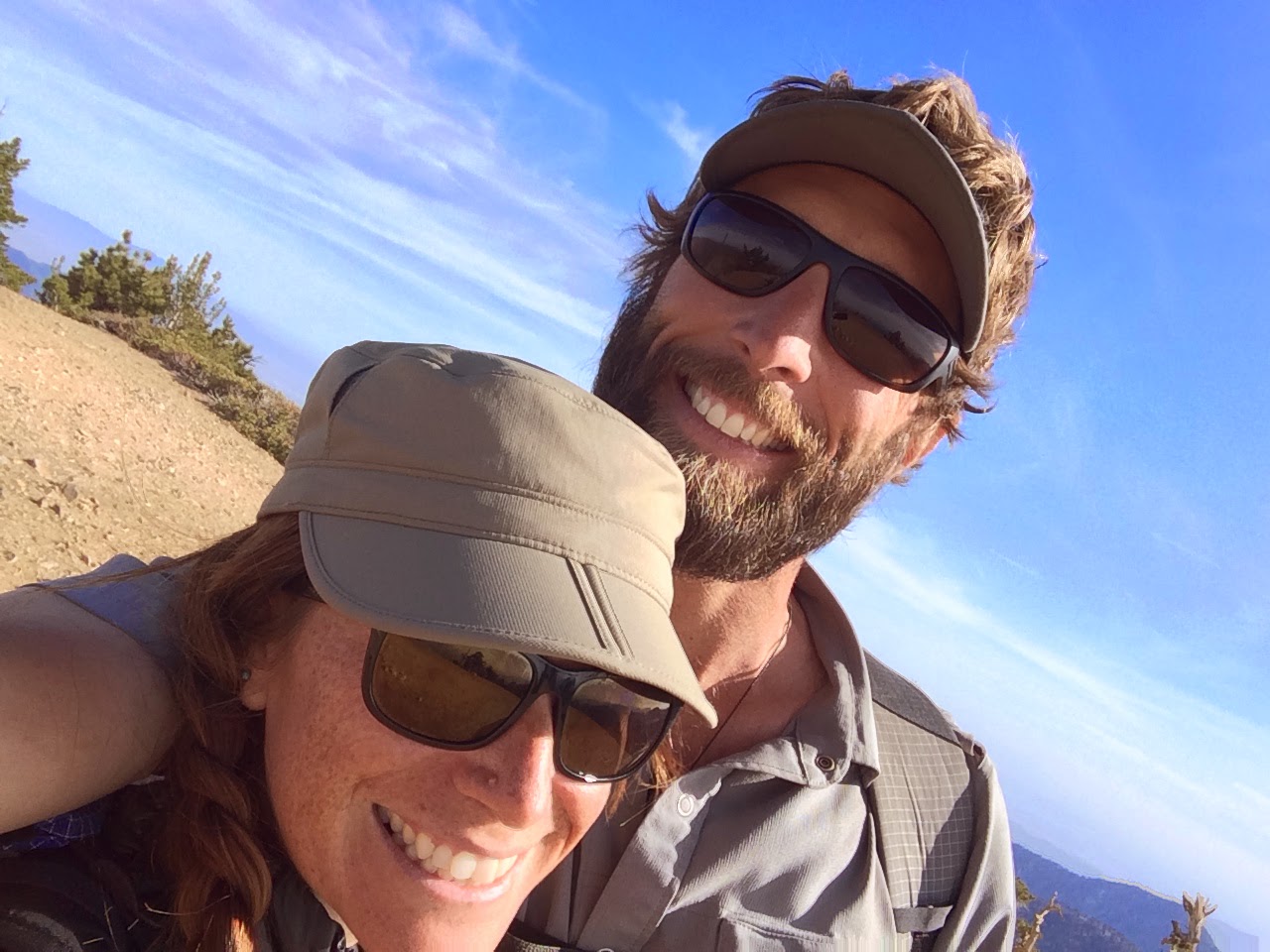 I found 2 distinctly different rose red rocks on the trail up the climb from Cajon Pass. One bigger than the other, the smaller one a sliver from the larger one. Walking a step or two ahead of Bearclaw, I handed her the larger one from up front from whence I stood. She grabbed it from behind, then I slid the smaller sliver into my pocket. I felt she accepted my proposal then. I decided to propose the next day on top of the summit of Baden-Powell. I told her I found a rare rock, a cure, called the 'marry-me-rock.' We gazed at the peaks of San Gorgonio and San Jacinto in the distant horizon. Mt. Baldy stood across the abyss in front of us. We grasped each other in complete unison, absoluteness, our future along the same path. 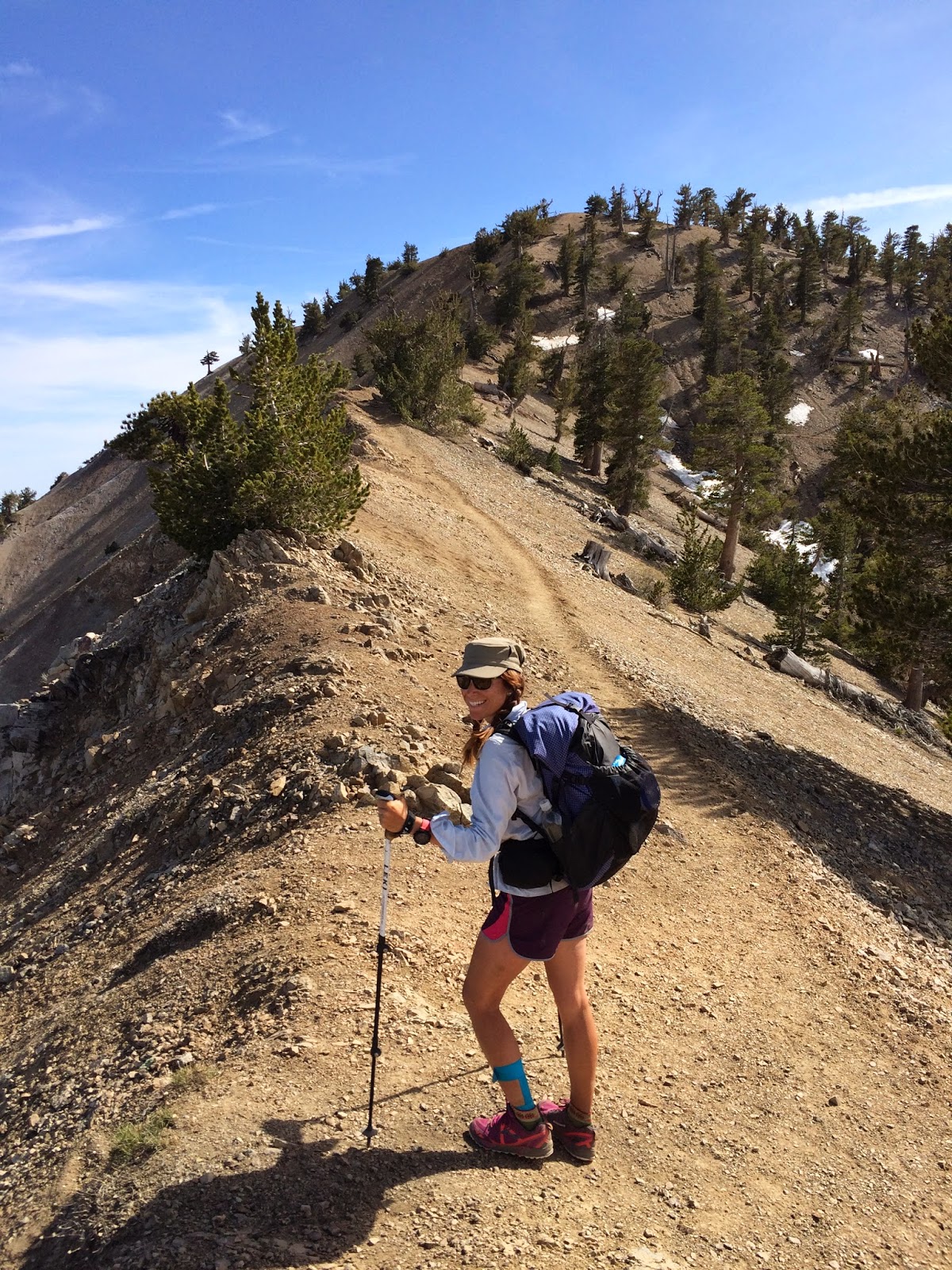 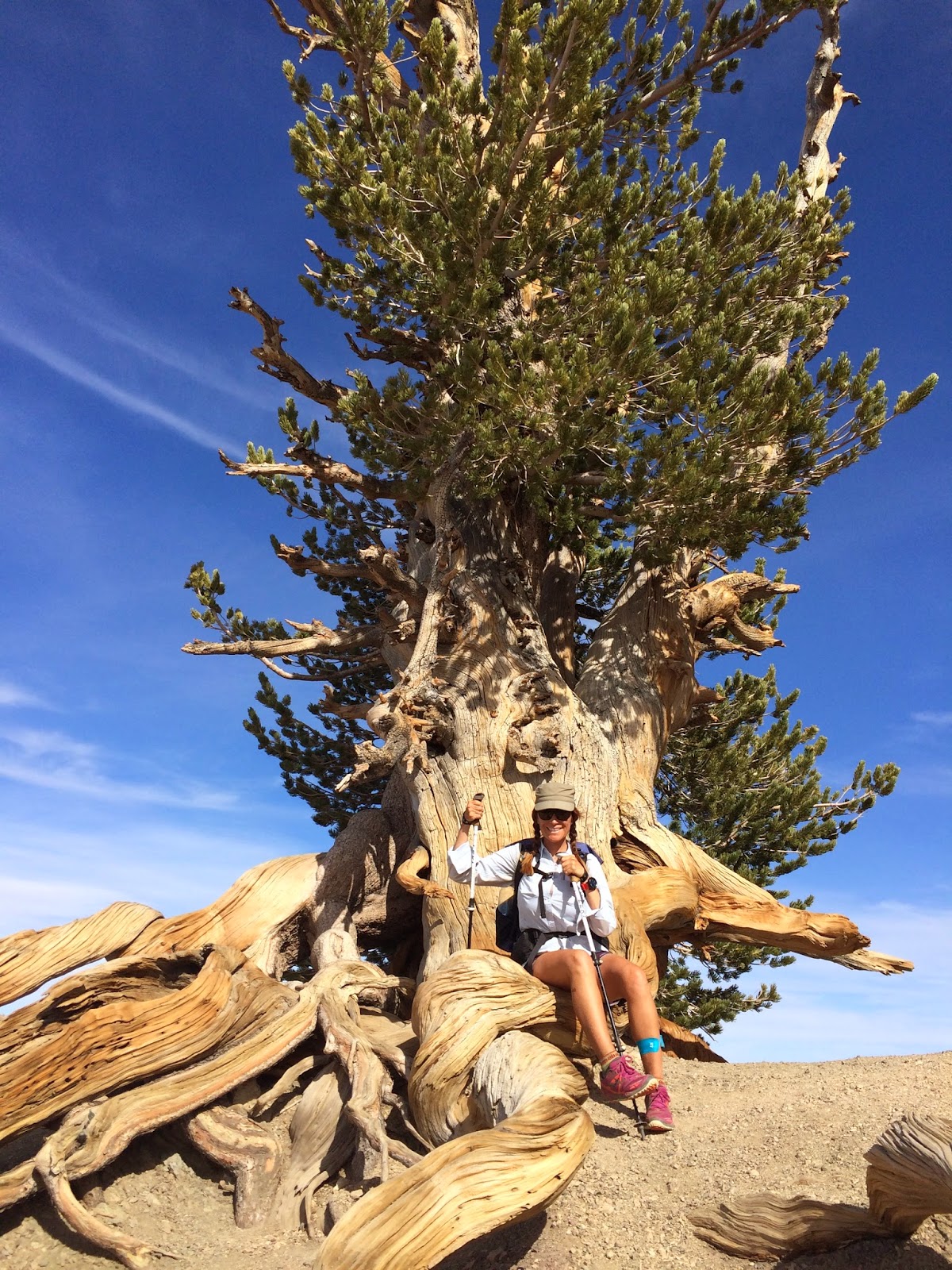 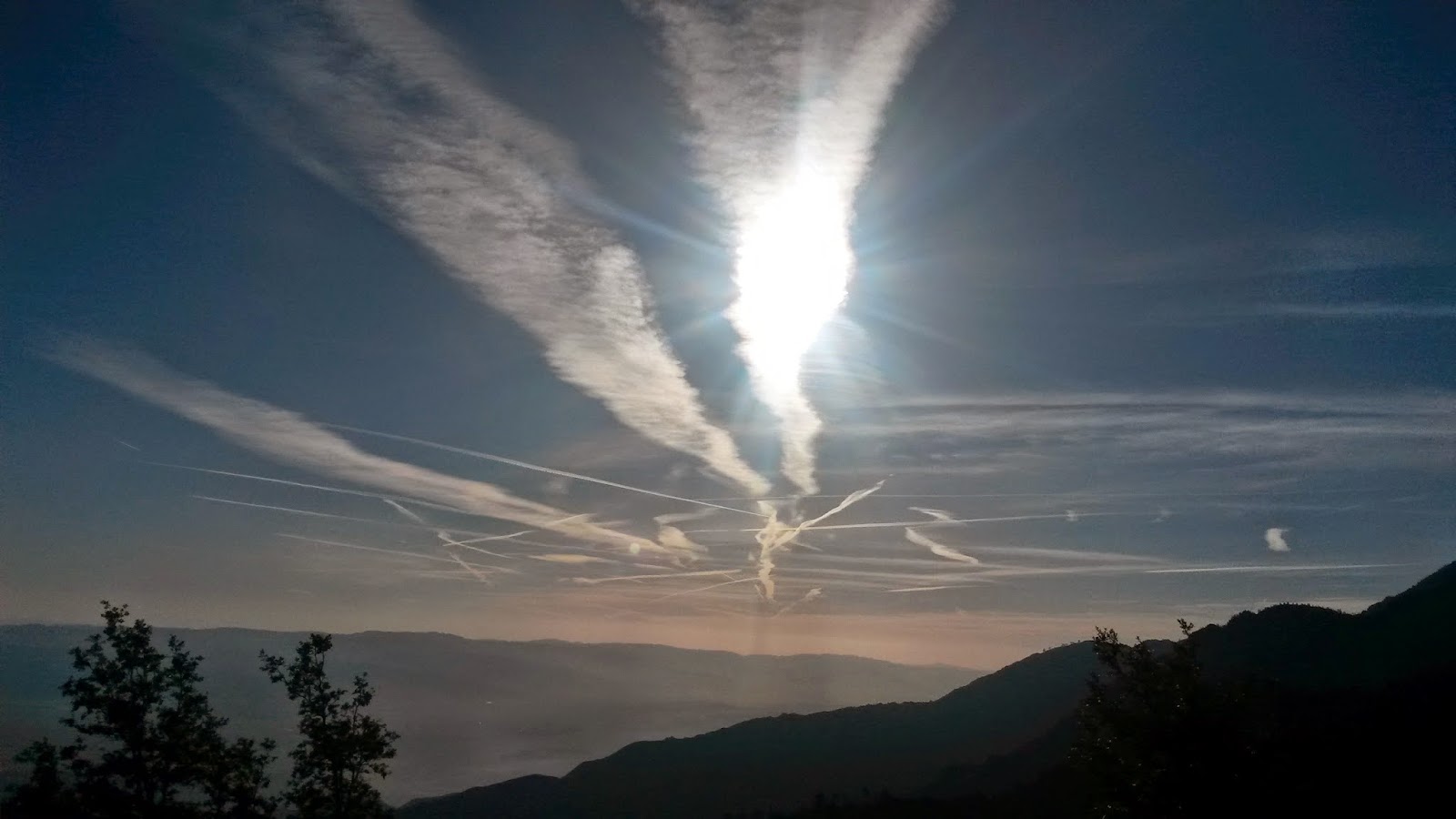 Our time together on trail has been grand. We've learned so much about each other and have had a flow that has been indescribable that only our hearts know. We laugh and create stories of outlandish proportions to while away the time. We are frequently stunned at what we see together in nature. I think the clouds moving listlessly across the sky are our favorite sights. That, and sunsets. I will never forget the moment she gaped at the sight of the ocean-blue Silverwood Lake. A lake not known for its scenic impact, it became memorable to Bearclaw as she never knew lakes could be that blue. She told me, "All the lakes in Oklahoma are red..."

I am giddy at the harmonies of the songs of birds, especially the chicadee. I am entranced by the crunch of the rocks and dirt underneath her steps. I never have felt so accepted as she laughs at my farts, lame voice impersonations, and belches. Every night we cowboy camp and gaze at the stars is a dream. She counts the blazing, falling stars. This she tells me so. 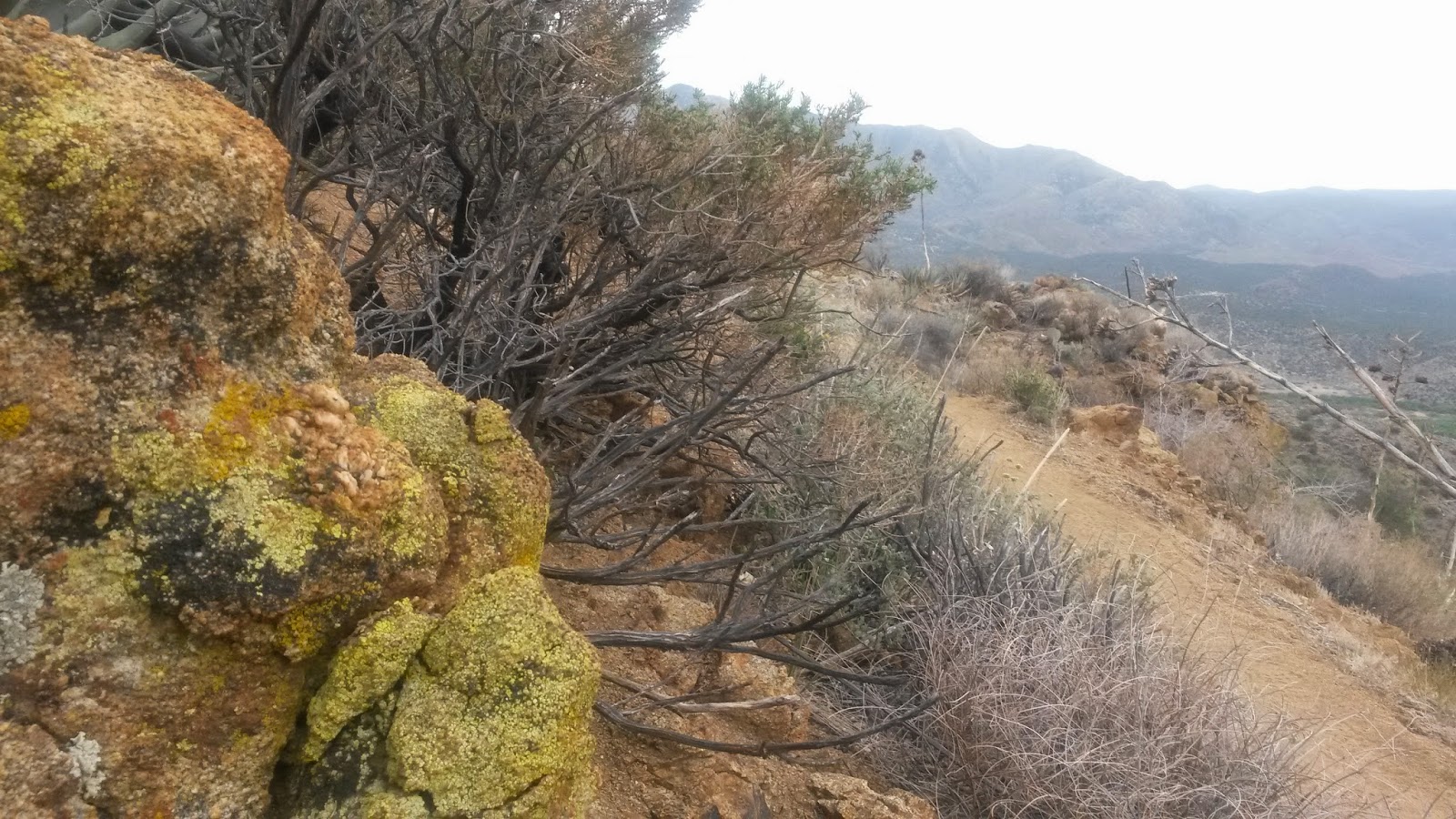 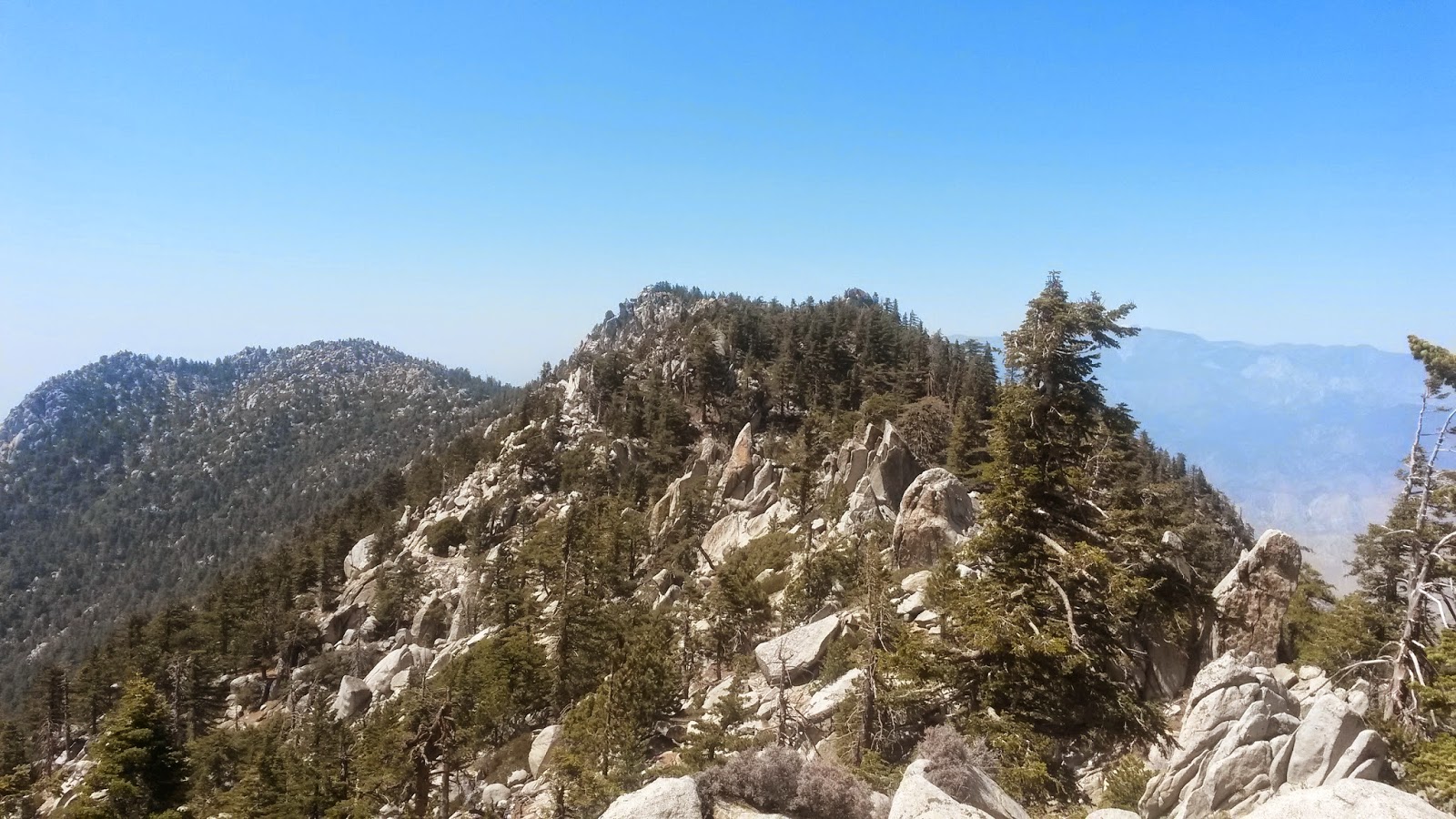 The day we left Idyllwild, we went up the Deer Springs Trail. Before the Fuller Ridge junction and the San Jacinto Peak trails I ran ahead to summit the hulky peak. Bearclaw would continue on the PCT until I caught her along Fuller Ridge. She inadvertently went down the Seven Pines Trail. After summiting I scampered down off the peak and hurried over to Fuller Ridge. After an hour or two I turned on my phone in concern of her 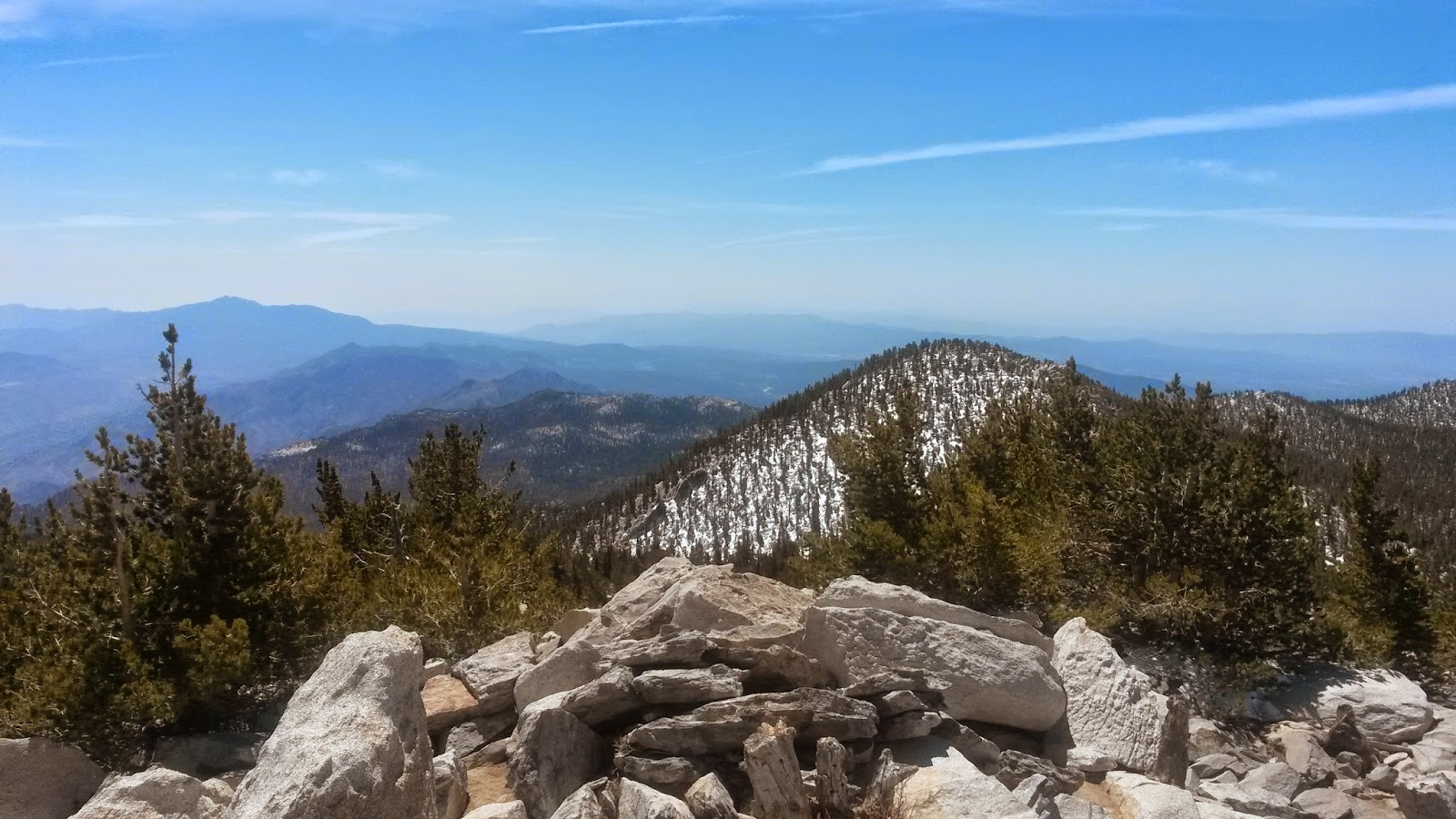 whereabouts. She called and I found out she was a few thousand feet below near Black Mountain Road near the highway about 10m from me. I flew down the trail and hit the dirt road, hung a left and ran down the road until I found her. Both of us relieved at reuniting, we slowly walked back up the road in a sober silence. She covered roughly 25m and I about 35m and about 8000ft of upward elevation. I felt an even more sense of responsibility for us. My love grew for her as I know I'd go to many lengths to be with her. The situation also helped me to re-organize my own selfish feats I may have wanted to do during our thru-hike. Because in reality I just want to spend all my time with this woman in the wilds.

Leaving you with Sunrises and Sunsets: 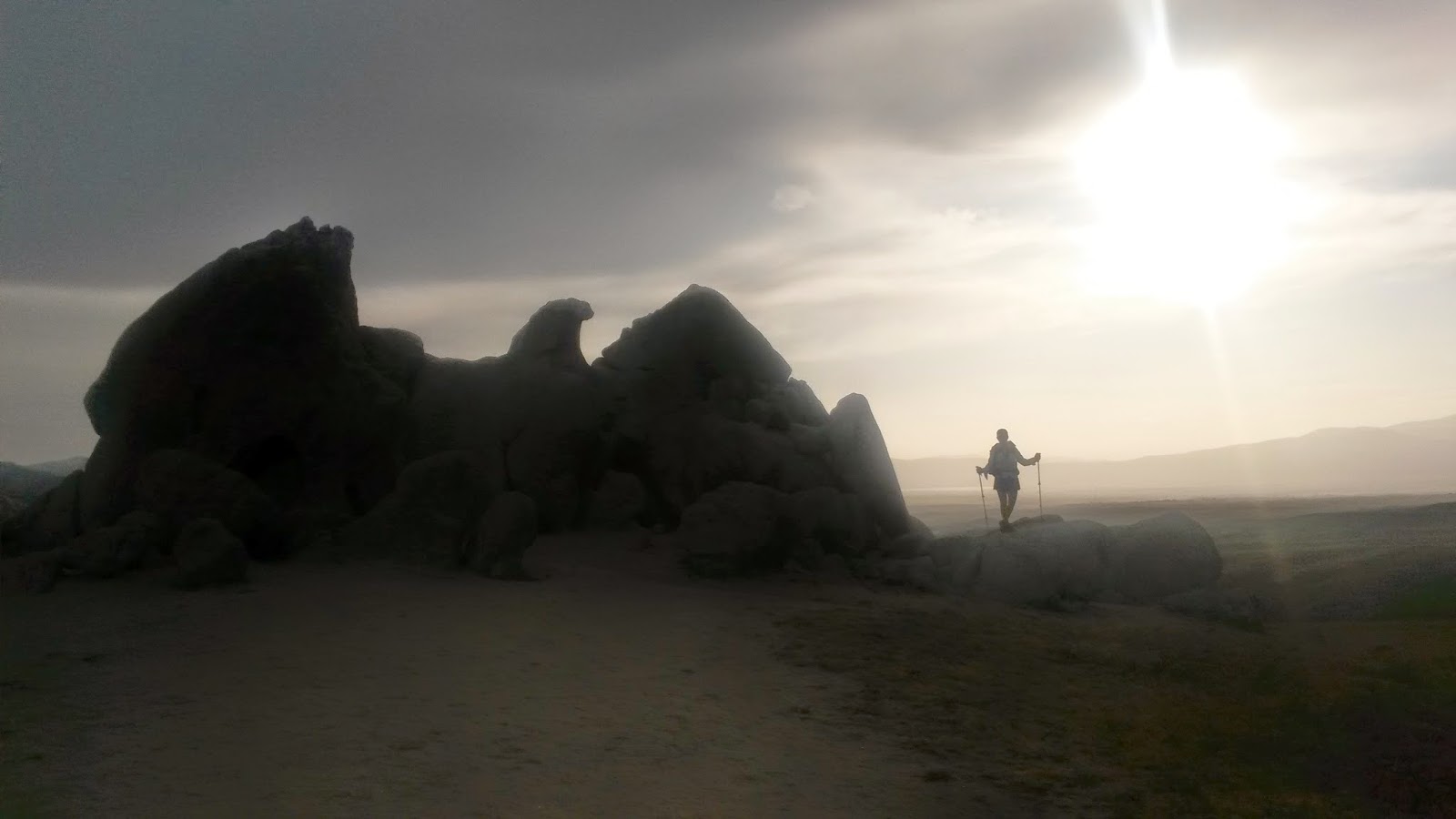 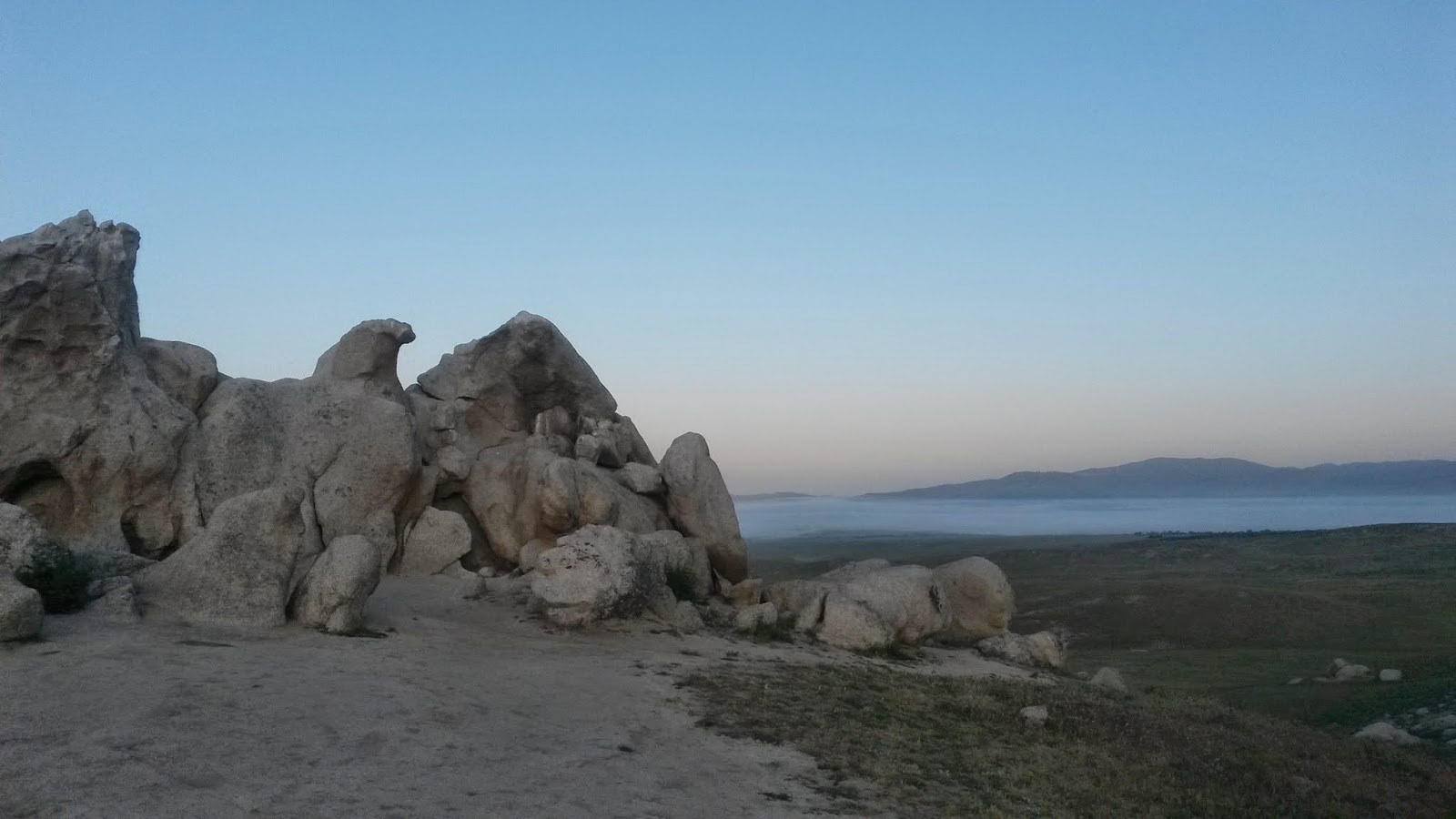 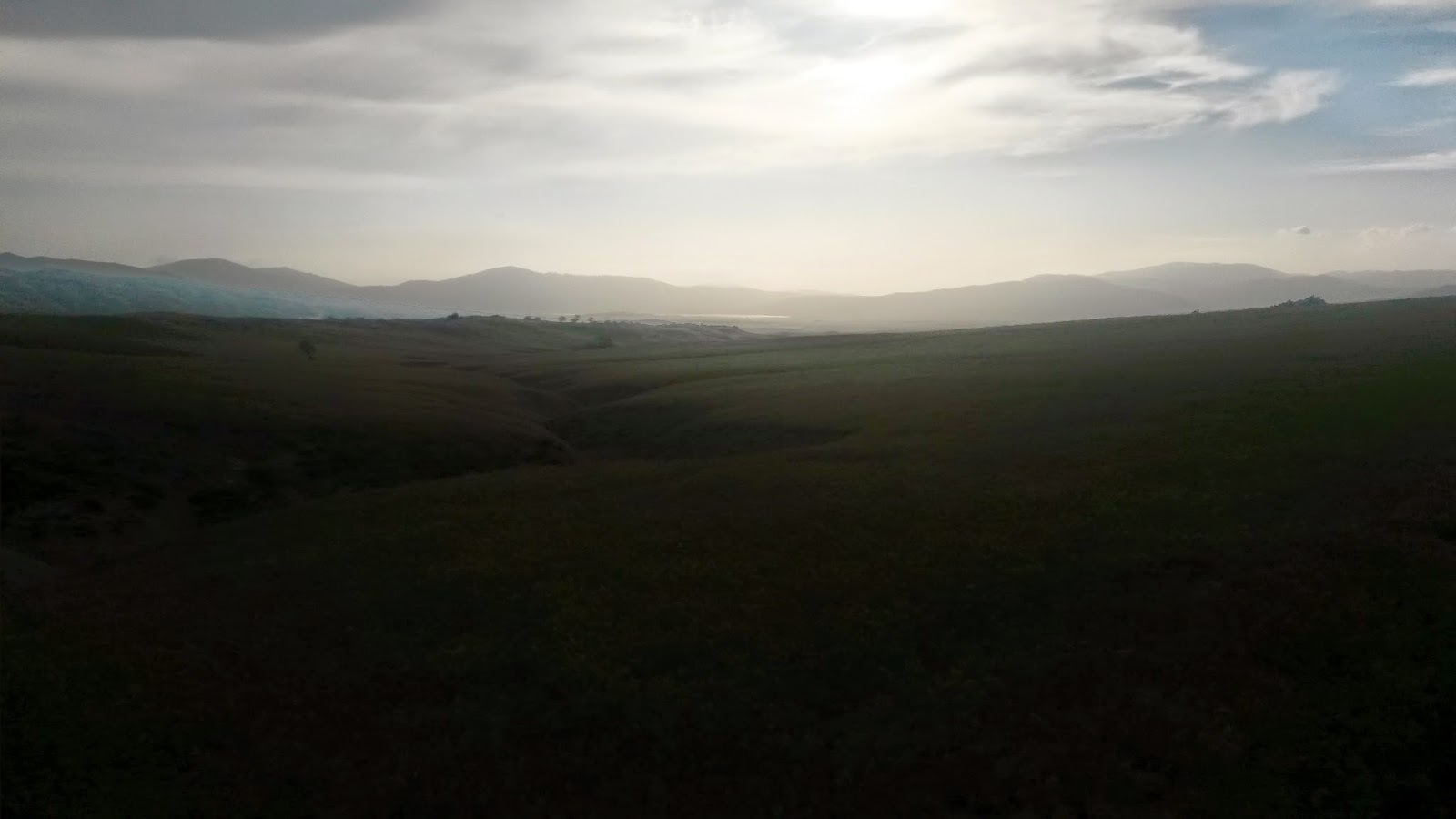 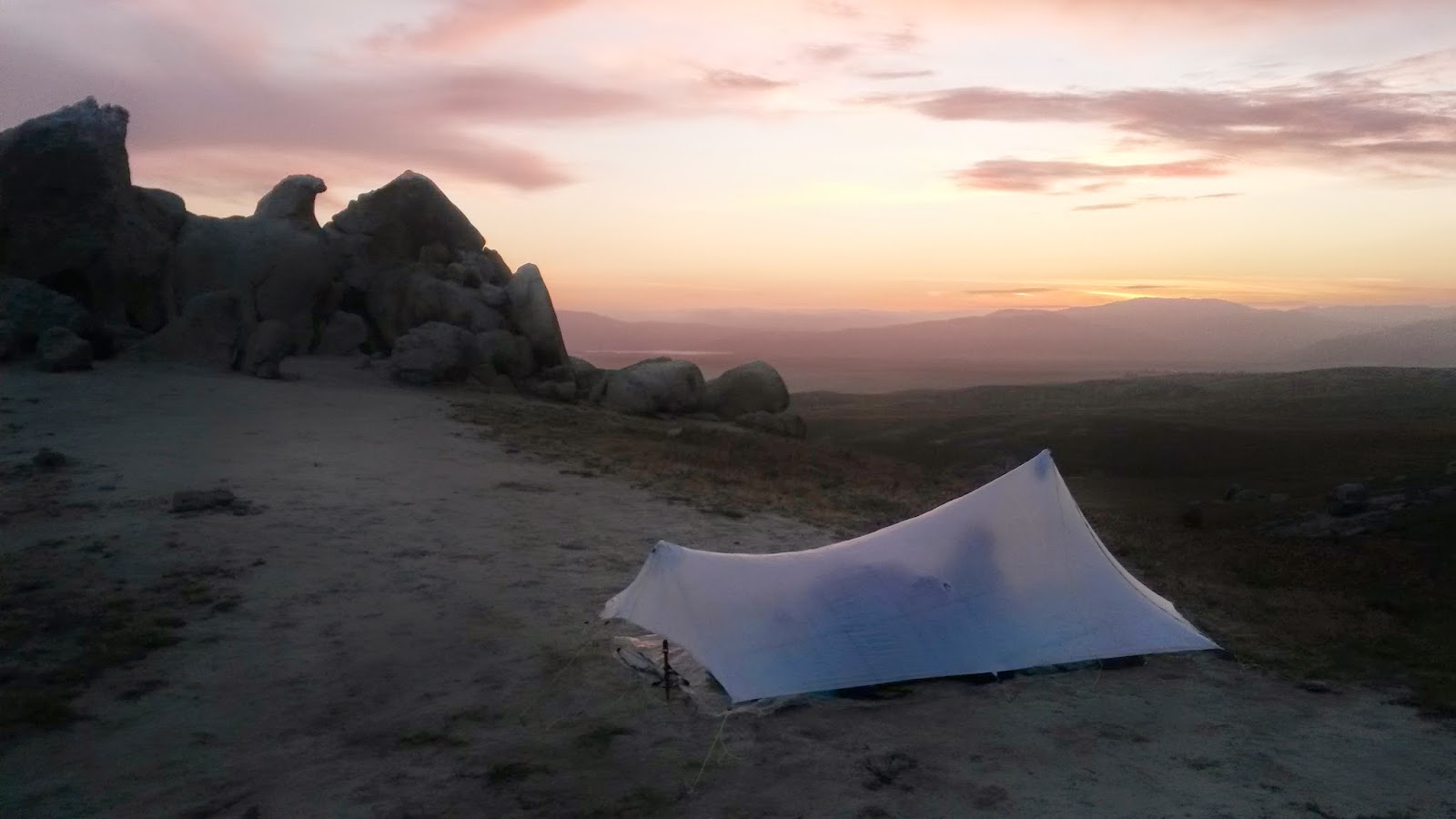 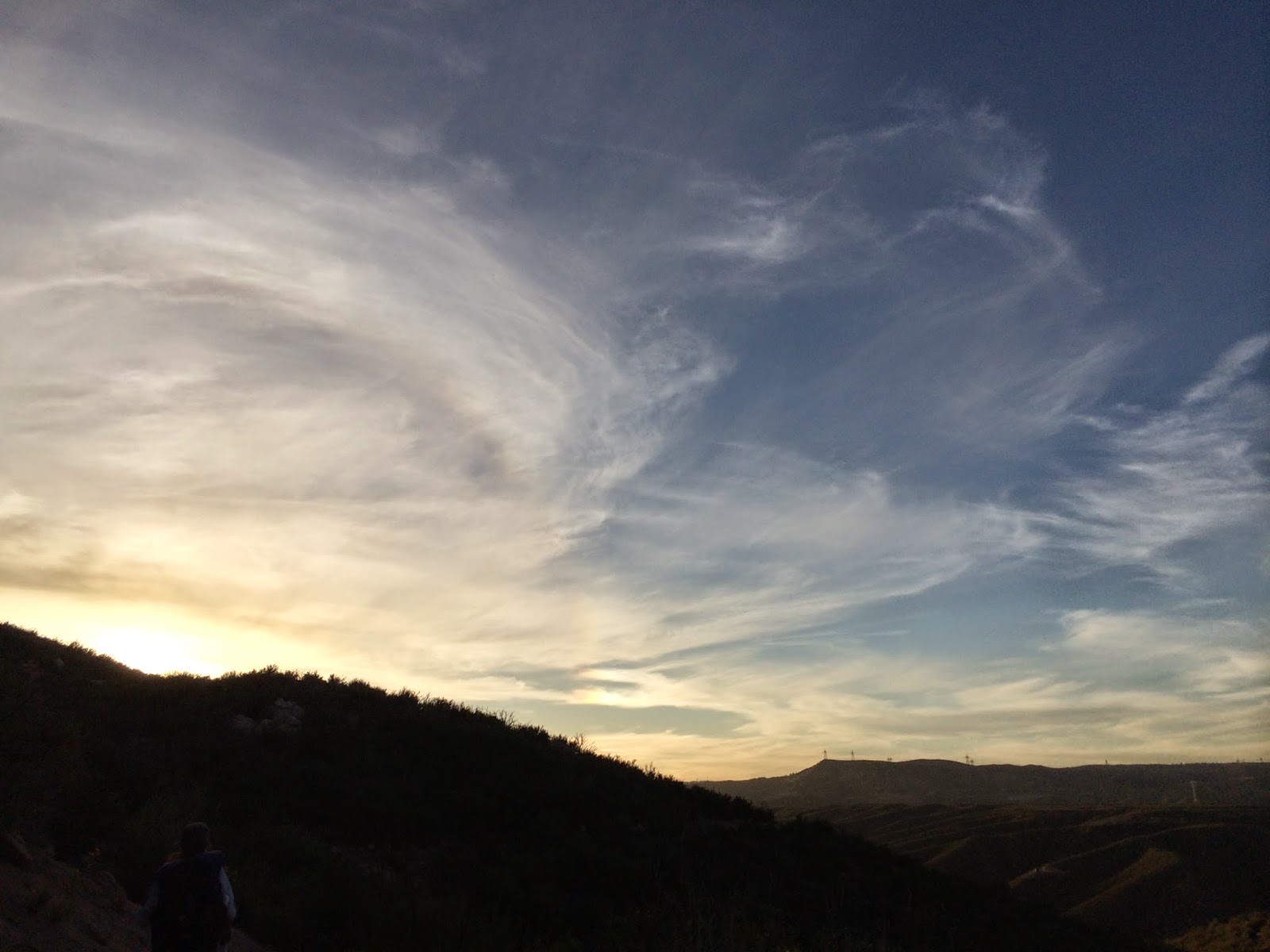 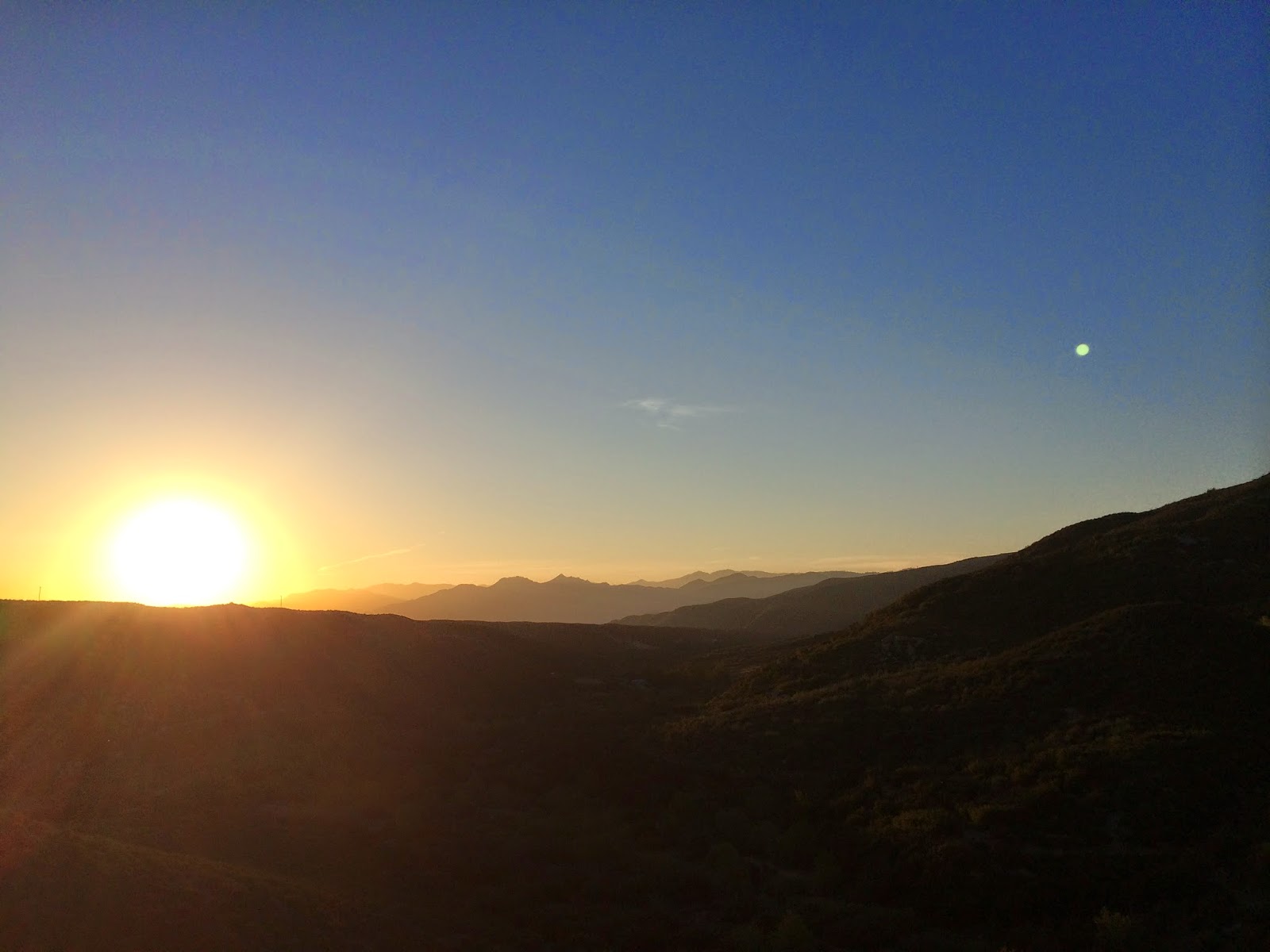 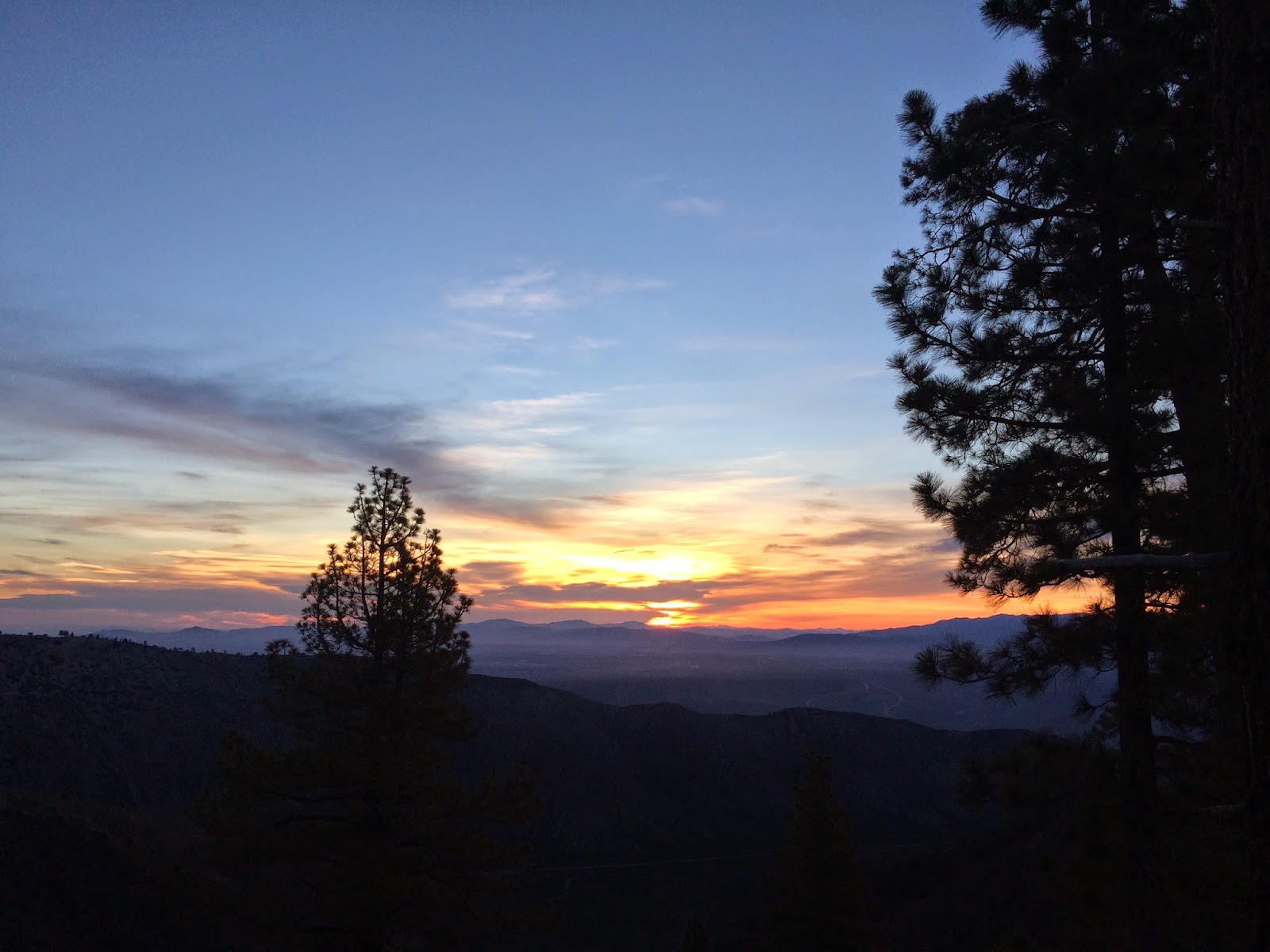 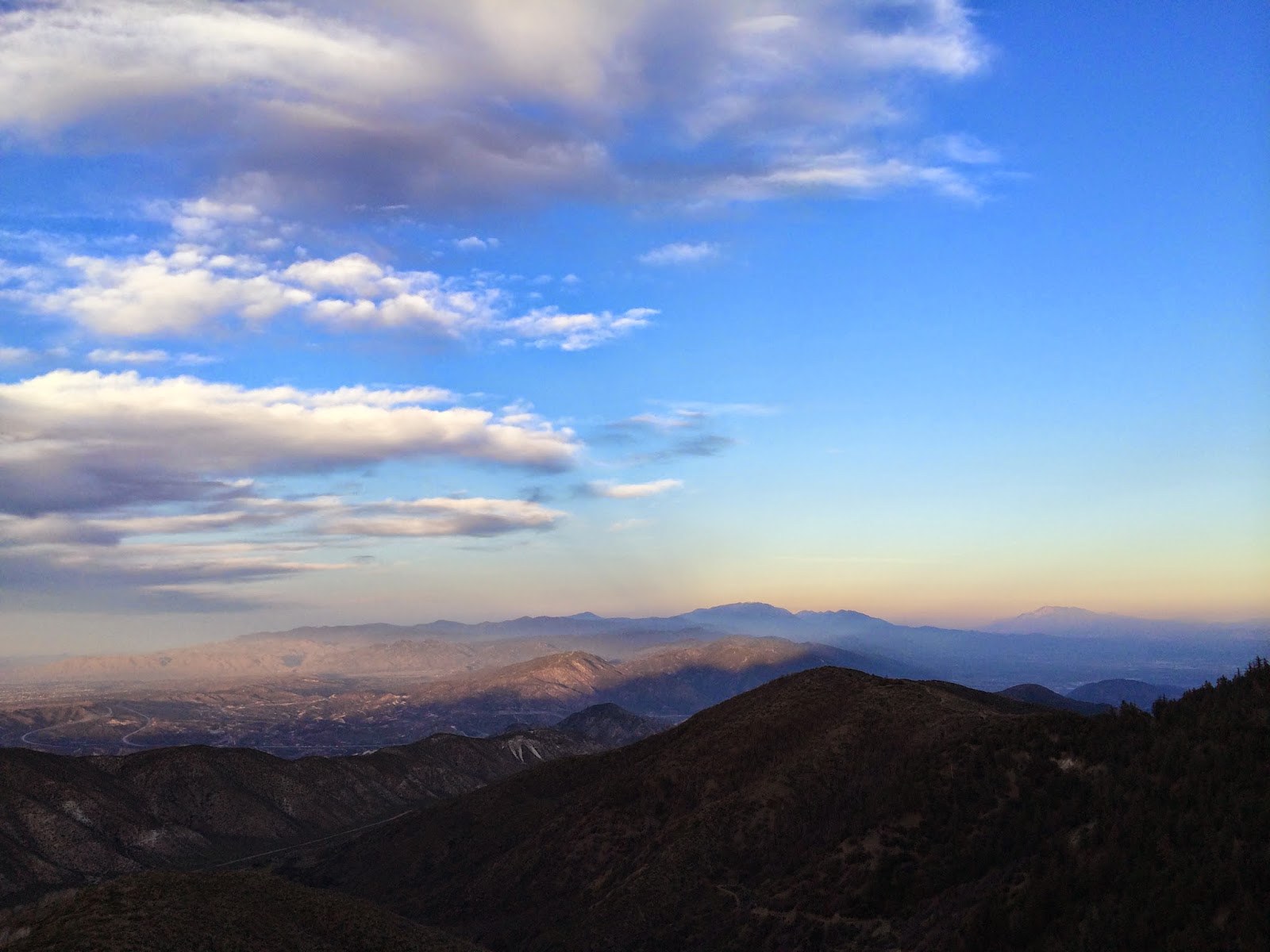 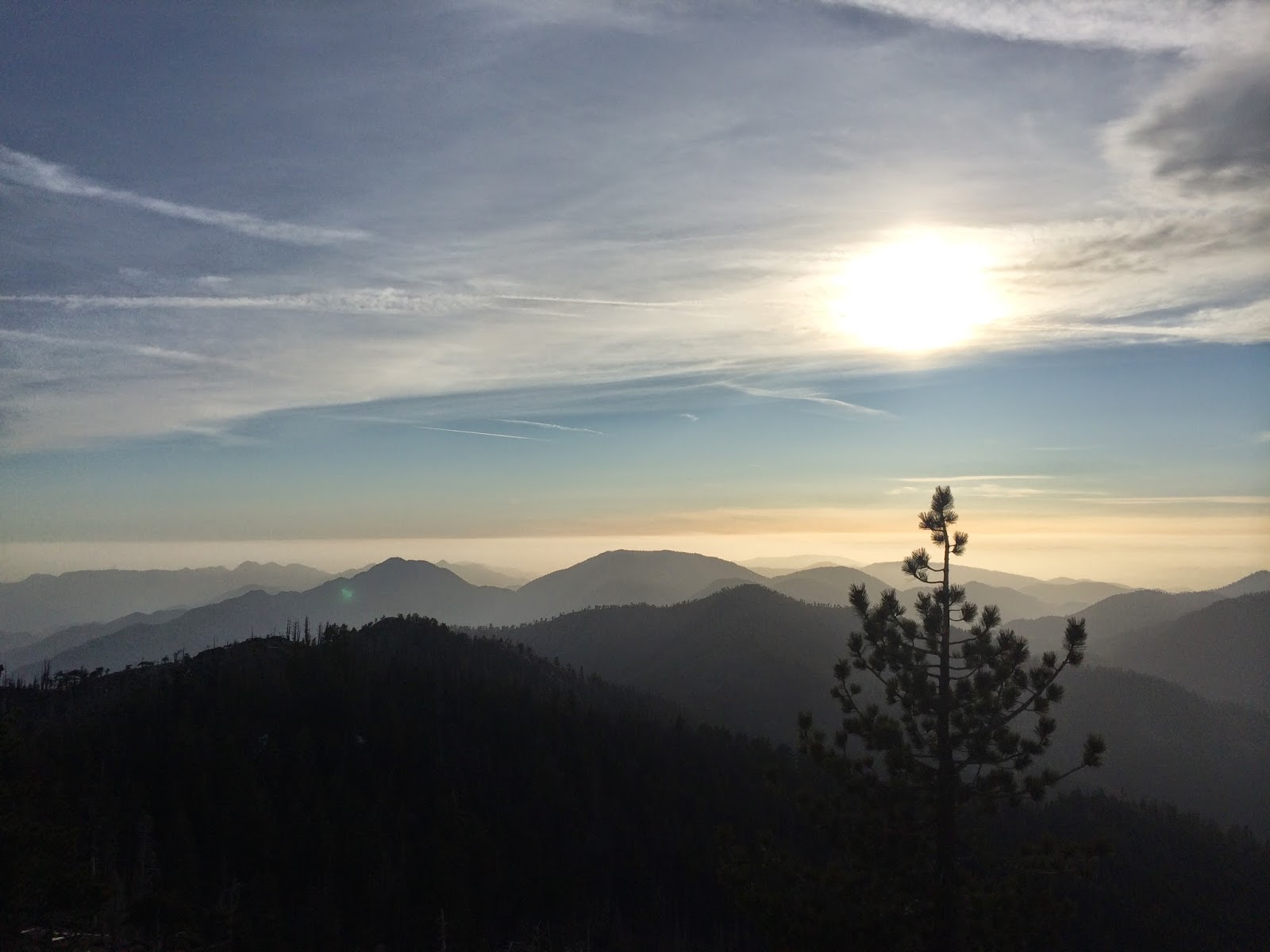 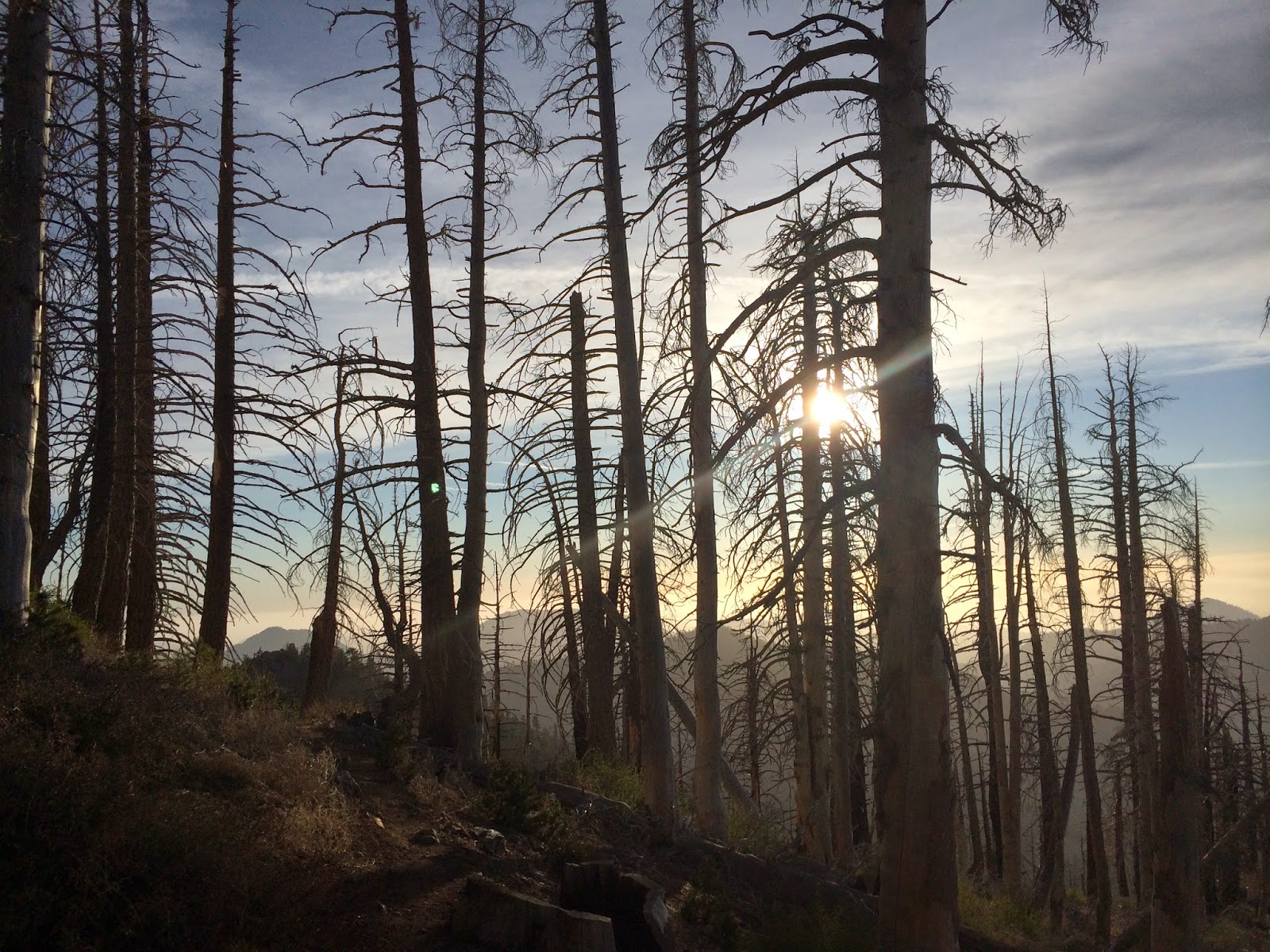 Posted by dirtmonger at 9:26 PM